The Blood, Sweat, and Tears of Building a Fitness Chain from Idea to 100 Locations

by Shannon "The Cannon" Hudson 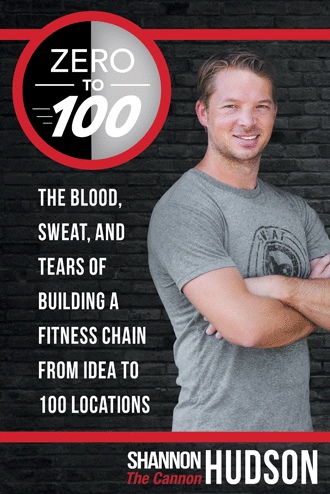 Even after I got married, I was still pursuing a fighting career part time. That’s sort of an oxymoron because really, it’s terribly difficult to pursue a fight career only “part time”. Full time is really the way to go but I had the Karate school I was running and a new family to support, so full time fighting wasn’t really a luxury I could afford. My passion for fighting had to be a part time venture. The closest place I could get any type of legit sparring with other boxers was right outside of Atlanta in Decatur, Georgia. This was a two and a half hour drive, one way. But, I would make my way down and back in one day at least once a week, sometimes twice, especially if I was close to an upcoming fight. The legendary Xavier Biggs was my boxing trainer and I’m still honored to have been able to fight under his coaching.

Mr. Biggs’ gym was the real deal. It was quite an experience just to walk into because it almost felt like stepping into a time warp when you entered. He had the real brick, autographed posters peeling off the walls, a huge roll up garage door, jazz music playing, timers ringing, no AC, and a real boxing ring smack in the middle. Various hanging punching bags surrounded the ring. Most people have heard of a heavy bag or speed bag, but probably not the double end ball, wrecking ball and uppercut bag, to name just a few. Each bag serves a different purpose for a fighter by training a different boxing move and therefore works a different part of the body.

Now, I would usually leave early from Greenville and get there midday so that I could spar and then leave to get back home by late afternoon to teach classes at the Karate school. So I was often there to see a ‘lunch crowd’. What I mean by that is, while I was up in the ring doing full contact sparring I would see executive businessmen come in, change out of their tie and nice shirt and hit the bags, never stepping into the ring at all. Then they would change, and go back to work. They were only there for a quick workout on the various bags. No contact. I was intrigued.

I would drive back home and have plenty of time to think. I would think about what I should have done better in the ring and all the pointers Biggs had given me while I was there. I would also think about business. At the time all of this was happening, I noticed a women’s only fitness chain called Curves had grown to ten thousand stores, the largest in the world. My entrepreneurial engine was revving up again. This concept really intrigued me. I loved the idea of a small space such as 1200 square feet and a circuit training model where the customer was never late to a class and could just show up and get started. It just seemed to make so much sense, seeing how busy people are, and the fact that the workout was only thirty minutes made the program very marketable. Once, I even went into a Curves location and pretended to be asking for information for my mother. I also had my wife call and get some information. Sometimes you just gotta do what you gotta do. Right? I just had to learn more about how they ran their operations because a twist on that concept had started to form in my mind. I thought, I could use the same circuit format that Curves uses, seeing as that isn’t proprietary in and of itself, but spice it up by making it a thirty minute kickboxing workout. The potential seemed unlimited and I soon became determined to make it work.

Our kickbox fitness classes in the Karate school had always been forty five minutes, but following the lead set by Curves, I knew I could find a way to pare it down to thirty minutes. That’s how we got the name 9Round. It’s a nine round (station) workout with 3 minutes each round times nine stations is 27 minutes, but factor in the 30 second active breaks between rounds, and you’ve got a 30 minute workout. (Don’t tell anyone, but it’s actually 31 minutes!) Heather and I actually thought of several other names for the business. Golden Glove was one that we sat on for a while, but it just didn’t stick. 9Round felt like the right name and I felt like a workout packaged the way I was envisioning was sure to be ground breaking.

Shannon “The Cannon” Hudson could have stopped pushing so hard after becoming a world champion kickboxer. But he was just getting started. /

Using every penny he could find, he teamed up with his beautiful wife, Heather, to turn an idea for a fitness center into a profitable business with one hundred locations in only five years.

He reveals how he built 9Round Fitness into a booming business and shares “knockout nuggets” of wisdom, including:

• Trust your gut, even if it makes others uncomfortable. Your gut, or your heart, is your inner voice—and you must trust it.

• Know the score every day. The only way to keep score in business is with money. Check the bank account daily.

Too many people fail because they’re unable to pull the trigger. Hudson also explains how he started his business with no credit and no money and reveals the strategies he used to knock out the corporate Goliaths seeking to cut in on his territory.

Whether you want to start a business, purchase a franchise, or need advice on chasing your dreams, you’ll get practical guidance on achieving your goals with Zero to 100.

Shannon The Cannon Hudson is a world champion kickboxer, has a fifth-degree black belt in Japanese Shotokan Karate, a fourth-degree black belt under the Joe Lewis Fighting System, and a college degree from the University of South Carolina (Spartanburg Campus). He is the founder and CEO of 9Round, one of the fastest-growing fitness franchises in the world. He lives in Simpsonville, South Carolina.