Thanks for the Pain 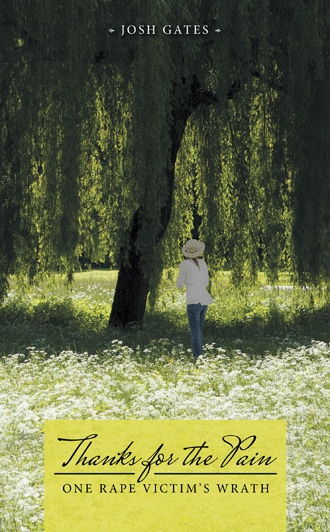 In the midst of the heartland sat an average-looking house, inside of which existed a remarkable spirit. His name was Stupid. All of eight years old, Stupid couldn’t remember a life outside the basement of this average-looking house. Stupid had long been tormented by a peculiar and agonizing feeling in the pit of his stomach. He’d never understood exactly what he was feeling inside, but he was intricately in touch with its agony. This feeling would emerge every time the light would beam down into the room when his father opened the basement door. Unfortunately, the feeling would be crushed and sink back into the pit of Stupid’s stomach when his father would slam the basement door shut. Sometimes, after Stupid had begged for several hours, his father would leave food for him, but other times his begging would lead to a beating. He could remember a few times when the beatings were so severe that he did not eat for days. Not that he wasn’t hungry, but so beaten he was that he could not make it to the top of the stairs to receive his food, and by the time he finally mustered the strength, the food had spoiled.

Oddly enough, Stupid looked forward to each beating, as this was the most time he was able to spend with his father. Even though the pain was excruciating, he would grab hold of the happiness of spending those moments—those few seconds prior to the initial blow—with his father. Stupid often wished his father would come to him with good intentions rather than the pain he brought. Stupid always held on to the hope that the feeling hidden deep inside him would someday come out and introduce itself, as an old friend might after they’d spent years apart. He wished every day to know his feeling better, but with each slam of the basement door, the feeling would diminish even more.

Stupid would speak to the dark objects in the basement. The stairs and the cold floor became his friends. He would speak to his friend Floor often, as it was he who held Stupid at night. Floor would tell him stories about how safe it was in the basement, away from the evils of the outside world. Stupid’s dreams were filled with as much imagination as a boy locked in a basement could possibly have. He felt safe in the cold embrace of his friend; Floor would wrap young Stupid tight in the cement dust that hovered over him when he lay down.

Stairs was the louder of Stupid’s two friends. She was always waking Stupid up, encouraging him to get his food or to run to the door when he heard a noise. Whenever Stupid found a bug, such as a fly or a cockroach, he would rush it to the top of the stairs. Always cordial, Stupid would introduce the insect to his two friends and then set it free underneath the basement door. Whenever Stupid did this, Stairs was proud; she would tell the boy that she wished she could make him as small as those insects, so he might enjoy the mysteries of the great beyond. Sadly, Stairs could never say this without being immediately contradicted by Floor.

Stupid often had to get between his two friends, as they were always arguing. Both wanted what was best for him, but they were often on different sides of the argument. Stairs would talk about leaving and urge Stupid to think of a way out, whereas Floor would talk about the safety that existed in the darkness. Stairs would talk to Stupid about what was beyond the door, and even beyond the house. The thought of going beyond the house was outside Stupid’s realm of comprehension, but it did appeal to what little imagination he possessed. As with most of their conversations in the basement, he would end up discussing his unknown feeling. He often told his friends that not knowing his feeling was like holding a box and knowing every part of it except for what was inside.

If Stupid ever knew joy, it was in a voice he had heard just a handful of times in his young life. He could not quite remember the first time he heard the voice, but it always brought him overwhelming feelings of both joy and sadness, and it would often bring hope to his desire to know what lay so deep inside him.

On a cold and dark night, as all nights were for Stupid, he once again heard the voice. Excitement and anticipation yanked him straight out of his cold slumber as he tossed away the dust and sprang to his feet. He crept up the stairs quietly, so as not to anger his father by causing the wooden treads to creak. He could smell her perfume as he sat quietly on the top stair with his ear pressed against the cold, hard door. In his mind, it was the voice of an angel. Her voice and smell were so familiar to him that it was almost as if they were intertwined with his feeling.

Stupid then heard his angel say, as she did each time, to his father, “Where is Patrick? Where is my son?”

His father replied, as he always did, “I wish I knew.”

Soon, after another brief conversation, the angel left.

It was during the hours after these brief visits that Stupid’s imagination was at its most creative. Sadly, it was also after these visits that Stupid would sustain his most severe beatings. Somehow, during the thrashings, he would imagine playing with Patrick while his father and the angel looked on. While lost in these beautiful thoughts, and without making a sound, Stupid would cry, his tears drenching his bloodstained, battered T-shirt. Stupid longed to meet this Patrick; he wondered if they could be friends. Perhaps Patrick would know about Stupid’s unknown feeling. Stupid would end each night with a prayer that his angel would someday find her Patrick.

Scarlett was just shy of her thirteenth birthday when her mother, Staci, abandoned the family. Scarlett and her father, Jacob, are forced to co-exist in their grief. Five years later, Staci dies, leaving her husband and daughter to wonder what has transpired in the intervening years.

After the funeral, Jacob decides it’s time to introduce Scarlett to his extended family via a scrapbook of stories—he fails miserably. Scarlett’s wit sees through her father’s deceit to the truth about her mother’s abandonment of them. The pain of this truth and Jacob’s continued efforts to hide it from his daughter lead Scarlett to emotionally abandon her husband, Michael, at a time when he needs her most.

Scarlett’s attempts to cope and heal result in dangerous choices for herself and her son Bailey. Eventually, Scarlett finds a kindred spirit in a young woman named Jade. With the help of her mother’s words and an incredibly adaptable spirit, Scarlett attempts to make sense of a life filled with pain.

Josh Gates earned a bachelor’s degree in criminal justice from Saint Cloud State University. A welfare fraud investigator in Golden, Colorado, he is a former probation officer for the State of Colorado and served in the US Army Infantry and Intelligence. Gates and his wife are parents to twin boys.