I am Jesus (not the Christ)…so are you the saved 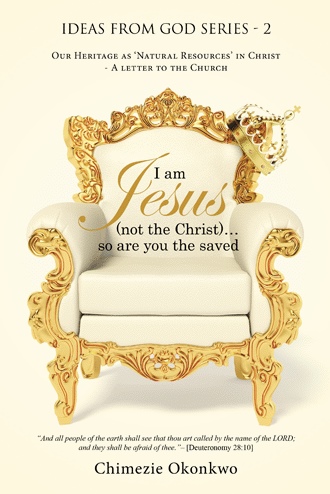 The place of Name:

Jesus signifies stewardship. Jesus – Son of God was Jesus the ‘man of God’ and most importantly the servant because he was born with the character of stewardship and an attitude of servitude. Jesus as the Son of God identified us equally as the sons of God. In [John 14:12-14] Jesus said “Verily, verily, I say unto you, He that believeth on me, the works that I do shall he do also; and greater [works] than these shall he do; because I go unto my Father. {Verse 13} And whatsoever ye shall ask in my name, that will I do, that the Father may be glorified in the Son. {Verse 14} If ye shall ask anything in my name, I will do [it].” So why did Jesus say “and greater works than these shall he do?” Why would we be able to do greater works than the Son of God himself? This is because we as the Jesus on the earth today have overcome by the power of Christ (the resurrected Jesus) in the new and recreated Jesus (Christ) living in us. It is because we have absolutely no restrictions whatsoever stopping or hindering us from doing greater works than Jesus did because we do all in his name. In the middle of this Scripture above, Jesus said “…He that believeth on me…” and the word ‘He’ starts with a capital ‘H’ because this I believe was to lay emphasis on our new authority as Jesus. Jesus had to go through the ordeal and searing pains of the Cross of Calvary and although we don’t have to do the same, yet to prove his love for us we may be required to go through some challenges sometimes for the glory and love of God to be revealed in and through us. This also means that although we may sometimes experience these challenges, we are not hated by the Lord and it does not make Jesus’s works null and void or invalid or devoid of power to deliver but what it does explain is that in all and through all we are more than they that have already conquered - [Romans 8:37]. This means that we are more than just one man because of the authority in the name of Jesus and the power of the Calvary’s Cross on which Jesus was slain, although the Cross posed a kind of barrier to Jesus. It really did! That was why on the way to the Cross Jesus ‘kneeled’ down to pray to the Father in [Luke 22:42] - “Saying, Father, if thou be willing, remove this cup from me: nevertheless not my will, but thine, be done.” Then an Angel came to strengthen him in the following verse, yet in agony Jesus prayed more earnestly. Jesus clearly saw the Cross as a hindrance, yet he understood that the will of the Father must be done. The sacrifice on the Cross of Calvary tried to stop him, however Jesus came out victoriously that we might take up his name and reign in the earth [Revelation 5:10]. Therefore the name of Jesus being the name of God and man (as already stated above) is more than just one man because God represents the Trinity (three persons in one God) and because we bear that name Jesus, hence we are more than mere conquerors. The name of Jesus is not for Christ because he is called Christ, it is not a name for a ‘psychological spiritual man/being’ called Jesus, it is for us. Furthermore while Jesus was on earth, Jesus could still not do any mighty works in Nazareth because of their unbelief [Matthew 13:58] and [Mark 6:5-6]. This was somewhat a form of restriction or barrier to him and if it wasn’t, then Jesus would have performed miracles in Nazareth; after all he was both God and man so why not?! No wonder Jesus said “Verily verily, I say unto you, He (again notice that the ‘H’ is in capital letters because Jesus knew we must take up his name and earthly position here on earth with his Spirit in us if only we believed on him) that believeth on me…[1 John 14:12-14]”. In the book of [John 6:47] Jesus said “Verily, verily, I say unto you, He (again ‘H’ in capital letter) that believeth on me hath everlasting life.” Jesus always reemphasized the truth by using the word ‘verily’ twice, thus - ‘verily verily’ and the word of God makes it clear that although Jesus was referring to us; starting the word ‘He’ with a capital letter ‘H’ gives us a lead to function in his name. It was not an error, neither was it an insult to him that we should bear his name and authority. So we only have to believe in Jesus to become like Jesus and even ‘better’ than Jesus was on the earth (by the divine power of salvation) for us to be empowered to do ‘greater works’ than Jesus did. This is only possible because we have greater power now than Jesus while he was ‘on earth’ since he died and rose from the dead for us, yet nobody equipped Jesus similarly by dying for him because he was the power of God and also because he came to fulfil the will of God as established in the Holy Scriptures. For instance because Jesus died to give me strength in his name, it then goes to say that the name of Jesus has the power and authority to heal me of any disease as well as to keep me in health more than any false power or false authority that the devil may be exercising as a weapon used to afflict the people of God.

By the power in his name and as the present ‘Jesus’ in the earth, believers carry and represent light anywhere we are and everywhere we find ourselves. The Holy Bible says (actually Jesus said this himself) in [Matthew 5:13a and in Verse 14] – “Ye are the salt of the earth: {Verse 14} Ye are the light of the world. A city that is set on an hill cannot be hid.” As the salt of the earth and like Jesus did, we give taste to the world. Again, Jesus never said ‘Ye are the “whites and blacks” of the world’, he said “light”. He knew what he wanted to say and said it, Jesus was very conscious of his words. The glorification of Jesus quickened us to assume his earthly office and ministry. Jesus called himself “light” and called us “light”. So we are truly the Jesus of now by the power of revelation in his name. This can be verified in [John 9:5] where Jesus said – “As long as I am in the world, I am the light of the world.” Jesus said ‘as long as I am in the world’ because immediately he ascended to God as Christ and Lord, with he (as a Spirit) in us we automatically became that light…bearing his name and same authority, doing exactly what he did and even more. So we know that Jesus called us ‘light’, just as the word of God called Jesus ‘light’. So we now represent Jesus as light since [1 Thessalonians 5:5] confirms - “Ye are all the children of light, and the children of the day: we are not of the night, nor of darkness.” ‘Light’ here I believe connotes salvation, which means we are the children of Christ since Christ is the horn of our salvation - [Psalm 18:2] and like begets like. That means our salvation was made and moulded in Christ from Christ. Subsequently if Jesus did not resurrect from the dead (as Christ), salvation would have had no life and meaning in it. Without salvation Jesus’s name would have had no power in it and would have been like any other ordinary name as already explained from the introduction of this book. Therefore the power in that name was grafted in us through salvation and Jesus had no choice or any other option to reject being used by God for this selfless and compassionate purpose because... 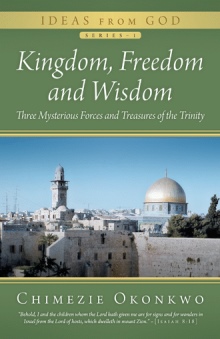 ‘I am Jesus (not the Christ)…so are you the saved’ is a very complex message to attempt to convey to any audience (particularly by a student of the Holy Scriptures) but Chimezie Okonkwo is an author endowed by God with such exceptional talents and gifts on inspirational/motivational titles and is devoted to taking on the complexities in the Christian doctrine and detailing/exposing them to the locked mind, thereby engaging his readers with the realities of his messages strongly embedded in the word of God and some personal testimonies.

In this book he identifies with clear understanding the divine nature of the different meanings attached to the name of Jesus and beautifully narrates them both from a natural (physical as man) and equally from a supernatural (Spiritual as God) perspective.

From the natural (physical) realm Okonkwo narrates Jesus as the ‘man of God’ who walks the earth bearing witness of the glorious gospel and from the supernatural (Spiritual) realm through discernment Okonkwo identifies Jesus as the ‘God of man’ who will come (again) to judge the living and the dead. Jesus Christ being both man and God fulfils this character thereby satisfying both personalities observed in this masterpiece. Okonkwo exploits his ideas from God in depth through this endeavour and does it exceptionally well indeed.

Chimezie Okonkwo is a student of the word of God and has attended lectures, seminars and conferences on the Christian or the believer’s faith. Okonkwo attended the London Metropolitan University where he gained a Master’s degree in Management, he is a Camp America alumni.

Okonkwo is blessed and functions with an array of gifts and talents which include as an artist, author, minister, composer and poet.

Chimezie Okonkwo is the author of the ‘Ideas from God’ series, under which his first title ‘Kingdom, Freedom and Wisdom’ was published. This is his second book on the series. Okonkwo currently resides in London with his family.