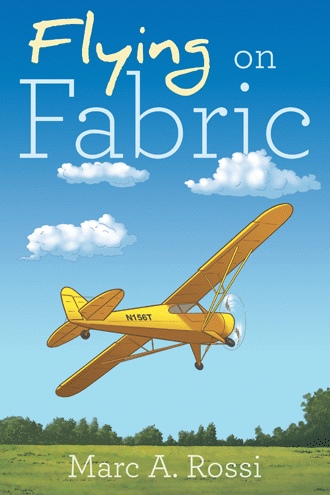 Sunlight streamed through the door, illuminating the inside of the hangar. Ann was startled and temporarily blinded by the light. Attempting to get out of the hangar as quickly as possible, she ran toward the door but stumbled into the crop-dusting plane and lost her balance. Her instincts took over, and she stuck out her hand in an attempt to break her fall. It was too late. Ann heard a horrible ripping sound as she hit the floor.

Ann stood up and stared in disbelief, first at a large gaping hole in the wing of the crop-dusting plane and then at the screwdriver stilled clutched in her hand. She had accidently plunged the screwdriver into the wing, tearing a large gash in it as she fell to the floor. She’d had no idea that the wing was covered in fabric instead of metal and couldn’t believe a screwdriver could do that much damage to an airplane.

Looking up, she could see a man framed by the light of the door, but she couldn’t make out his face. It must be Jack, she figured, but it really didn’t matter. Whoever it was, she was quite sure his appearance was going to mean big trouble for her …

As if being thirteen is not hard enough, Ann Wilson has just moved to Indiantown where she knows no one. One day while on a dare from some rambunctious boys, Ann sneaks into a crop duster’s hangar to steal something. After she nabs a rusty screwdriver, Ann mistakenly thinks she has been successful—until the cantankerous old crop duster, Jack, catches her in the act, causing Ann to accidentally damage his plane while making her great escape.

With help from the police, Jack demands that Ann repay the damage by working at his hangar. After Ann reluctantly shows up for her punishment, she learns that his son died in World War II and that Jack blames himself for his death. But when the ornery boys return to crime scene to inquire if Ann was caught, she is too proud to admit it and impulsively tells them she is at the hanger for flying lessons. As Ann discovers the wonders of aviation, only time will tell if she can convince Jack to overcome his grief and help her fulfill her dream.

Flying on Fabric is the engaging story of a teenager’s determined quest to learn how to fly, but only if a grouchy crop duster finds it in his heart to teach her.

Marc Rossi is a West Palm Beach attorney. When he is not practicing law, Marc can be found flying above the beaches of southern Florida in his red biplane. Flying on Fabric is his debut novel that he hopes will foster an interest in aviation among young people and encourage them to follow their dreams.