The Jigs & Juleps! Girl: Her Life and Writings 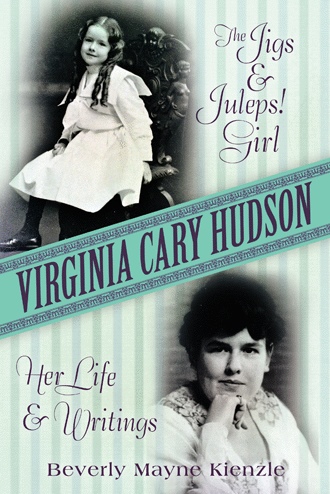 Taken from pages xvi-xx, Virginia Cary Hudson In October 1952, the third floor and attic burst into flames at 1453 St. James Court, Louisville, Kentucky. I have no memories of the fire occurring. My mother wrote an account of what she learned from letters and calls between Kentucky and Maryland. Early in October, I believe to be exact it was the eighth day of the month, the year 1952 and very early in the morning, my sister smelled smoke. She went down to the second floor and called my mother. It was then that the Louisville fire department was called. They arrived, went over the house, but couldn’t find anything alarming. While they were standing in the second floor hallway talking to mother, the attic section under the roof burst into flames. One of her letters describes this, and it reads “the whole roof burst into a mass of flames with a roar that sounded like an explosion.” When the fire chief arrived, my grandmother sat silently. When he asked if she would feel better if she spoke, she replied, “I told him I was talking all the time, talking to the Lord.” My mother attempted to describe the impacts of the fire: You can well imagine what happened to the old trunks, grandmother’s beautifully and carefully wrapped contents, the chintz-covered scrapbook and the rest. They were gone, and very quickly. The water damage to the entire house was horrible. Without a shadow of a doubt this event shortened my mother’s life, but even in the face of all this destruction the closing sentence of her letter read, “By Christmas everything should be in order.” … When my mother and I arrived on the train for our Christmas visit in December 1952, my grandmother managed to greet us with a humorous anecdote about the fire. . .Less than two years later, Virginia’s life ended suddenly just before her sixtieth birthday. My mother vowed to publish my grandmother’s childhood essays and other captivating writings, including the scrapbook of poems and drawings my grandmother had made for me after the fire. Publishing my grandmother’s works would achieve a victory against destruction and loss. After many rejection letters and innumerable prayers, four books were published by major presses. In the frequent talks my mother gave at book signings for O Ye Jigs & Juleps! and for the other books, she was compelled to answer questions that shocked, angered, and hurt her so deeply: Had Virginia Cary Hudson really existed? Had she really written the essays in O Ye Jigs & Juleps!? Could my mother prove there had been a damaging fire? My mother obtained a letter (July 26, 1962) from Citizens Fidelity Insurance Company to certify that the fire occurred. The letter’s author recalled that he himself “came out with an adjuster and arranged for settlement and repairs.” Aware and wary of the damage that could be done to treasured papers, my mother entrusted the pages from my grandmother’s letters about the fire to the Kentucky Historical Society. Most readers of my grandmother’s writings want to know more about Virginia Cary Hudson’s life—her childhood; her family; her marriage to a thoroughbred horse trainer; her teaching and preaching in Louisville, Kentucky; and her travels to racetracks in the United States, Cuba, Mexico, and Canada. Her warmth and humor delighted family and friends all her life. She empathized with the joys and sorrows of the people around her. She grasped the essence of their individuality and expressed it not only in the essays she wrote as a child but also in her adult talks for church audiences and in the many letters she wrote. Sharing memories of my grandmother’s life will, I hope, delight readers and quiet doubters who contested—much to my mother’s heartbreak—whether Virginia Cary Hudson ever lived or wrote the childhood essays in O Ye Jigs & Juleps!, the very writings that my mother discovered in my great-grandmother’s trunk in the attic at St. James Court in 1952. My mother was determined to answer the skeptics with a biography of Virginia Cary Hudson, with the story of publishing her writings, and with the publication of my scrapbook and the letters to me. However, Alzheimer’s disease sadly brought her work to a halt. This volume carries forward the work that my mother began. It represents the first biography of Virginia Cary Hudson and contains works of hers published for the very first time: prayers, letters to me from 1951 to 1954, and the scrapbook she made for me and brought to Maryland in the summer of 1953.

An engaging and enchanting journey into a world of letters that will inspire and edify all those who love writing.

Recanati Professor, Harvard Medical School, coauthor with Dr. Pamela Hartzband, "Your Medical Mind: How to Decide What is Right for You."

Beverly Mayne Kienzle grew up surrounded by papers and manuscripts containing the remarkable writings of her grandmother Virginia Cary Hudson Cleveland, still unpublished at her death in 1954. Beverly's mother, Virginia Cleveland Mayne, devoted herself to publishing those works.

That manuscript, O Ye Jigs and Juleps!, sold for $2.50 and made its first—of sixty-six—appearances on the New York Times Best Sellers list on May 27, 1962, and three other books followed. Kienzle now returns to her roots and tells the story her mother started but never finished, the biography of Virginia Cary Hudson, a "girl who grew up preaching."

In this authoritative biography, Virginia Cary Hudson, Kienzle recounts the career and family life of Virginia Cary Hudson. With warmth and humor, she reveals her grandmother's incisive observations of humankind, from simple folk to big-time gamblers, in places from Kentucky to Havana and Las Vegas. The letters and the scrapbook Beverly's grandmother completed for her, with its charming poems and drawings, appear in print for the first time, as does the narrative that Beverly's mother began in order to tell the poignant story of publishing a best seller.

Beverly Mayne Kienzle is a retired Harvard professor and international authority on medieval women and preaching. She lives in Cambridge, Massachusetts, with Edward, her husband of forty-six years; Kathleen Cary, her daughter; and several animal companions.