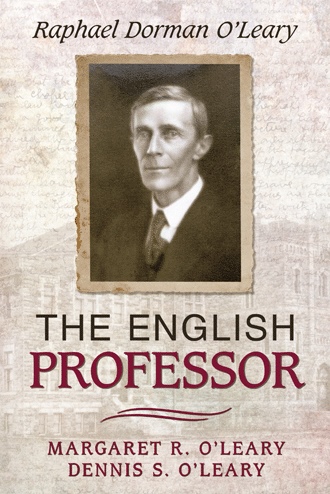 Across the span of more than forty years, Raphael Dorman O’Leary, a professor of English rhetoric and English literature, taught his students at the University of Kansas to think straight, to put sinew into their sentences, and to embrace the magnificent literary treasures of their mother tongue. The English Professor, by authors Margaret R. O’Leary and Dennis S. O’Leary, offers a narrative of the life, work, and times of a revered Midwestern university English teacher.

This memoir narrates how the professor, born in 1866, was raised on a Kansas farm in the post-bellum era. Like his father before him, he was committed to a life of learning and teaching. His colleagues knew him for his unpretentious exterior, honesty, and integrity, and his flashing anger at cheapness, vulgarity, pretense, and, above all, charlatanism. When Professor O’Leary died after a short illness in 1936, his personal effects passed through two generations to his grandson, Dennis S. O’Leary, who, with his wife, Margaret, discovered his papers while restoring a family house. The trove of material served as the core resource for the compilation of The English Professor. It provides insights into the histories of Kansas and the University of Kansas and of Harvard University, as well as perspectives on higher education, including the teaching of English rhetoric, language, literature, journalism, and oratory in the United States.

Margaret R. O’Leary served for many years as an attending emergency physician in several academic and community hospitals and as a professional writer. She lives in Fairway, Kansas.

Dennis S. O’Leary served as a medical executive at the George Washington University Medical Center (1971–1986) and as president of the Joint Commission(1986–2007). He lives in Fairway, Kansas.