What the Enemy Thinks 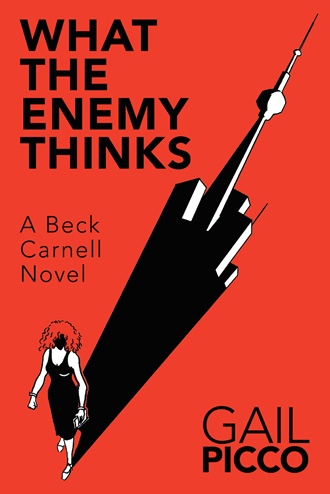 The elevator bumped to a nauseating stop at the third floor with Beck already regretting the decisions she’d made so far today. She cursed herself for not having left the Blue Door until MSNBC’s Rachel Maddow Show was over at ten o’clock. That meant steady drinking with no dinner from about six to ten. Who in their right fucking mind does that? Did she have to make everything worse on herself by drinking on an empty stomach in the middle of the week? And the news about Sam wasn’t good. It was, in fact, terrifying, but she had to put that out of her mind now. Instead, she added up the firm’s monthly billings in her head like a child lumbering through her multiplication tables.

She had the cab drop her off at Starbucks, where she picked up a cup of tea and walked with hundreds of other people heading to work, most of them with their heads down, a lot of them on their phones, either texting or talking. When she saw a reflection of herself in a shop window, she stopped with a jerk and a sharp intake of breath.

November being the soul-destroying month it was, when Beck had opened her closet door in the morning, sick with a hangover, she’d decided she wanted a pick-me-up, something colourful to brighten her mood. She’d chosen a layered floral crepe skirt topped with a white long-sleeved tee, and a cable-knit sweater with toggle buttons. She’d accessorized with ankle-length Frye boots made from white distressed leather and pulled her hair back into a soft ponytail resting at the nape of her neck. Now she couldn’t quite fathom what she saw—a briefcase-toting cheerleader wearing a set of Laura Ashley curtains looking out at her with a horrified expression on her face.

She put her head down and marched quickly to her office. The skirt that had felt light and playful when she put it on this morning was bunched up and stuck to her thighs with static electricity. Every little shock caused her neurons to fire pissed-off messages to her brain. Sitting down at her desk, she pulled open drawer after drawer, looking for the spray can of Static Guard she knew she had in there somewhere. She found it at the back of the bottom drawer, gave her skirt a couple of sprays, and watched it float back down to her knees. The panty hose she didn’t know why she had put on this morning made her feel like ants were crawling over her legs.

When she turned to check her email, her skirt started bunching up again. The bulky sweater rolled up around her middle, and her panty-hosed legs looked like two broomsticks shoved into white majorette boots, which, on their own, looked as if they belonged in the Santa Claus parade. She stood up, grabbed her bag, and marched out of the office.

With the sidewalks less packed, the street revealed itself to be a mess of construction, and Beck’s senses felt the full assault of it. Backhoes picked at open scabs of pavement. Cranes pierced the foggy mist like hypodermic needles. The huge crater at the end of the street, destined to become an underground parking garage, was symbolic of a city whose very core, much like her own, was in the process of being hollowed out and excavated.

She made her way up to Queen Street and walked into a shoe store, where she tried on and bought a pair of black leather lace-up boots and thick socks. She wore them out of the store. In the next shop, she tried on a pair of black jeans, a thick leather belt with a heavy buckle, a slate grey silk-and-cashmere-blend pullover, grey silk scarf, and a tapered hip-length black leather jacket. She walked out of the dressing room with the clothes on, paid for the outfit, and asked the clerk to cut off the tags. She stuffed her old clothes into a shopping bag. As she walked out the door, a garbage truck pulled up to collect the hundreds of bags of recycling that had been piled up on the sidewalk the night before.

“Can I throw this bag up there?” Beck called out to the guy who was tossing the recycling in the back of the truck.

“What’s in it?” he yelled so he could be heard over the screeching of the truck as it crushed its load.

“Clothes,” she yelled back and walked toward him.

“Okay,” he said, pointing to the gaping steel mouth on the back of the truck, “fire away.”

Beck heaved the white plastic shopping bag containing her skirt, sweater, boots and panty hose into the back of the truck and watched with satisfaction as it was flattened to a pancake and rolled out of her sight. She had absolutely no time for clothes that did nothing for her.

Beck Carnell is a driven CEO whose upbringing in the fishing village of Herring Neck, Newfoundland, both haunts and comforts her as she battles her demons and her rivals in a world where misery translates to fundraising opportunity. The marketing press calls Beck’s Toronto firm, Social Good, “an edgy, dynamic shop catering to charities and interest groups.” Together with a team comprised of talented political organizers, social media sages, and newcomers seeking success, Beck attempts to carve her way through both personal and professional challenges in the murky waters of modern-day faith, hope, and charity. Now only time will tell if she can simultaneously save the world, her firm and her sanity as she copes with heartbreak, wades through the stickiness of childhood memories and fights for what she sees as justice. In this dark comedy, a shrewd charity marketer on a fast-paced journey to achieve professional triumph is forced to walk a fine line between her past and present, ultimately discovering the true meaning of unconditional love.

Gail Picco is an award-winning fundraising and communications consultant who ran a consulting firm for sixteen years. She has designed and executed advocacy and fundraising campaigns for some of Canada’s largest charities. Her blog, yourworkinggirl.com, offers commentary on media, marketing, and the nonprofit sector. She was born and raised in Newfoundland, Canada.