What Would You Regret Not Doing in Your Lifetime? 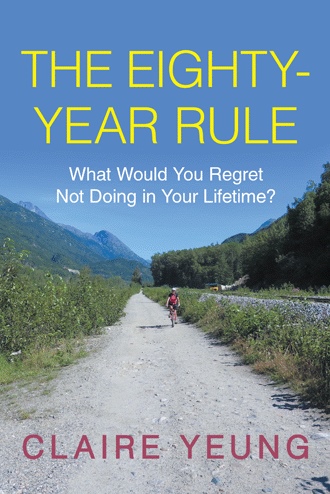 I had been an attorney for 23 years when in March 2012, while training for the Vancouver International Marathon, I got sick. All of a sudden, I couldn’t run one mile, let along 26.2. Bam! I was suddenly stopped dead in my tracks. I found that I had no energy whatsoever. I could hardly get out of bed. My doctor had me tested for everything under the sun. Maybe it was a thyroid issue; maybe it was an autoimmune disorder; maybe it was a virus. No one knew what was actually wrong with me. After six months of endless medical tests, my doctor decided I probably had some sort of virus, which was really code for “we have no idea.”

Being an endurance runner made me feel strong, capable and confident. When I started experiencing health problems and lost the ability to run, all of a sudden I felt incredibly vulnerable, like I’d lost my mojo. Those six months made me reflect upon my life’s purpose and why I was here on this earth. What was I doing to make the world a better place? What was my true calling? Being an attorney had never been my dream career. It was just a job where I could earn a good living. I was 50 years old and in a job that I didn’t love, waiting out the next 10 years for retirement. Wow, how the hell did I get here?

Let me tell you my backstory to put things into context. I was born in Hong Kong in 1962. Typhoon Wanda blew through town the day after I was born. Wanda blew the roof off the hospital, forcing my mom and me to evacuate. This event was a foreshadowing of the tumultuous times ahead for Hong Kong in the 1960s.

Fast forward forty-odd years. How did I end up in a career that I wasn’t passionate about, working just for the money? As the saying goes, hindsight is 20/20. Looking back at the first 50 years of my life at what I thought was the why behind my parents and grandparents decisions, I now see how totally off-base I was. I’d lived the first half of my life thinking that my life’s purpose was to regain the affluent lifestyle that we’d enjoyed in Hong Kong. I believed that my parents went back to university to get their master’s degrees to further their careers so that they could make more money. Yes, that was part of it, but the part that never dawned on me was that they loved their work and wanted to be the best they could be. My mom is a really accomplished woman. She was the first Chinese woman to be appointed principal of an elementary school in the Vancouver School Board; she had been a lecturer at the University of British Columbia, and she was an expert on teaching children with learning disabilities. My dad loves information. He reads the newspaper, watches the news and loves to amuse people with tidbits of miscellaneous information. He is also one of the kindest people I know.

For me, becoming an attorney was just something I sort of fell into. None of the careers available to business school graduates really interested me, so going to law school was a good way to put off “getting a real job.” After law school, I ended up practicing law in the areas of human rights, labour, and employment—interesting enough but certainly not work that I had a burning passion for. The income was good, so I didn’t think about whether I actually enjoyed what I was doing. I was totally focused on regaining the affluent lifestyle I knew as a child in Hong Kong. It wasn’t until I was struck by my mysterious illness that I started to question the why behind my life’s decisions.

My grandparents had the courage to start over in a new country. My parents built their careers from the ground up in a new country. My family lived by the sink-or-swim philosophy. You jump in with both feet and figure it out—no whining, no coddling, no feeling sorry for yourself, and, most of all, no crying.

I took matters into my own hands in September 2012 (just after my 50th birthday). I walked away from my six-figure job as an attorney. When I was feeling like the walking dead most days, I simply could not sustain the fifty- to seventy-hour work-weeks that my job demanded. I decided it was time for me to put my career on the back burner and regain my health. Was it scary? Hell, yes! But most of all it was like a giant weight had been lifted from my shoulders. It was incredibly liberating to simply walk away and not know what was next. No plan, no destination, just an open road. Here was my chance to figure it out. Sink or swim. I learned to adventure race at the age of 37 and ran my first marathon at the age of 48, so I chose to believe that at the age of 50 I could walk away from my job to find a more meaningful life. The only thing I knew for certain when I walked away from my job was that I wanted to do work that inspired me, that gave my life purpose and meaning, that truly helped others.

Wow, jobless at 50, with no idea what I really wanted to be when I grew up. Definitely not how I’d envisioned my life unfolding.

Have you ever wanted more out of life? Have you ever thought about following your dreams? In The Eighty-Year Rule, author and Certified Whole Person Coach Claire Yeung gives you the tools you need to live boldly and to dare greatly.

Through entertaining personal stories and professional experience, Yeung provides you with the courageous space you need to discover your authentic self, your purpose, and your passion, which seek to emerge from within, so you can make the most of every moment in your life.

With exercises included, The Eighty-Year Rule helps you assess where you are in life and offers steps and activities to help you get where you want to be.

“Claire Yeung’s The Eighty-Year Rule is more than a book, as it is an inspiring and practical guide to help you live your best life by making better choices along the way. I recommend it highly.”
—Robert Ricciardelli, Founder, Converging Zone,
and Owner, Choose Growth

“This clear, concise, and inspirational how-to guide will help anyone press the restart button on their own life and pay attention to what really matters: living boldly and daring greatly. A useful read for those who want to act on their own dreams.”
—Norman Nawrocki, Author, Cazzarola!

Claire Yeung is a Certified Whole Person Coach who walked away from her job as an attorney in 2012 to find her true path. Her e-courses can be found on her website: claireyeung.com. Yeung lives in North Vancouver, British Columbia, with her partner, Vivienne.