Flying without a Helicopter

How to Prepare Young People for Work and Life

by Joanie B. Connell Ph.D. 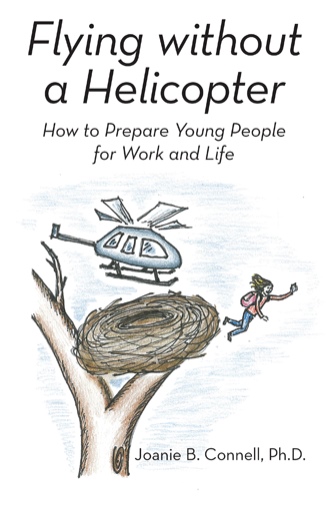 There seems to be a movement toward having perfect children. In the past, parents felt they had done their job if their kids made it through childhood. Things like getting married, finishing high school, and getting a job were important. Going to college was great, if you were so lucky to have a kid who was bright enough to get in and want to go. As time went on, for the middle class, college gradually became a standard expectation. Now, it’s not only expected that kids go to college, but also many of them are expected to go to graduate school too, and not any school will do.

It seems that kids today, unlike the rest of us, aren’t allowed to have strengths and weaknesses. To get into a good college, they have to be “super people” (Atlas 2011). They have to be strong at everything. If they get 80s in math, they have tutors to raise their grades. They need to have the lead part in the school play, be an all-star athlete, win an award for writing the best essay, be the president of one club or another, have the best exhibit at the science fair, and, on top of it all, be popular. Wow, that’s a lot of pressure!

How does this show up at work? To answer that, we need to take a step back for a moment. We need to ask ourselves if it is indeed possible to be a perfect person. Unless we have given birth to Leonardo da Vinci, the answer is probably not (and even he had flaws). Given that it is unlikely a person is strong at everything, it means they will have to work harder in some areas than others to be good at them. To be good at anything—really good, award-winning good—you have to work hard, even if you have natural talent. Lacking the natural talent makes it that much harder. Thus, to be great at everything will require an inordinate amount of work. For people who are naturally driven and gifted, this may be okay. They may not mind exhausting themselves to do what it takes to be great at several things (but no one can be great at everything).

People who are not naturally driven will want to find shortcuts. Even those who are driven and talented but are limited by the number of hours in a day may seek out shortcuts, which can include

realizing your teacher does not read the homework, so you do a sloppy job or don’t turn it in at all;

taking drugs to give you extra energy;

taking on leadership roles in clubs and not doing anything during your term;

having your parents do the work for you;

learning to talk your way into and out of anything; and

believing you are perfect and blaming any mishaps on external forces, not your own.

Lately, cheating has become rampant. Kids feel it is justified; they feel no remorse, not even when they get caught. For example, Nayeem Ahsan, a student at Stuyvesant High School in New York, was caught in a massive cheating incident on the Regents exams in 2012. He was sharing the answers on three different exams with 140 other students—and this wasn’t the first time he cheated. He had been collaborating with other students on tests and homework for quite some time. He was interviewed after he got caught, was suspended from school, and was waiting to find out if he would be allowed back. He mentioned he wished he had been cleverer so he would not have gotten caught, he felt justified in cheating because the pressure was too great and the teachers were too lazy to check, and he thought he should be allowed back at school. As for punishment, he said he had learned his lesson and he shouldn’t be punished further. He said, “The fact that I could have gotten kicked out, that changed my life” (Kolker 2012). He was shooting for a career in investment banking and wanted to expeditiously get back on track.

We are putting so much pressure on kids to be perfect.

We are going too easy on them when they get caught.

Nayeem got caught a lot earlier sharing the answers to homework on Facebook, but his teacher decided not to turn him in. Did he learn his lesson then? It seems the lesson he learned was to be more careful when cheating. Ultimately, however, the school did not agree he had learned the right lesson the second time around, and they kicked him out.

Joanie B. Connell, Ph.D., a talent management expert, asks the questions that others are too afraid to ask and makes connections others are too bogged down to notice to suggest how parents, educators, and managers can help young people excel in the workplace. Learn how to:
• produce healthy, independent, and self-reliant employees;
• prevent stress and burnout among twenty-something employees;
• help younger employees boost face-to-face communication skills.