A Team’s Journey to Winning It All

by Cassie Reilly-Boccia & With Kayla Braud 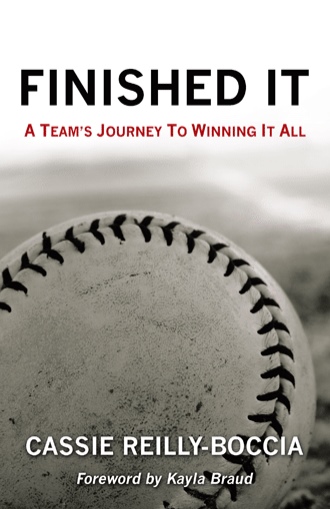 June 7, 2012 12:28 am I rubbed the skin of the bright yellow softball with my left hand. It had just come in contact with the damp grass after being hit in foul territory down the first base line. It hadn’t rained since the fourth inning and by now the field seemed back to normal for the most part. The excitement from the stands faintly echoed in my ear. I looked up at my pitcher, Jackie Traina, and said calmly, “Nice job Jack, let’s get this one right here.” ‘Let’s get this one.’ As if this ‘one’ was just another batter in the season. I’ve told her that hundreds of times in our two years playing together. ‘Let’s get this one.’ I jogged back to my defensive spot at first base. Strategically positioned for this particular batter, for this one. I glanced at the scoreboard before I turned around to get into my ready stance. It was the top of the seventh inning in the third and final game of the 2012 NCAA Women’s Softball National Championship Series. A best of three series between the softball programs from the University of Alabama and the University of Oklahoma. Each team had claimed one victory apiece in the previous two days. Two outs. Two strikes. As home team, the Alabama Crimson Tide was leading 5-4 and playing defense with the national player of the year at the plate for Oklahoma. As I watched the hitter step into the batter’s box and I looked around the field at my teammates,                             it was hard to believe that this would be the last game for me and the five other seniors. The last time we would wear the script Alabama “A” on our jerseys. Playing in a situation like this is like walking a tightrope in your mind. In order to stay balanced on the rope, you have to stay in the present. It requires the utmost sense of focus and control, all the while willing yourself to remain calm. I kept thinking to myself, ‘Stay in the present, stay in the present.’ Losing focus for a split second leaves you vulnerable and at the mercy of uncertainty. You become in danger of permitting a poisonous thought to creep into your mind; ‘We are only one strike away from winning a national championship.’ It approaches you like a whisper, almost too faint to recognize. The moment you acknowledge the venom’s presence, its paralyzing effects have already begun to take their toll. As you fall from the tightrope, a rush of butterflies will soar from your stomach to the rest of your body; your arms become numb, your hands tremor, and your legs go weak. Your heart rate skyrockets, pounding at a distracting rhythm inside your constricted chest. The thoughts in your head become deafening. The calls from your teammate just ten feet away will sound like a distant murmur. Your breathing becomes irregular, your eyes widen, nervously darting from one place to the next. It is alarming to realize how much your body is at the mercy of your mind in this situation. Deep breath. ‘Stay in the present, this pitch is coming to you.’ I’d say to myself. Deep breath. It requires an enormous amount of mental strength to battle your mind and regain balance on the tightrope. Being in control of both your mind and your body is one tool every athlete who has played at a high level can relate to. Just like every physical aspect of the game, this skill comes from great coaching, practice, and experience. ---------- The first team meeting my freshman year was one of my favorites. The Alabama softball team had just come off a successful season where they had finished third in the WCWS. They had received quite a bit of screen time in which Bama legends like Brittany Rogers, Kelley Montalvo, Ashley Holcombe, and Charlotte Morgan truly shined in the spotlight. It started to sink in that I was teammates with them. Honestly, I was star-struck at that first meeting. I shied away in the corner in hope that no one would speak to me. However, as I know now, Alabama softball players are programmed to welcome the scared, quiet freshman hovered in the corner. In my feeble attempt to camouflage into the wall, I actually made myself the most obvious target. Everyone put in extra effort to try and make me feel welcomed. Each of the coaches said their piece at that meeting. I learned a lot from listening to them speak. Your first time doing anything you can either choose to be overwhelmed by the experience or you can choose to be a sponge that absorbs and retains as much as you can. In that meeting, it didn’t take long for us to get hit with advice that would change our lives. Coach Murphy looked at every single one of the incoming freshmen and said, “I’m going to tell the five of you what I tell every other freshman class when they first arrive on campus.” ‘Here it is.’ I excitedly thought to myself. The restricted file, the message that is going to be the key to unlocking any worry or uncertainty I have as a freshman. I was about to get slammed right in the face with the secret to success. Coach Murphy with a straight face said very calmly yet sternly, “The sooner you realize it is not all about you, the better off you’re going to be.” Think about that for a second. Picture being a freshman. You were one of the most highly recruited softball players in the nation. Whatever team you just came from, you were the best of the best. You were it. You were written about in the local paper, and your parents, family members, and friends all made a big deal about you going to the University of Alabama to play softball. Then the very first thing you hear is, guess what, this is not all about you.

Finished It unlocks the Alabama Softball story in a transparent and powerful way. Her stories are woven together creating the sensation you are living and learning what makes Alabama Softball special. This book shares how Coach Patrick Murphy, Coach Aly Habetz and staff have cornered the market on RELEVANT leadership. Unwavering values that withstand the test of time in an ever changing society. Her book pulls back the curtain on one of NCAA Softball’s greatest collegiate programs.

“Been around this amazing game for awhile, and few have ever taken us inside the true emotion, process, preparation and understanding of what it takes to win on the biggest stage. Cassie does this so uniquely, you will find yourself applying to your own life the creative ways this special group was able to succeed both as an underdog in THE championship moment and as a difference maker in life.”

Finished It shows us there is more to winning a national championship than meets the eye the day that trophy is hoisted. Discovering the details of raw emotion and effort that goes into winning a national championship is nothing short of motivational. You can see the Alabama Softball program has developed a formula for not only winning games, but the effort it takes to develop a healthy, inspiring lockerroom from day one of a season. Any athlete, any person would be able to relate to the dedication, creativity, passion and belief in each other this team had from the get-go of their magical season.

“Although little can prepare you for adversity, this book will show you that when you have twenty hearts beating as one, nothing can stop you.”

Cassie Reilly-Boccia was a four-year starter on the Crimson Tide softball team, leading the team to several titles, including a National Championship in 2012. She was inducted to the New York State Softball Hall of Fame as a member of the class of 2015. She’s a certified strength and conditioning specialist as well as a USA Weightlifting Sports Performance coach. She’s also the director of research and development and intern curriculum at Athletes Warehouse in Pleasantville, New York.