Life from the Press Box 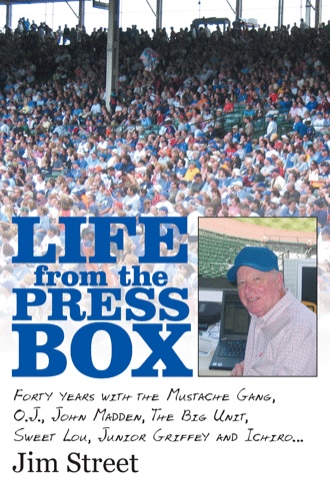 … As the Mariners traveled to Boston the following day, April 28, the Red Sox were finishing up a series against the Rangers in Arlington, Texas, that night. Clemens was scheduled to pitch for the Red Sox. The game was rained out, pushing his start back a day—to April 29 against the Mariners at Fenway Park.

Clemens struck out the first three batters he faced, fanned two more in the second and another in the third. I watched major-league history being made. The Mariners struck out twenty times. Every starter struck out at least once. Bradley struck out four times.

The Mariners actually led the game, 1–0, on Gorman Thomas’s sixth-inning home run. Moore, though, surrendered three runs in the bottom of the inning, and Seattle lost, 3–1.

That was the beginning of the end for Cottier ...

“… Jim Street’s book is a fascinating look into a distinguished career, taking the reader behind the scenes in the world of Major League Baseball, the National Football League, and the newspaper business. You’ll learn a lot about some prominent sports figures you thought you already knew, and come away with a new appreciation for the folks who spend a living chronicling fun and games.”

Jim Street learned early in his career that fairness and accuracy were two of the most important words of his profession. From the beginning to the end of his forty-year career as a sportswriter covering major league baseball and professional football on the West Coast, Street strived to listen to both sides of each story and print the truth.

Street chronicles his intriguing sportswriting career beginning in high school when he discovered his passion for writing while covering beats for the local newspaper, the Butte Valley Star. As he moves through his career, Street details his experiences working alongside iconic athletes and coaches that included O.J. Simpson, Randy Johnson, Joe Montana, Bill Walsh, John Madden, and Ichiro Suzuki while sharing fascinating insight into what it was like to cover the Oakland Athletics’ famed Mustache Gang in 1972 featuring future Hall of Fame legends Catfish Hunter, Reggie Jackson, and Rollie Fingers, several World Series and All-Star games, the first World Baseball Classic, two Super Bowls, four Rose Bowls, the Kentucky Derby, and the men’s and women’s US Open golf tournaments.

Life from the Press Box shares memories from the forty-year career of a former MLB.com beat reporter and long-time baseball writer who played a significant role during a bygone era.