The Holocaust, the Church, and the Law of Unintended Consequences 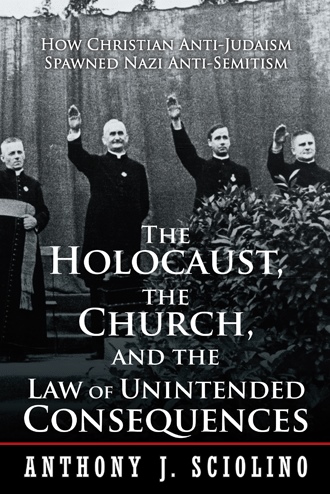 “As the Reich subsidized church functions in Nazi Germany, priests were subject not only to their diocesan bishop’s authority, but, as civil servants, were subject to Reich authority as well.  Accordingly when it was ordered in July 1933 that all civil servants were required to offer the Seig Heil (“Heil Hitler”) salute, priests and bishops were also required to comply.  It should be noted that anti-Judaism, the clergy loyalty oath, the Reich Concordat and the Vatican’s policy of neutrality during WWII, coupled with their own feelings of nationalism/patriotism and fear of Bolshevism, constrained church leaders from speaking out against evil in the Third Reich — an unintended consequence.”

“… Cloaking himself and his regime with religiosity, Hitler’s insidiously effective propaganda machine was able to tap effortlessly into the poisonous groundwater of anti-Judaism, based on religion, and easily blend into Nazi anti-Semitism, based on race.  When Nazi racist ideology defined the Jew as a demonic “other,” it was building on an aspect of the European psyche firmly in place for close to two millennia.   In short, Nazi anti-Semitism had two parents — neo-pagan anti-Semitism and Christian anti-Judaism.  The Holy See acknowledged the first parent, but not the second.”

“Sadly, however, because Jews were deemed to be outside the circle of Christian concern, too many Christians wrongly perceived that the Gospel of Love excluded Jews.  That was a blasphemous concept because no one is outside God’s circle of love… And the test of our humanity is how we treat the weakest and neediest among us … Clearly, something went terribly wrong for Christianity during the Holocaust, for what was practiced by most of the faithful was certainly not what Jesus preached.  And what resulted from the obvious disconnect between belief and practice was the worst human catastrophe in history. “

“I admire greatly the way in which Deacon Sciolino has been able to absorb a vast amount of material and weave it into a coherent account of the R. C. Church vis-à-vis the Holocaust. … Telling the story ‘from the inside’ has an especial relevance and importance.” —Rev. Hubert G. Locke, cofounder of the Annual Scholars’ Conference on the Holocaust and the Churches The image of Jews as “God-killers” and their refusal to convert to Christianity has fueled a long tradition of Christian intolerance, hatred, and violence. It is no surprise, then, that when Adolf Hitler advocated the elimination of Jews, he found willing allies within the Catholic Church and Christianity itself. In this study, author Anthony J. Sciolino, himself a Catholic, cuts into the heart of why the Catholic Church and Christianity as a whole failed to stop the Holocaust. He demonstrates that Nazism’s racial anti-Semitism was rooted in Christian anti-Judaism. While tens of thousands of Christians risked their lives to save Jews, many more—including some members of the hierarchy—aided Hitler’s campaign with their silence or their participation. Sciolino’s solid research and comprehensive interpretation provide a cogent and powerful analysis of Christian doctrine and church history to help answer the question of what went wrong. He suggests that Christian tradition and teaching systematically excluded Jews from “the circle of Christian concern” and thus led to the tragedy of the Holocaust. From the origins of anti-Judaism and anti-Semitism and the controversial position of Pope Pius XII to the Catholic Church’s current endeavors to hold itself accountable for their role, The Holocaust, the Church, and the Law of Unintended Consequences offers a vital examination of one of history’s most disturbing issues. theholocaustandchurch.com

Anthony J. Sciolino is a retired New York State Family Court judge and a graduate of Columbia University and Cornell Law School. He holds a master’s degree in theology from St. Bernard’s School of Theology and Ministry and is an ordained Roman Catholic permanent deacon. Sciolino and his wife, Gloria, live in the Rochester suburb of Pittsford, New York. They are the parents of an adult daughter, Kate.