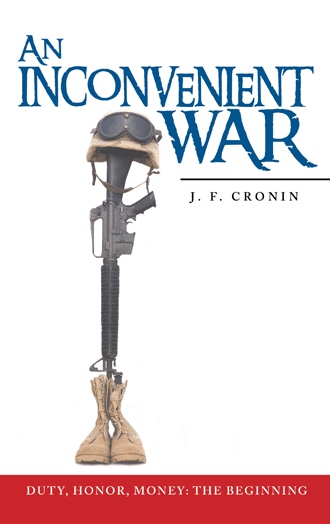 There have always been people who envisioned an American Empire ala Pax Romana. With the end of the cold war they saw their opportunity. As the sole world power they set out to create a new world order in which American would be the de facto ruler. Needing a client state, from which to launch their plans, they settled on Iraq. Their decision was easy. Iraq sat on the world's second largest oil reserves. Everything was in place to move against Iraq when 9/11 changed everything. America had to go to war in Afghanistan.It was An Inconvenient War because it disrupted the timing of those wishing to reorganize the world. Those in power in Washington didn't use the assets required to win in Afghanistan and put the burden on the troops to put out fires. General Jake Gregg, USMC is thrust into the action with little support and plenty of hinderances. Becoming the lightening rod between the politicians in Washington and the troops on the ground, he has to make impossible choices, choices that no field commander should be forced to make.

Lieutenant Colonel Jake Gregg is a marine recruiter’s dream: handsome, well-respected, and on the fast track to making general. As an on-ground commander during the Gulf War, Colonel Jake led his troops into multifaceted battles, minimized dangers for his marines, and squashed all attempts to reward his outstanding leadership with a medal. But as the war ends and several years pass, the neoconservatives are not happy. They want the regime of Iraq overthrown.

It is 2000 when Jake, who is known for fighting his superiors as much as the enemy, is relieved of his duties as director of operations for the Joint Chiefs of Staff. As he begins his new role as general at Quantico, he assigns Major Fran Matthews, who knows all too well about the negative effects of being a woman in the military, to create a security plan for the Capitol area base. But when America is suddenly attacked on 9/11, everything changes for the neocons, Jake, and Fran as a new war begins in Afghanistan.

An Inconvenient War is the tale of a seasoned military commander who embarks on a journey to not only fight in wars but also to battle Washington leaders who are determined to achieve their goals—even if others must pay for their choices in blood.

J. F. Cronin is a retired USMC major general who has written essays, articles, commentaries, and Op-Eds in the political-military genre. He attended top military schools and earned a master’s degree in international relations. J. F. currently lives in a fishing village on the Oregon Coast. This is his fifth novel and the second book in a trilogy.