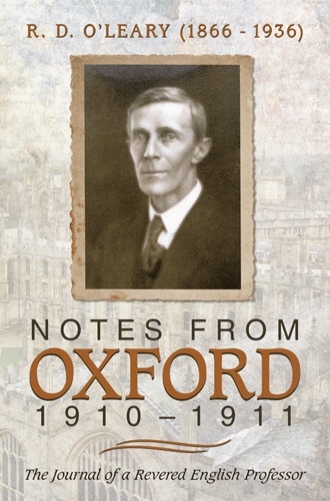 Over the span of forty years, Professor Raphael Dorman O’Leary passionately imparted to his students his love of writing and English literature at the University of Kansas. When he died after a short illness in 1936, his personal effects were passed to several relatives until Dennis O’Leary, and his wife, Margaret, discovered his papers while restoring a family house. Amid Professor O’Leary’s papers were two slim and battered booklets containing the colorful journal that he kept during his sabbatical in Oxford, England, from 1910 to 1911.
The journal paints a vibrant picture of O’Leary’s academic, social, political, and religious encounters in Oxford, England, as he and his family attempted to adjust to an alien world. Professor O’Leary portrays with humor and pathos his myriad encounters with professors, politicians, Rhodes scholars, shopkeepers, nurses, street urchins, and mummers while vividly describing the dreary climate, tea and dinner parties, football games, the marketplace, musty bookstores, Oxford’s slums, and the birth of his son in a rooming house bedroom.
Notes from Oxford, 1910–1911 reveals a fascinating glimpse into the experiences of a revered English professor during his one-year sabbatical in Oxford, England.