A Baseball Career That Ended In . . . A Split Second

The Life and Faith of Jim Aldredge 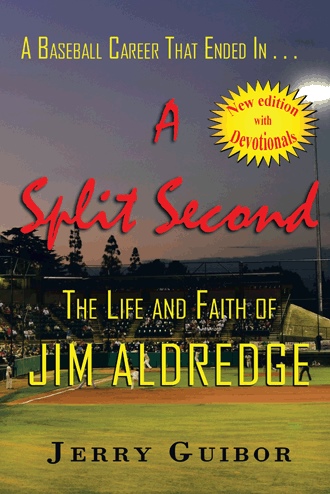 When Jim Aldredge came out of the clubhouse to warm up that night, the Lincoln Chiefs were opening a home stand against the Amarillo Gold Sox. They had just returned home from a two-week road trip to Topeka and Albuquerque.

Now, it was time to play catch and only natural that he sought out Tony Washington, one of his roommates in spring training.

“Don’t know who he is,” Washington replied. “All I know is he’s a right-hander.”

“Well, that means I’m hitting third, and you’re right behind me, hitting fourth.”

Aldredge batted third when facing a right-hander, and Washington, a left-handed batter, fourth. Manager Monty Basgall flip-flopped the two in the batting order when a left-hander was pitching. It was his best attempt at making his lineup more productive.

“Know what he throws?” Aldredge asked.

“Don’t know that either. But I know you can hit him.”

It was encouraging news because Aldredge had gotten off to a slow start. It was too early in the season to call it a slump, but he was hitting a disappointing .245 in 28 games for the Chiefs of the Class A Western League.

In his rookie season with the San Jose JoSox, he batted .284 and led the California League in triples with 15, hitting with power mostly to right-centerfield. Impressive, but not everything the Pirate organization expected out of a player 6 feet tall and 195 pounds, and strong. The Pirates wanted him to pull the ball and generate more home runs. As a result, he was topping the ball to the left side of the infield.

Aldredge had begun his second season of professional baseball in Lincoln, so he was familiar with the ballpark because the team already had played two home series before embarking on that road trip. But a mental review of the friendly confines of Sherman Field seemed like a good idea. Little did he know it was the last time he would see the place as a player.

The grass had been mown earlier that day and was the limpid green of a pristine spring, and Aldredge took in the fragrance and basked in the moment.

Home plate was in the northwest corner, and the sun was starting to slip below the rim of the wooden roof covering the grandstand, and he wouldn’t be looking directly into it by game time. The lights hadn’t yet taken hold, or had they? After all, it was a Class A minor league park, and the lights were just adequate.

The ballpark was a wooden structure, rustic looking, and the wood fences were strangely void of any advertising for that era. The proprietors of Armstrong Furniture and Allen’s-Alley, which called itself “the fishing headquarters for South Lincoln,” chose to advertise only in the game program, which cost 10 cents and included a smiling photo of manager Basgall.

The layout was symmetrical, 345 feet down each foul line and 405 feet to straight-away center field. The dugouts were just that – dug out and a dirt floor, and players had to walk down narrow, cramped steps. In the clubhouse, players hung their street clothes on hooks. There were no lockers. The shower room gave the whole place the smell of a musty gymnasium.

Aldredge noticed a slight breeze wafting from left field across to right, carrying the aromas of cigar smoke and popcorn to the far reaches of the park. But it wasn’t strong enough to drastically alter the flight of a fly ball, and certainly not when Dick Stuart hit 66 smoking home runs two seasons earlier.

Sherman Field held a few thousand fans but, more than likely, there were fewer than 1,000 present that night. The team’s average attendance that season was 463 friendly Nebraskans. It’s impossible to say whether they knew there was a young phenom named Aldredge in their midst. They hadn’t seen him play for Edison High School in Fresno or seen his dazzling performance in a Southern California Winter League game just before he signed.

Jim Aldredge was a phenomenal baseball player and signed a professional contract at age 17. In his second season, he was hit in the left eye by a thrown ball. He eventually lost sight in the eye, but he attempted two comebacks and was playing very well -- better than most players with two good eyes. But the politics of baseball and racism made him realize it was time to return to Fresno and get an education. He already had enrolled at Fresno City College and was graduated with an Associate of Arts degree. He continued at Fresno State where he received bachelor’s and master's degrees while working full time for the City of Fresno. He earned a Ph.D. from Golden Gate University and also studied at Oxford. At nights, he taught at Fresno City College, the University of San Francisco and eventually became a full professor at Fresno State -- all the while he was working full time as an assistant city manager. He was made interim city manager a few times when mayors and administrations would change, but an outsider always got the job. Then, at last, the city came to realize they had the right man all along. He left the city when changes were on the horizon and taught at Fresno State until he retired in 2008. He was named a professor emeritus. He then created a foundation to help aspiring students and athletes, and sports programs.

Jerry Guibor is a retired sportswriter and editor who has written three previous books: A Candle Burned, From Nyet to Da and The Original Edison Field. He also has edited and designed They Put Me in Charge . . . And Told Me I Didn’t Have a Clue, a personal and business perspective by Leif Bilen, and is editing two forthcoming manuscripts, a memoir by career missionary Rob Farnsley (the title is “When a Christian Has Same-Sex Attraction/My View From the Deck”) and Pledging Allegiance, another memoir by Leif Bilen. Each of these works is based in the Christian faith. Jerry has worked as a volunteer missionary with three different mission agencies in Russia and Ukraine for 21 years. He lived in Rostov-on-Don, Russia, in 1994-95, again in 2003, and in Kiev, Ukraine, in 2004-05. He has worked with Christian public school teachers in Ukraine each year since 2006 and continues to visit many of them twice a year. He lives in Fresno, California.