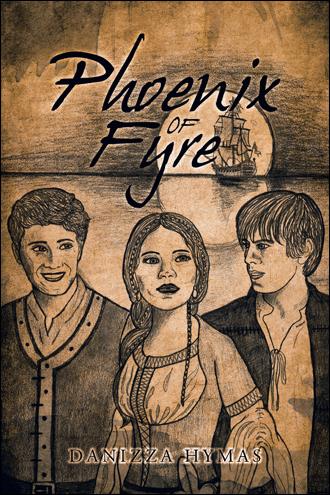 No longer able to suppress the urge to deck Burgess, Ayden flipped out of his hammock and took a swing at the big man, striking his jaw. Ayden immediately regretted the loss of his temper, for the soldiers descended upon him. They seized him so Burgess could take a few retaliatory hits, after which Burgess ordered him taken above deck. “Tie him to the mizzen mast. Annie’s itchin’ to teach this runt a lesson,” Burgess said. Captain Steele sat at his evening meal al fresco, accompanied by Princess Parissa and her ladies. They jolted when a frenzied mob carried Ayden above deck. Phoenix jumped to her feet. “What’s going on?” “Your incorrigible brother started a fight below,” Burgess growled, wiping a bloody lip. Captain Steele nodded for Burgess to proceed with the disciplinary action. Ayden’s arms were stretched around the circumference of the mast and tied. His jacket was tossed aside, nothing but a thin shirt protecting Ayden’s skin. An evil joy engrossed Burgess’ face as he grasped the cat-o’-nine tails. The soldiers urged Burgess on, and he pumped his fist in the air. “I’m certain we can come to some sort of arrangement. Allow the opportunity to make amends,” Phoenix suggested to the Captain. She clung to the rail of the upper deck, helplessly watching as Burgess prepared to strike. Parissa, Monique, and Lorelia clustered beside her. Steele joined the women at the rail and signaled Burgess to deal out the lashing. “Stop!” Parissa shouted, but her commands held no weight, and Burgess let his whip fly. From where Phoenix stood, she observed Ayden’s agonized face. She could stop this torture with the use of her magic. She could form a fiery barricade, or command the whip itself, but the expression in Ayden’s eyes told Phoenix he assumed what she was thinking, and she needn’t take such a risk exposing herself on his account. With each lash, Ayden’s tight jaw and gritted teeth contended Phoenix stand down and accept his sacrifice. “Stop!” Phoenix screamed, but Burgess continued exercising his authority. Ayden grimaced and flinched with each stroke, but he wouldn’t grant Captain Steele the satisfaction of an outburst. Monique shuddered with each snap of the whip. “You’re killing him! End the abuse and listen to me for one second,” Phoenix pleaded. “I can’t let your brother’s behavior go unpunished. That would demonstrate weakness. I’d lose control of the men,” Steele replied calmly. “Burgess demands recompense. I’ll foray Ayden’s flesh or one of yours. It’s your decision.”

Magic. Mystery. Adventure. A war waged centuries ago is reborn as an evil sorcerer from Taurent attempts to seize control of the three Ivory Kingdoms. Magic that has not been seen in 500 years returns to Cicero in the form of a young girl named Phoenix. Daughter of a blacksmith, she is taught to sword fight; a talent she ends up utilizing for survival and success. During an attack on her village, she loses her family, but she finds that she possesses a unique skill set that grants her certain mystical abilities, particularly over the elements. Raised by gypsies, she befriends a mute named Monique. Together, they embark on a journey that leads them to meet Ayden, an archer. He assists them in the realization of Phoenix's destiny as the Lady Fyre, who is prophesied to be the only being powerful to defeat the sorcerer Daedalus. The trio fights to take back Cicero, as well as their very lives. The island nation of Isys also has a unique interest in Phoenix. They send a spy to seek her out, which results in an unlikely alliance, as well as an unexpected reunion. Will Phoenix and her entourage be able to defeat Daedalus and his Taurentian army?

Danizza Hymas has a BA in Communications from BYU-Idaho. She enjoys soccer, volleyball, sewing, writing, and action/adventure flicks. She and her husband, Tim, live in Rexburg, Idaho with their nine children and three dogs.