A Prescription for Healing Our Broken System of Government 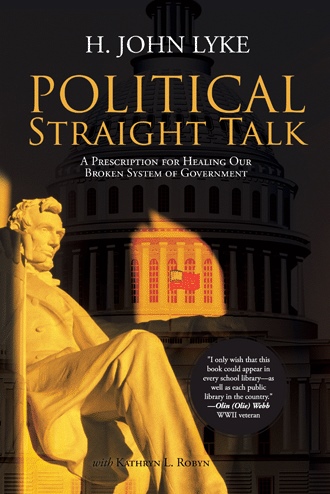 The Stark Reality Is This …

Our government is broken and dysfunctional. Its laws and judicial decisions have contributed to a huge income gap between rich and middle income, to say nothing of the poor. Congress cannot come to agreement on any issue that is causing suffering in our country or the world. There seems to be a double standard in the way laws are enforced across the board—the old “steal a little and you go to jail, steal a lot and they make you king” has been codified into both law and culture: Punishments are meted out in opposite fashion depending on whether the lawbreaker is white or black. Prisons are fast becoming privatized profit machines filled with people of color convicted of drug crimes, when we know that white people use (and deal) drugs to a much greater degree than do people of color, but they rarely get punished for it. And the very idea that government is here to serve the needs of the people, to address the problems all of society faces, to come up with solutions that make it better for everyone, and that a conflict of needs among the people requires a compromised solution that doesn’t leave anyone in a world of hurt does not even seem to be on anyone’s mind anymore.

The even starker reality is that if we don’t rectify the causes of our government’s broken and dysfunctional state, and if our twenty-first-century political leaders continue to present a caricature of leadership, debating the issues with childish arguments, and only being interested in zinging the opposition with deceitful one-liners, by the end of this century, if not before, the United States will join the historical list of fallen empires. What will stand in its place? Exxon-Mobil? Koch Industries? Monsanto? If it’s some multinational board of directors, they will not be elected by you and me, that’s for sure.

Our politicians, in particular, need to understand why they must abandon their narcissistic and selfish interests in favor of being other-centered. After all, they are our public servants and they are supposed to serve. Then, with love of country—and the planet on which it sits—in their hearts, they can begin to respond to our individual and national needs more congruently with the philosophy written in the Declaration of Independence and the Constitution. This point must be made again and never forgotten, because therein is written the formula for the kinds of freedom and responsibilities that this democratic republic is supposed to guarantee to us and require of us—private citizens and public servants, alike. Only then does the whole become greater than the sum of its parts, which is what our name, the United States of America, is supposed to reflect. Well, it’s all about maturing, isn’t it.

If we do not mature, like all living organisms, we will die young as a nation. The collapse of our democracy and our republic will occur. Something else will take its place, but it will not be anything our Founding Fathers envisioned as colonists, fought a revolutionary war to defend and protect, and finally put down on paper, signed, and ratified state by state.

It is because of this danger that you, me, and our fellow Americans need to act now. If we don’t respond to this urgent clarion call, a quickening of the ongoing erosion of our stated principles and moral doctrines—as expressed through our freedoms—will be furthered instead.

The threats to our system of government are real and, specifically, come from within. If the erosion of our democracy continues unabated, where the wealthy continue to get richer, the poor continue to live more miserably, and the middle class falls further and further behind a comfortable standard of living, ultimately something will have to give. Such a state of disequilibrium cannot stay that way indefinitely, particularly if these conditions continue to worsen. When the boiling point, the critical mass of discontent, is reached, all it would take would be a charismatic leader with a lot of fear and marketing prowess on his side to light the metaphoric match, and bang—let the revolution begin! Or perhaps worse, we won’t even notice when the president has become a spokesmodel and Congress a clearinghouse for consumer complaints, while the CEO and board of directors that run everything around the world, through means both militaristic and marketing, are unknown to us. Perhaps that has already occurred. But let’s just say, for the sake of our humanity, that we still have a chance to pull back from the brink.

We must remember that the founding of our country was based on the motto E Pluribus Unum, “out of many, one.” This motto was proposed for the Great Seal of the United States by John Adams, Benjamin Franklin, and Thomas Jefferson in 1776. This Latin phrase offered a strong statement of America’s determination to form a single nation from a collection of states.

In recent years, its meaning has come to suggest that out of many peoples, races, religions, languages, and ancestries has emerged the single people and nation that represents the concept of the melting pot as it applies to our beloved country the United States of America.

I emphasize United so you don’t miss it. I don’t want it to be overlooked, although it is hardly how we view the “red” and “blue” states that make up—shall I say white?—America today. In other words, we have created these false divisions that keep us apart, not attending even a little bit to the realities of our multicolored skins or perspectives, as would be suggested by our mantra E Pluribus Unum. The reason our United States of America are anything but united is because they are at continual loggerheads with one another rather than putting our heads together for the good of all. The thought of the two political parties cooperating is the furthest thing in the politicians’ political minds; consequently, their wish to accommodate one another in a way to further respond to the needs of all Americans is not even under consideration. I mention all of this to emphasize that if our system of government is destroyed, the destruction will come from within and the “symptoms,” not the cause of such demise will be economic ruination.

Let us remember, our current system of capitalism had yet to be adopted as an economic system when the country was formed. But financial or economic inequality has put a strain on our democracy over time, pulled from the brink more than once over unfair practices of the owner class: during the Industrial Revolution period of the “robber barons” and during the Great Depression. An argument might also be made that the Civil War was fought over unfair inequality of labor and wealth—what is more unfair than slavery and the ownership of human beings? Strong leaders in each of these cases have been necessary in order to pull us back from the brink or what could have precipitated the demise of our democracy and our republic. Abraham Lincoln, Teddy Roosevelt, and Franklin Roosevelt come to mind. The reason for the disparity of income between the three social classes in the past are instructive for us today: those who were wealthy controlled our nation’s purse strings and, over the years, from one generation to the next, did not observe the democratic principles of being fair and equitable in the right to self-determination of and the disbursement of monies to those who were being paid for the fruits of their labor.

In writing the Declaration of Independence and the Constitution, our Founding Fathers established a democratic republic with a solid political basis. What they wrote was the political map that future representatives would need to follow to conduct the people's business in an efficient and effective manner. As long as they faithfully carried out the people's will, our democracy and republic would function in a way congruent with our forebears' wishes.

What in the world happened?

H. John Lyke, a board-certified psychologist and professor emeritus at Metropolitan State College of Denver, and the author of multiple political psychology books, suggests that ever since George Washington retired as captain of our ship of state, subsequent presidents and members of Congress have failed to use the sailing chart of the Constitution. Instead, they've chosen to pursue their own and their political parties' self-interests.

Lyke uses psychological principles to explore the reasons why our government has fallen so low, and in the voice of a kind but determined therapist, he offers simple and viable solutions to get us back to following our map.

Dr. Lyke earned his master's degree in clinical psychology at Temple University in Philadelphia and his doctorate at Michigan State University. He is a board-certified psychologist and professor emeritus at Metropolitan State College of Denver, and was a clinical psychologist for the State of Colorado for many years. He has written the political psychology books The Impotent Giant and What Would Our Founding Fathers Say: How Our Leaders Have Lost Their Way, and co-authored a psychology self-help book, Walking on Air without Stumbling. He lives in Denver and has three grown children and four grandchildren. To find out more, please visit lykeablebooks4u. com, where you can read more about him as well as follow his current and archived blog posts.

More important to John, however, is that you join the discussion at lykeablebooks.wordpress.com, where the blog originates and you can post your comments.