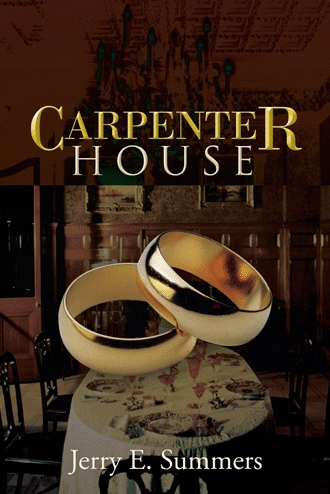 To My Successor Keepers I am Jebidiah James Carpenter II and I became the Keeper upon the death of my father, Jeremiah Caleb Carpenter, Jr., on September 11, 2001. I thank God for favoring me with the honor of being the seventh Keeper and for being a member of the Carpenter Family. Like at least two of our ancestors my father was referred to by a nickname, Jake, within the family and among his closest friends. It always impressed me that so casual a name could be spoken with so much respect when someone addressed him. Like his father before him my father chose to focus his life on his family and the family business, and in each endeavor I would judge him as most successful. He did not pursue politics, as did his father, and for that I am grateful because of the demands that such positions bring on the family of the politician, as explained to me by my father. My mother, Elizabeth Ann West Carpenter, was, to quote my Aunt Carol Sue, the salt of the earth. She was a kind and respectful person and such a positive influence on my sister and me. She loved and respected my father and he loved and respected her. My father and my mother were taken from life prematurely at the hands of terrorists and I can say with unquestioned certainty that my life’s endeavors, whatever they are, will be influenced greatly by that sad experience. Neither of my predecessors has mentioned Carpenter House in what I have come to call the Successor Letters. Please know that it is more that a building and it is more than a residence, it is an icon of the family and its heritage. Honor it and take care of it, and honor the family legacy because it is so worthy of a long tradition. Jebidiah James Carpenter II December 20, 2002 West Point, New York

The letter arrived shortly after the death of Jebidiah James Carpenter II’s parents in the 9/11 terrorist attacks. Penned by Jeb’s father in 1999, the letter reveals the existence of the Carpenter Family Secret Resolution and the existence of hidden wealth in the Carpenter home in North Carolina. Enrolled in the military academy, Jeb has just become the seventh Keeper of the family.

That legacy began in 1825 when Jebidiah James Carpenter, JJ to his friends and family, conceived the Carpenter Family Secret Resolution. He was a respected US Army officer, a Confederate officer, and a successful businessman. The resolution set a specific course for his descendants and was designed to protect the family’s heritage and its wealth.

The Carpenter family wealth allows Jeb to serve his country through his involvement with the CIA and military intelligence, protecting the American way, though at considerable risk to himself and more than average risk to his loved ones.

Providing a snapshot of a dark time in the nation’s history, Carpenter House presents a fictional story of love, espionage, and one family’s remarkable legacy.

Jerry E. Summers earned a bachelor’s degree in business from Lenoir Rhyne University. Retired, he and his wife, Jean, have two sons, two grandsons, and two granddaughters. They live on the North Carolina coast in Wilmington. This is Summers’s debut novel, and it reflects his interests in history, current events, and personal relationships.