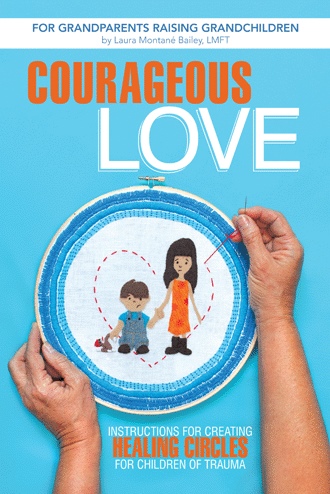 As she held the sleeping child in her arms, she was at once overwhelmed by feelings of deep love and by a fear that spoke in a loud voice, “Love will never be enough to fix all that’s gone wrong here.” Even after three and a half months of devoted care, her grandchild’s night terrors were not subsiding. Angelina was exhausted and filled with the knowing sense that it was going to take more to raise Samantha than she had ever imagined.
She had been disappointed when her middle daughter married Steven. Something about him just didn’t seem right. From three states away she had known there were problems, but she had no inkling how bad those problems were until the morning three and a half months ago when she got the call.

“Hello, is this Angelina Rivera?” a strong male voice questioned.

“This is Dan Redding, with the Sherriff’s Department in Tampa, Florida. There was a criminal incident last night involving your daughter, Caroline and her husband. We have them in custody and we are looking for family who can take their daughter. Caroline asked us to call you.” His voice trailed off as Angelina’s world crashed around her.

Everything that had happened since then was too complicated and heartbreaking to think about and there was nothing she could do about it anyway. Her heart ached for her daughter, but with her arms wrapped around three-year-old Samantha she knew in her heart that she had to do something for her. The child continued to whimper a bit as slumber settled in, and Angelina committed herself to finding answers for all the problems she was dealing with now. Samantha’s night terrors were just part of it.

Samantha screamed when she left her at daycare and that tore at Angelina’s heart every day. She had taken two weeks off when she first got her but could not quit her job. She needed the money now more than ever. She was tempted to take second shifts to cover the extra expenses, but turned them down because she knew she had to be with Samantha as much as possible. The child clung to her and followed her all over the house. She wouldn’t stay in her bed at night and woke up with night terrors regularly. She was pulling chunks of hair out of her head, and already had a large bald spot around the crown on the back of her head. She sucked her thumb and reverted back to wetting her pants. When disciplined she would refuse to comply and other times she would sob without any apparent reason.

Angelina was exhausted, but her love for this lost little child got her up every morning to start the next day with just as much energy as she had the day before. She had to save her granddaughter, if it was the last thing she did. Samantha might just be all that was left of Caroline, who was going to be tried as an accomplice to a murder, apparently drug related. It seems that Steven was a meth dealer and Caroline had taken up with him and all the chaos and destruction that lifestyle brought. Poor little Samantha had been subjected to a life not at all suited to growing up and developing properly.

Raising her own three kids had been instinctual, nothing more than the regular challenges of weaning, potty training, making sure homework was done, and curfew kept. Getting them all off to college had brought both a sense of accomplishment and a serious case of the empty nest syndrome. But Angelina had focused on her work and recovered sufficiently from an unexpected divorce to enjoy life again. Sitting in the same old rocker she used when her kids were little, she couldn’t help looking back over the years for a bit. What went wrong? Everything seemed good enough. Why would Caroline, having come from a good family, get involved in such a lifestyle? How could she neglect and abuse her own child? Now Angelina began to doubt her own parenting skills. If she couldn’t raise Caroline right, even in good circumstances, how in the world was she going to raise Samantha who had been through so much. Would she be able to make a difference or was it already too late?

Many grandparents who are raising their grandchildren begin to have doubts as they experience difficulties with their grandchildren that they never encountered when they raised their own children. How will this all turn out? Will I cut my own life short from the stress of it for nothing? Is there any hope for my troubled grandchild? These are good questions and thanks to scientists, researchers and other people who devote themselves to finding real solutions for what ails the human condition, we now have answers to many questions, questions people did not even know to ask fifty years ago. And we have the reassuring truth that although it “takes a village,” if a child has even one person in their life who truly loves them, it can make all the difference in the world. They just need that one ray of hope and the picture imprinted in their minds of what being loved feels like.

“Now that I know about the trauma of being separated from my birth mother at 43 days old, the fights between my parents, abuse and abandonment from my dad, I realize that I would have had to be an incredibly distraught baby in the middle of a storm. I have always thought of my grandma as an angel that saved me from all that trauma and strengthened me, gave me resiliency to get through it all. I think that to a certain extent I was also what allowed her to finally be a mother – fully a mother, not just a mother that was DOING EVERYTHING, (widow with 9 children) but now being able to be the mother that was just nurturing for the first time – just being a mom. In some way I think it was healing to both of us.” ~ A grandchild

Erik Erikson was the first child psychoanalyst in the city of Boston, where he fled from Germany during the Holocaust years. He taught for many years at the Harvard Medical School and for the Institute of Child Welfare at the University of California at Berkeley. He worked with and studied children and youth in many cultures and areas of the United States, and through his research established what is still recognized as the most complete theory of life stage development. In 1969 Erikson received the Pulitzer Prize for his book Ghandi’s Truth. His last book, published in 1986 just eight years before his death at age 92, was Vital Involvement in Old Age. This book discusses the final stages of life beyond childhood and adolescence to help people discover how, in looking back, they can accomplish the stages that remain incomplete and end their lives with integrity rather than despair. As a grandparent raising grandchildren, you now have the opportunity to examine your own life as you consider how best to help these children in your care, pulling you both into a healthier, happier, more fulfilling future.

I fondly remember my own grandmother, the way she rocked me and sang off key when I was a little girl. Yes, she was old (when you are four years old, fifty-seven seems really old), heavy set and a little wrinkled. But I thought she was beautiful and I loved hearing her sing. I always begged for one more song, and one more story about when she was a little girl.

Raising grandchildren can be challenging for many reasons. Often, the children have experienced complicated family dynamics, heartbreaking loss, abuse, and neglect – all of which may affect their emotions, behavior, and development.

In Courageous Love, author Laura Montané Bailey draws on both professional and personal experience to offer grandparents the hero status they deserve and the encouragement they need, to continue to fight for the lives of the grandchildren they love. This book explores the devastating impact of trauma to brain development and function, and provides instructions for helping grandchildren to experience Post Traumatic Growth rather than Post Traumatic Stress Disorder. Bailey presents the idea of the Healing Circles to provide what traumatized children need most:

These Healing Circles provide a protective structure that becomes the container for joy, empathy, and love, a powerful combination for delivering hope and healing to children of trauma.

Bailey discusses the three key responsibilities of raising grandchildren in a high tech, high stress, unpredictable world: take care of yourself, un-break the hearts of your grandchildren, and re-wire their brains for success. Presenting easy-to-understand solutions, Courageous Love gives grandparents the tools and confidence they need to run this parenting marathon.