by B. K. Parent & Cover design or artwork by Katherine M. Parent 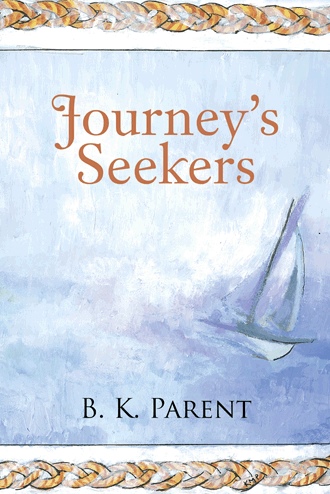 It must be almost time for me to stand watch, thought Chance, when he heard the ship’s bell ring seven bells. That made it a half hour before he was to report for duty. Chance decided it was too soon to get up out of his bed that was swaying slightly with the rolling of the ship. Soon this trip would be over, he thought. Then, thinking he might have miscounted the seven bells, he sat up abruptly, which sent him flipping out of the hammock, landing face down on the deck. It was then that the wrongness of where he was hit him almost as hard as he had just hit the floor. When Chance lifted his head off the grimy, littered floor, he saw he was in a very small room. Light was coming through the small barred window in the door.

This is wrong, so wrong, Chance thought, as he picked himself up off the floor and gave the tiny space a better look. He was obviously in a ship’s brig, but how had that happened? He could not remember being thrown into the brig. For that matter, the ship he had been crewing on did not even have a brig. When he looked out the small barred window, Chance realized he was in the hold of an unfamiliar ship. The faint light he could see by was filtering down through a grate in the hatch. How had he gotten here?

Chance had left home over a month ago, setting sail for the country of Sommerhjem, and unless it had been a dream, he had landed in the port of Marinel. He distinctly remembered slinging his sea bag over his shoulder, saying his farewells to the crew, and disembarking. He had headed away from the dock area, and then what? What had he done after he had left the ship? Chance remembered he had felt hungry and was looking forward to some fresh food. He had headed up the street away from the docks to find a place to eat.

What had happened next?

Yara froze when she heard folks enter the garden. She knew she should not be there in the first place. It was, after all, the royal librarian’s garden. Now mind you, the royal librarian had never said she could not be in her garden, Yara thought to herself, but then again, she had not said Yara could be there, either. Yara did not know what she should do. Step out of the bushy hedge she was hiding behind and give away her secret, or stay hidden?

Looking through the dense leaves of the hedge, Yara could see that three folk had entered the garden, but it was difficult to see just who they were. Cautiously, she moved a few branches aside to get a better view. Two of the three did not surprise her, for they were the head royal librarian, Eluta, and the woman who had been introduced as her sister, the Seeker Odette. The other one was a surprise, for he was the young man who had just brought the fifth piece of the oppgave ringe to the capital. Maybe not so much a surprise on second thought, considered Yara. He was a seeker, also. She was just about to move out of the hedge, so as not to eavesdrop, when she heard one of them mention the name Laron Karmoris. Her whole body stilled, and she listened in amazement to what both Seeker Chance and Seeker Odette had to say.

At the great summer fair in the capital city of Sommerhjem, the evil Regent is forced to step down due to the calling of the Gylden Sirklene challenge, leaving the future of the country hanging in the balance. One year to the day the challenge is called, all nine pieces of the oppgave ringe must be delivered to the capital. Four are already there, but five more need to be found.

Chance, a dreamer and adventure seeker, has been chosen by his family to return to Sommerhjem to retrieve a piece of the oppgave ringe his father hid before the family fled the country to escape certain demise. But what he thought would be a grand adventure turns out to be more than he bargained for; he is thrown into the brig on a smuggler’s ship, and that only marks the beginning of his troubles.

Meanwhile, Yara secures work in the royal library, where she secretly begins researching the whereabouts of a piece of the oppgave ringe her family was once charged with keeping safe. But what she eventually uncovers soon takes her and her fox companion, Toki, on a dangerous expedition to Sommerhjem’s border.

In this continuing fantasy, two seekers embark on separate journeys to find treasured objects and return them to their rightful place without any idea of where life is about to take each of them.

B. K. Parent is a retired school psychologist who splits her time between a home in Minnesota, where she is mayor of her city, and a cabin in Wisconsin that she shares with Celeste and two cats. Her first book, Journey’s Middle, won the 2012 Midwest Book Award for Young Adult Fiction. Her second book, Journey's Lost and Found was a finalist in two categories (Young Adult Fiction & Fiction: Fantasy/Sci Fi) in the 2013 Midwest Book Awards. She is currently working on the next book in the Sommerhjem Journeys series.