Dancing on the Inside 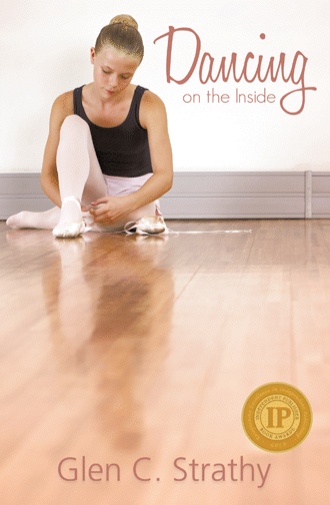 As she was getting ready for bed that night, Jenny bent down and picked up a pair of pyjamas that had fallen on the floor—without bending her knees. Straightening, she suddenly realized that, two months ago, she couldn’t have done that. She looked down at her legs, which had been firmed by hundreds of rélevés. She had changed in these past two months. And yet, she was just beginning. How much more was there to discover? How much further could she change if she had the chance?
There was something missing in her. A hole that dance promised to fill. It had called to her that first time she saw the DVD of Swan Lake, and it was calling even more strongly now.
Jenny decided that somehow she had to get back into that studio, and with her parents blessing next time. She didn’t know exactly how to do it. She just knew she would.

Ever since her grandparents gave her a DVD of Swan Lake, twelve-year-old Jenny Spark has wanted to be a ballet dancer. But on her first day of ballet class, she suffers a crippling panic attack. She’s too terrified to practice in front of the other kids, and as for actually performing for an audience? Forget it.

Yet Jenny refuses to give up her dream of making dance part of her life. With determination and a little deception, Jenny figures out how to observe ballet class without actually participating, and she practices in the safety of her home. Then Jenny meets her polar opposite: Ara Reyes, a bold, spontaneous, and accident-prone girl who longs for the spotlight but is overlooked in favor of the school’s star performer.

The girls’ friendship blossoms as they help each other find their real talents. Ara’s dancing takes a leap forward, and Jenny discovers she has a hidden gift for choreography. With the support of the school’s newest teacher, Jenny’s original ballet might just make it on stage … but will she?

Charming and inspiring, Dancing on the Inside shows how pursuing our passions can often lead to wonderful and unexpected results.

“Dancing on the Inside is a fine and very much recommended read for younger readers who may be facing stage fright themselves.”
—Midwest Book Review

Glen C. Strathy started writing stories when he was 11 years old and became enamored of the arts and the opportunities for self-expression they offer people of all ages and backgrounds. Coauthor of a New York Times Bestselling Business Book, he has also worked as an actor, teacher, and freelance writer. Dancing on the Inside marks his fiction debut.

Glen graduated from the Artist in Community Education program at Queen’s University, Kingston and earned his M.A. in English from the University of Western Ontario. His website www.how-towrite-a-book-now.com provides advice to budding authors.