Beautiful Land of the Sky 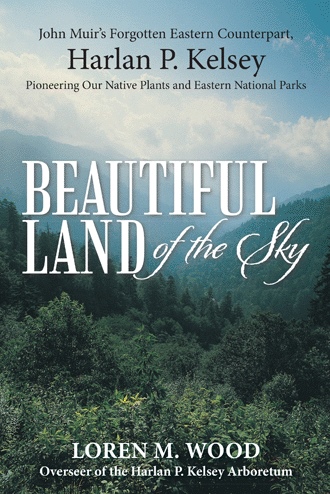 Our sub-title, John Muir’s Forgotten Counterpart, is purposely provocative. It suggests that Harlan P. Kelsey is in the same league with the supreme icon of western wilderness and preservation—John Muir.

This is the John Muir who helped father four National Parks, whose name adorns three mountains, a glacier, three trails, a section of a State Highway, a woods, a wilderness area, a beach, countless schools including a college, numerous buildings and parks, a National Historic Site, a U. S. Postage Stamp, the 2005 California State Quarter.

He was awarded three Honorary Doctoral Degrees—Cal/Yale/Harvard. Even this impressive list is incomplete, but you get the idea. Muir's name and at least some of his accomplishments as the preservation hero of the West are widely acclaimed.

In contrast, Harlan P. Kelsey is an obscure forgotten figure. Ask anyone, "Who is the preservation hero of the East?"One person in ten-thousand might give you a name and would probably be wrong. We contend it is Kelsey, and have the evidence to demonstrate it.

Kelsey’s preeminence as a horticulturalist made him a natural leader in the push for National Parks east of the Mississippi. This pioneering work spanned thirty years, during which he served as both a Commissioner and Collaborator, under four different Directors of the National Park Service.

Consider Secretary of the Interior Wilbur's words to Kelsey in January of 1932:

Director Albright of the National Park Service has told me of your work … over a period of years in connection with the establishment of the eastern national parks … carrying with it the realization of the importance of saving, while they still could be saved, such great primitive areas as the Everglades, the Great Smokies, Isle Royale, and the like. … None of these projects, I am confident, would have come to their present satisfying status had you not stepped in at critical moments and cheerfully given of the best that was in you. The fact that we could rely on your ripe experience, judgment and enthusiastic interest at such critical points has contributed more to their success than you probably will realize, and for this I want to give you my most cordial thanks.

A half century ago he was nationally acclaimed by a veritable avalanche of the preeminent horticultural and conservation associations in America. They extolled, "Horticulture and all related fields will forever be indebted to him for his contributions to their advancement."

Kelsey was the trailblazer and for a half century the leader in pioneering native plants for the American landscape. The aristocrats of today's gardens are the plants he promoted from the high southern Appalachian Mountains. Back then, imported exotics were everywhere. Today, some say exotics need an excuse to be in the American garden. Additionally, he was a leading participant in bringing all of America to our native plants in their finest original setting—the Smokies—the zenith of horticultural biomass and diversity in America.

The Mountain Flora District of Western North Carolina, regionally known as the Land of the Sky, was called On-tee-o-o-rah, “Hills of the Sky” by the early Cherokee Indians. The land envelops you with its horticultural marvels. Massive old trees, deep forest smells, waterfalls saturating the adjacent flora, riotous color with the spring bloom. When you reach the occasional overlook, only then does the sky become a presence, as you gaze out and down across seemingly endless undulating mountains. This is the setting which nourished Kelsey’s start as America’s youngest nurseryman at age twelve. It impelled his lifelong drive to elevate native plants to preeminence in America, and his crowning finish as &#34Dean of American Nurserymen."

Beautiful Land of the Sky chronicles Kelsey's journey from the humblest of beginnings to a national prominence, near adulation. Step by step, we find remarkable parallels in the odysseys of Muir and Kelsey. While this is a biography of Kelsey, not Muir, we will take every opportunity to drop in as the chronology allows, comparing the similarities, differences, and accomplishments of the two men.

In the end, the findings provide a thesis on why history has treated these two men so differently, and unjustly—one still a national hero, and the other now forgotten. It need not remain this way and we offer remedies. And, a call to action.

John Muir is considered to be the supreme icon of western wilderness and preservation. His counterpart in the east is Harlan P. Kelsey, an often obscure and forgotten figure. In Beautiful Land of the Sky, author Loren M. Wood chronicles Kelsey’s journey from the humblest of beginnings to national prominence in horticulture and the establishment of national parks in the eastern United States. In this biography, Wood tells how, a century ago, Kelsey was the first to pioneer native plants for the American landscape and a leader in that process; how he was a leading participant in bringing all of America to our native plants in their finest original setting; and how he helped make a reality of the Great Smoky Mountains National Park, a zenith of horticultural biomass and diversity in America. In addition, this biography explores the parallels in the odysseys of Muir and Kelsey. Though primarily a biography of Kelsey, Wood compares the similarities, differences, and accomplishments of the two men. Including details gathered from more than fifty thousand items in Kelsey’s personal files, Beautiful Land of the Sky narrates the inspiring and entertaining story of how the idea of national parks was implemented east of the Mississippi.

Loren M. Wood is the overseer of the Harlan P. Kelsey Arboretum and holds a Harvard MBA. He is a civic leader in the preservation of historic houses and scenic roads and a member of the American Alpine Club and the Harvard Travellers Club. Now retired from a career in finance, Wood lives with his wife, Sally, in Boxford, Massachusetts.