The Vatican at War

From Blackfriars Bridge to Buenos Aires 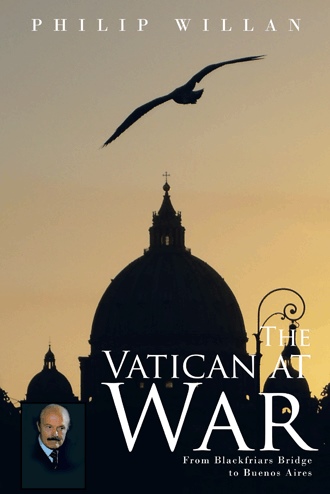 In February 2012 the Vatican lent some of the most important documents from the pope’s Secret Archive for display in a six-month exhibition in Rome’s Capitoline Museum. They included a letter written on silk by a Chinese empress who had converted to Catholicism and another on bark, from a North American Indian chief. Of greater historical moment were the 15th-century edict with which Pope Alexander VI divided the New World between Spain and Portugal, Galileo Galilei’s shaky signature retracting his view that the earth revolved around the sun, the 1521 decree excommunicating the German monk Martin Luther, and a 21-foot section of parchment scroll containing depositions from the 14th-century heresy trial of the Knights Templar. The idea of ‘Lux in Arcana’ was to show that the Vatican was not afraid to subject its dealings with temporal potentates to outside scrutiny, shining an unaccustomed light on closely held secrets from the pope’s personal archive. Paradoxically the exhibition coincided with another transparency campaign with which the Vatican did not agree. While the Holy See was putting the secrets of the past on public display an aggrieved employee was leaking its current secrets to the press. Paolo Gabriele, Pope Benedict XVI’s butler and one of his closest lay assistants, was arrested on May 23 2012 for stealing sensitive papers from the pope’s apartment. The following day the president of the Vatican bank, Ettore Gotti Tedeschi, was summarily dismissed. In voting a resolution of no confidence in its president, the board of the Institute for the Works of Religion (IOR) implicitly accused him of leaking. Among the nine accusations levelled against Gotti Tedeschi was ‘Failure to provide any formal explanation for the dissemination of documents last known to be in the President’s possession’. Financial scandals and control over the pope’s bank were among the key issues addressed by the butler-turned-whistleblower, who described himself as ‘an infiltrator on behalf of the Holy Spirit’ and claimed he had acted for the good of the church, to save it from a rising tide of corruption. As his principal channel to the outside world Gabriele chose the investigative journalist Gianluigi Nuzzi, whose book on the Vatican bank in the 1990s – Vaticano SpA – also based on leaked documents, had greatly impressed him. At the time the IOR was at the center of a power struggle over governance of the scandal-wracked institution. Pope Benedict had given instructions that the bank should apply for evaluation by the Council of Europe with the aim of achieving inclusion on its ‘white list’ of financial institutions that comply with international norms on money laundering and terrorist financing – the last things with which the Vatican would like to be associated. The battle over transparency – partly illuminated by documents leaked by Gabriele – focused in particular on the extent to which the Vatican could afford to open its books on the past. For some involved in the debate a retroactive transparency was unthinkable. The IOR had been a channel for funding Cold War anticommunist operations and contained Italian state secrets. ‘There are secrets regarding some of the worst representatives of the Italian state. That’s why they can’t afford the luxury of a retroactive transparency,’ an informed source told me. One of the most burdensome secrets from this disquieting past was the adventurous life and mysterious death of Roberto Calvi.

When Pope Benedict’s butler began leaking secret Vatican documents to an Italian journalist he was motivated by a desire to save the Catholic church from what he saw as a mounting tide of corruption. Among the issues he felt should be brought to the attention of the pope and the public were the roles of freemasonry and the secret services in Vatican affairs, and the mysterious disappearance of a Vatican schoolgirl, Emanuela Orlandi. The Orlandi affair ties the present travails of the papacy to the Banco Ambrosiano scandal and the death in London of its chairman, Roberto Calvi. The banker found hanging under Blackfriars Bridge was caught in a web of Cold War intrigue, from which the Vatican is still trying to extricate itself. Now updated and expanded, this book was first published as ‘The Last Supper: The Mafi a, the Masons and the Killing of Roberto Calvi’.

Praise for ‘The Last Supper’

‘This powerfully written account will be required reading for students of recent Italian and Vatican history.’ The Tablet.

‘The meticulously researched book makes for a surprisingly smooth and fascinating read.’ Bloomberg.

‘Willan wrote the wonderful Puppetmasters about post-war Italian politics and this is more of the same, a smaller patch examined in more detail.’ Lobster.

Philip Willan is a British journalist who has worked in Rome
for more than 30 years, specializing in Cold War politics and
intrigue. He contributed research to David Yallop’s bestselling
book ‘In God’s Name’ and to Charles Raw’s ‘The Money
Changers”. His fi rst book, ‘Puppetmasters: The Political Use
of Terrorism in Italy’ was published in 1991 and is available
from www.iuniverse.com.