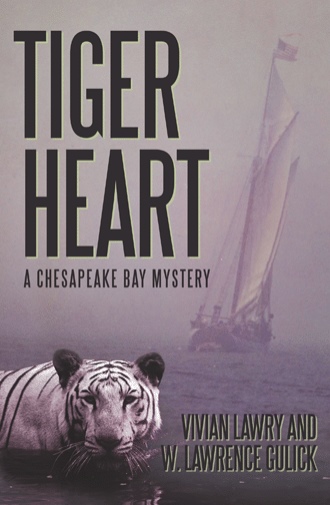 Nora steers Duet down the Chester River, wondering how quickly the new West College trustee will learn the rudiments of sailing. Buck Brady is big, burly, and middle-aged, with sandy hair, a well-trimmed mustache, a quick smile and a deep voice. Her glance takes in his unbuttoned cotton shirt, beefy leathered hands, the yachting cap set low over his left eyebrow. New boat shoes strike the only discordant note in his old salt appearance. If she didn’t know better, Nora would expect him to spin a yarn of his early sailing days. She scans the sky. Dark clouds are forming in the west. “Buck, take the helm. I’m going below to catch a weather report.” They are in the middle of a wide, open space at the mouth of the Chester River, no other boats in sight, nothing ahead but the red channel marker pointing the way to the Chesapeake Bay. “Leave the channel marker to port and head for the open water.”
Buck says “Aye, aye, skipper.”
She senses that he’s checking out her ass as she starts down the companionway.

West College’s incoming Board of Trustees member, Buck Brady, wants nothing more than to help his wife’s alma mater. The school has been in upheaval recently over a murder investigation and the subsequent resignation of its president and is struggling to recover its image. Brady charters a schooner to help his fellow trustees welcome the new president of the college, but no one could predict the aftermath. After one trustee is lost overboard in a storm, everyone aboard wonders if it was really an accident.

As a series of apparently unrelated accidents and attacks plague the college, professors Nora Perry and Hendrick van Pelt, along with several of the trustees, suddenly find their lives threatened. As decades of passions, infidelities, and obsessions are unveiled, Nora insists the events must be connected. But without a motive and no clear suspect to question, Nora and Van have no choice but to partner once again with Captain Frank Pierce to find the connections and reveal the twisted motives hidden in human hearts.

In this continuing mystery saga, a sleuthing trio must grapple with deceit, murder, decades-long grudges, and love in the beautiful setting of the Chesapeake Bay.

Vivian Lawry is an award-winning fiction writer who has been published in more than three dozen literary magazines and is the coauthor of Dark Harbor: A Chesapeake Bay Mystery. Formerly a psychology professor, a vice president for academic affairs, and an association executive, she currently writes, teaches, and sails. Visit her online at www.vivianlawry.com.

W. Lawrence Gulick has skippered boats from New England to the Caribbean and is the coauthor of Dark Harbor: A Chesapeake Bay Mystery. He has been a World War II merchant mariner and paratrooper, a Princeton-trained neuroscientist, a professor, and a university president.