A Star to Sail Her By

A Five-Year Odyssey of Adventure and Growth at Sea 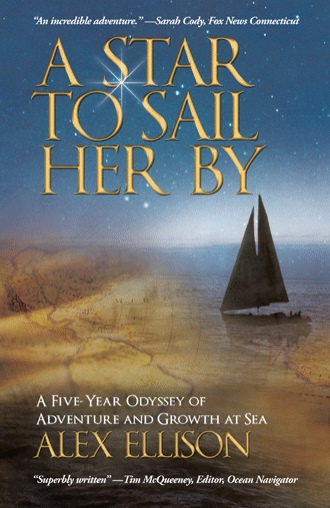 Without warning, I heard my mother shout, “Lee!” to my father at the helm. I never saw the wave break. According to her it was huge, rogue in that it was alone, and towered five or six times the height of its neighbors. A deafening crash of water filled the cockpit, cascaded down the companionway and enveloped the nav station as well as much of the main salon. The boat … sluggishly wobbled forward under the ponderous weight. After the initial shock wore off , we bailed to augment the capacity of the automatic bilges, which were working overtime. My sister and I slid around the cabin like we were surfing. Mom took the helm, and Dad and I tried to take inventory and salvage what we could. The nav station was hit, and the electronic GPS was down, but the radar was working. The VHF was out, although the SSB was working. Our computer, a new Mac, was drowned. We all dried with sponges, and then towels; nervous laughter, and sighs, and hugs followed. The sky was clear and we had our sextant; it would be light before we arrived at Grenada’s south shore.

In 2003, casting their fortunes—and their lives—to the wind, the Ellison family embarked on what they thought would be a one-year voyage on their forty-seven-foot sloop, Promise. Five years and more than 25,000 nautical miles later, the family of four returned to the United States and dry land.

In this memoir, author Alex Ellison chronicles his family’s adventures on the seas. Culled from a detailed daily journal that Ellison began keeping at the onset of the voyage when he was just eight years old, A Star to Sail Her By reveals his transition from enthusiastic child to capable sailor and reflective young adult. He learned two important lessons as they traveled from port to port: not everything always works the way it should, and change is really the only thing you can count on.

“A Star to Sail Her By is sure to entertain and inspire people who dream of adventure.”
—Jennifer Castle, editor, PBSkids

“Ellison’s earnest, genuine style is reminiscent of Robin Graham’s in Dove. In crafting a twenty-first century bildungsroman at sea, with a tender family spin, he’ll leave you positively envious.”
—Richard King, PhD, professor of literature of the sea, Williams College

“In and of itself, this memoir of a 25,000–nautical mile voyage is informative, entertaining, and eye-opening. That a high school student wrote it is astounding.”
—Meredith Laitos, editor, SAIL

Alex Ellison, originally from Essex, Connecticut, graduated from Phillips Exeter Academy and now attends Williams College. He has written for his school’s chapter of the international group Journalists for Human Rights and has published four articles previously about aspects of this sailing journey.