How to Kill a Rock Star 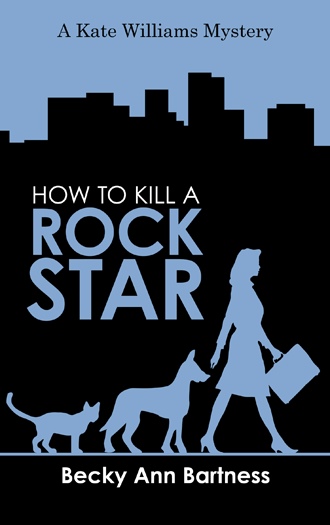 August was the wrong month to start my jogging program. Even at five-thirty in the morning, the temperature was in the nineties and the mercury was rising fast. I’d taken Ralph, my large dog of indeterminate breed, with me, thinking he would be thrilled with the opportunity to run, sniff, pee, and poop along the two-mile jogging path next to the canal. We had made it only a quarter-mile, though, when he plopped down under a Palo Verde and refused to take another step. I told him I’d stop by for him on my way back. I’m not sure he understood, but I’m fairly sure he didn’t care: he was asleep before I made it ten feet down the trail.
As I ran along the gravel path beside the canal, sweat dripped into my eyes and soaked my tank top and running shorts. Normally, what they say is true: Arizona has a dry heat. But August is monsoon season, and the humidity is unusually high for us. In other words, there is no redeeming value whatsoever to Phoenix in August.
I was on a quest to lose weight, though. So unbearable heat notwithstanding, I was jogging when I should have been asleep in bed.
The shade of graceful willows and eucalyptus trees lining the canal as it wandered through the grounds of the Biltmore Hotel provided a bit of respite from the heat. I rounded a gentle curve and saw what looked like a heap of glittery red fabric lying on a grassy berm. As I got closer, I realized there was more to the heap than fabric.
I knelt beside the woman and saw right away that CPR was going to be a waste of time.  Red ants had discovered the body and streamed into her vacant eyes and slightly open mouth in search of whatever it is ants find intriguing.

As Kate Williams jogs along a gravel path, she thinks there is no redeeming value whatsoever in Phoenix in August—even at five o’clock in the morning. But as she rounds a curve and discovers a dead woman, the attorney-at-law and repeat innocent bystander cannot believe her bad luck. This is the third dead body she has found in six months. Worse yet, the murder victim is rock star Queen Ta Ta.

Caught in the wrong place at the wrong time again, Kate finds herself in the middle of a media blitz, quickly becoming the number one murder suspect in the court of public opinion and in the mind of Phoenix Police Detective Webber. After Kate hires a public relations firm to run interference with the press and prove she is not a recently rejected middle-aged woman turned ruthless killer, she knows she either has to turn herself in or solve the murder with the help of her friend Tuwanda Jones, an ex-hooker turned college student.

In an attempt to find the real killer, Kate and her friend go undercover at a five-star resort—and unwittingly find themselves the next targets.

Becky Ann Bartness is an attorney who has been practicing law in Phoenix, Arizona, for over thirty-three years. This is her sixth Kate Williams mystery novel, although she prefers to characterize her books as part of the subgenre of “funny mysteries.” She is married with two children and a dog.