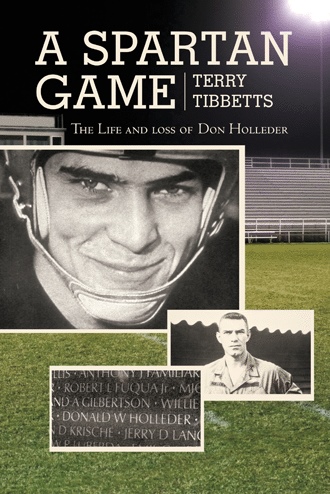 In November 1955, Colonel Earl “Red” Blaik, the head football coach at the United States Military Academy at West Point, told his team he did not relish the prospect of crossing the field the next day in front of one hundred thousand fans to congratulate the arch rival Navy coach on a victory. Then a player announced, “Colonel, you’re not going to take that walk tomorrow.” His quarterback, Don Holleder, had served notice that he was about to lead his team to the greatest win in Army football history.

In the first authoritative biography of Don Holleder, former sportscaster Terry Tibbetts shares the inspirational story of how Don overcame limited academic skills to attend West Point; grew to be an All-American football end; volunteered to become quarterback when the coach needed leadership; and sacrificed his football career to serve his country in Vietnam. Along with remembrances from Don’s daughters, his West Point roommates, fellow players, and Army colleagues, Tibbetts presents a candid glimpse into the journey of a man whose life was not just about winning, but also about finding the courage and perseverance to overcome great obstacles.

The inspiring story of Don Holleder is a model for anyone willing to work hard to achieve, win, and most of all, place the team above self.

Terry Tibbetts was a sportscaster for twenty-five years and interviewed many Hall-of-Fame athletes, including Carl Yastrzemski, Nolan Ryan, and Bob Cousy, as well as sportscasting legend Curt Gowdy. He now divides his time between New Hampshire and Florida.

RICH ELLERSON,head football coach, US Military Academy at West Point, has been a lifetime college football coach. He held head coaching positions at Southern Utah and California Polytechnic State before taking over at Army in 2009.