Tyger on the Crooked Road 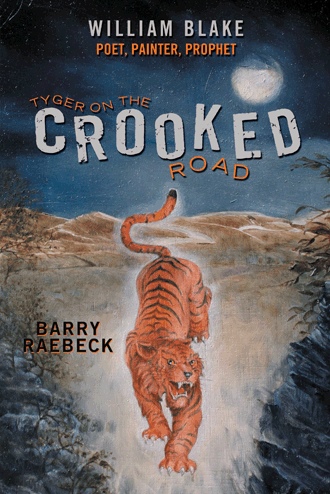 Improvement makes strait roads, but the crooked roads without Improvement are the roads of Genius. —William Blake, The Marriage of Heaven and Hell One of the world’s most brilliant, visionary artists, William Blake was a painter, engraver, illustrator, and poet as well as a mystic of extraordinary proportion. But he was also a political radical, a Dissenter, and a friend and supporter of Thomas Paine, the English common man, and the early stages of the French Revolution. This remarkable personality is reimagined in Tyger on the Crooked Road, a bold historical novel that delves into both the man and the legend. In the late-eighteenth century, Blake struggles to make ends meet. He is harassed by repressive authorities, denied professional membership in the Royal Academy of Art, and considered by major artistic and literary figures of the day to be little but a willful eccentric. Not a few of them think him mad. But beyond his art and politics, Blake is a loyal friend and a passionate and devoted husband. His life comprises an amalgam of conflict and compassion, adventure and failure, violence and political intrigue, frustration and inspiration. This Blake is a man of profound appetite and exquisite skill—one who offers an enduring voice of strength, justice, promise, and capacity. Tyger on the Crooked Road brings Blake vividly to life, a genius underestimated in his own time but known and beloved today.

Barry Raebeck is a high school English teacher whose novel In the Center of the Doughnut received High Honors at Wesleyan University. He holds a PhD in educational leadership from the University of Virginia and is also the author of two books on educational innovation. He lives with his wife, Susan, in East Hampton, New York. They have three grown daughters.