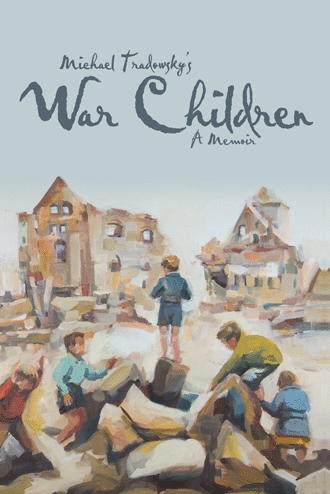 Then the humming would grow into the droning of hundreds of planes that would wear on and on. Are they circling? Are they continuing to Jena, Chemnitz, or Dresden? Surely they will come back over us on the way out. When we first tacked up the map, I studied it with interest, even a slight feeling of appreciation, as if by locating the danger I could control it. But now, after hundreds of nights, it had become a record of dread. I tried to look around the map when I glanced toward the door. Besides, it was useless. Following the concentric circles, the danger closed in on us like the arches between someone’s thumbs and index fingers closing around your throat.

In Berlin in 1939, Michael Tradowsky celebrated his fourth birthday with his parents by helping his father tack up blackout paper over their windows. Germany was at war. For the next six years, the Tradowsky family endured the nightmare of the German home front.

Intense and powerful, War Children shares the incredible saga of an ordinary German family during World War II. Looking back from the vantage of seventy years, Michael’s memoir directly confronts how his childhood experiences, despite his parents’ attempt to give him a normal upbringing, were shaped by an epoch of rampant evil under Hitler.

Michael shares how each member of his family had his or her own way of fighting against the regime. His courageous and outspoken aristocratic mother was determined to protect her son from Nazi brainwashing and sacrificed everything but her love and honor to keep her children alive. His father, a promising theater director, rubbed shoulders with the great entertainers of the time—until his refusal to join the Nazi Party destroyed his aspirations. But perhaps Michael’s love for his baby sister exemplifies the tragedy of a childhood spent in war, for her very life depended on him carrying her to the bomb shelter.

From winding roads twisting through the tall pines of the Black Forest to trucks crammed with refugees, War Children offers a sobering testimony for children victimized by war, past and present.

Born in Berlin in 1935, Michael Tradowsky lived through World War II as a child and immigrated to the United States in 1958. He taught dentistry at Case Western Reserve University and earned a BFA from Cleveland Institute of Art. Tradowsky lives on a farm in Ohio with his wife and sculpts bronzes in his foundry.