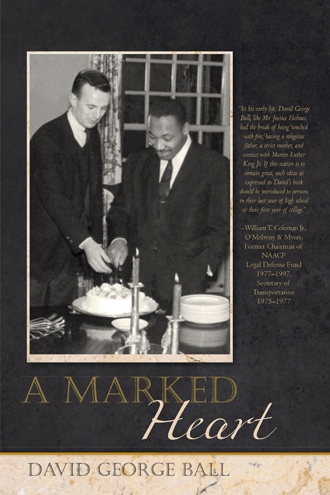 The son of a missionary and a Baptist minister, seventeen-year-old immigrant David George Ball was following his destiny to become a pastor. He had always dreamed of making a difference in people’s lives. But when he met the then relatively unknown Martin Luther King Jr., the course of Ball’s life changed forever.

In this memoir, A Marked Heart, Ball narrates his journey: beginning with growing up in wartime England; immigrating to the United States in 1954 to take the pastor’s course at Chicago’s Moody Bible Institute; attending Yale University as a scholarship student; and, most importantly, meeting King. Later, he worked on Wall Street as a lawyer, started a family, championed the 401(k) plan, and served as assistant secretary of labor.

A Marked Heart describes how Ball’s encounter with King inspired the rest of his life’s work, and it provides a multifaceted look at his immigration, education, family relationships, career, and his commitment to public service. Though Ball never became a minister, his story communicates how his commitment to God and prayer guided his life.

“A heartwarming portrait of faith pushing back against adversity, in an amazing journey inspired by Martin Luther King.”
—The Right Reverend Herman Hollerith IV, Bishop of the Diocese of Southern Virginia Episcopal Church

“In his early life, David George Ball, like Mr. Justice Holmes, had the break of being ‘touched with fire,’ having a religious father, a strict mother, and contact with Martin Luther King Jr. If this nation is to remain great, such ideas as expressed in David’s book should be introduced to persons in their last year of high school or their first year of college.”
–William T. Coleman Jr., O’Melveny & Myers, Former Chairman of NAACP Legal Defense Fund 1977–1997, Secretary of Transportation 1975–1977

David George Ball came to America in 1954. He attended Moody Bible Institute in Chicago and Yale University. During his Wall Street career, he championed the first 401(k) plan adopted by a large company. He served as assistant secretary of labor under President George H. W. Bush. Ball and his wife live in Virginia.