The Life and Times of Señor Huevos Grandes

by Roger & With Melissa Nelson 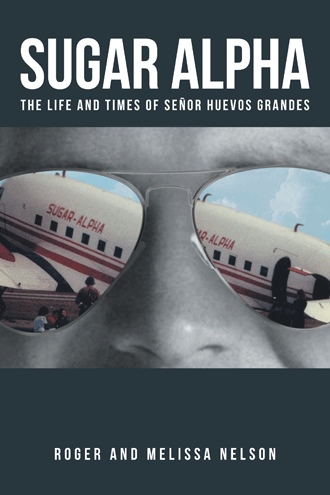 Prologue: The Rule of Three

Moonbeams cut through broken clouds over a calm Caribbean Sea and shined on a U.S. Coast Guard Cessna Citation jet flying four miles above the water, following an unknown aircraft running without lights toward the Bahamas.

“Roger Omaha,” replied a voice reeking of authority. “Nassau is alerted and standing by. Almighty out.”

Somewhere south of the Mason-Dixon Line in a remote farmhouse distinguished only by two towering antennas, a young, self-assured 30-something man, clean-shaven, with a full head of thick, untamed dark hair sat dressed in an old pair of jeans, with his favorite plain brown leather belt, and a faded blue skydiving t-shirt, presiding over a maze of sophisticated radios, listening to the Coast Guard transmissions.

Roger Nelson knew exactly what this meant—thanks to a Bahamian official he’d met and befriended when he’d bought part of a Bahamian island a while back.

“Almighty” was the code name of the American drug interdiction base station on the U.S. Navy base at Guantanamo Bay, Cuba. “Omaha” was equipped with tracking radar that could follow aircraft from high above, and he also knew the U.S. had given helicopters to the Bahamas to help chase down drug smugglers. Roger silently thanked his friend and keyed his mike.

“Whiskey Oscar, this is Papa. Are you with me?”

“Like you’re sitting next to me!” answered a tense, excited voice.

Roger was relieved to have reestablished commo with Billy, the skittish, black-haired pilot of the 20-year-old Beechcraft Excalibur Queen Air being tailed by the Citation. They had planned to keep in contact every 30 minutes, each time changing frequencies to a lower band, both to improve clarity as their distance decreased and help lose anyone trying to listen in. The tail, however, changed Roger’s plans. Hoping his gut feeling was wrong, he keyed his mike again.

“Have you seen Wendy yet?”

“Left her fifteen minutes ago, looking fine.” Roger checked a map on the wall and moved a marker just north of the Windward Passage, the strip of water between Cuba and Haiti.

“Slow down and turn to zero-one-zero.”

“Copy slow down and turn to zero-one-zero.”

“Target is slowing and turning through three-six-zero,” said the Citation pilot.

“Whiskey Oscar, return to original course, and stand by. Over.” Roger sighed, but his eyes glinted with resolve as the Citation pilot confirmed that his target had resumed its previous course.

“Whadda you got?” queried Billy’s worried voice. Roger knew that at that moment the young, green pilot had completely forgotten the fatigue of flying 2,000 miles in 20 hours without a break, that time was stretching out for him, that he was probably mashing his face against the windows looking for his tail and seeing nothing but moon and stars, then looking behind him at the 1,500 pounds of Colombian marijuana baled and stacked neatly in the seatless, Visqueen-lined fuselage.

“What should I do? What do you think?” crackled his panicky voice over Roger’s radio. “I’m gonna turn back, all right?”

“Okay,” Billy replied but his voice did not sound okay, “but I’m gonna tune in their frequency, Okay?”

“Not okay,” Roger snapped. “Keep your discipline, you’re all right. Above all, maintain contact with me. That is the key. Stay with me! We got options, and we’re gonna use ‘em. Got it?”

“Got it,” said Billy in a still-tense but no longer panicky voice.

Roger cursed himself for letting such a novice fly this gig, but quickly ditched the hindsight scolding in favor of dealing with the situation as it was. Billy was normally a basket case flying over the ocean even without pressure. It was going to be a long night, but Roger had enough confidence for both of them—confidence in his planning and in his ability to execute it.

“Game on,” he said out loud to himself. Roger had long ago learned the “rule of three”—always have three options—and the experience to know when to switch gears. In this case, it was time for Plan B. He keyed the mike on another radio.

“Panther team, come to Papa,” he called calmly to his auxiliary team in Blairsville, Georgia, though he felt a thrill of anxiety as he did. His previous trips had always gone like clockwork, and the Blairsville backup crew had never done anything except collect its fee. “Panther team, come in. Over.”

“Stand by for welcome mat,” said Roger. “Over.”

Roger kicked back in his chair. He knew his “just-in-case-boys” were now jangled with adrenalin and reviewing every piece of their part in Roger’s carefully designed secondary plan. The veteran smuggler felt the adrenalin too; for the first time, he would see if he and his organization would measure up to a real threat. Two hours later, Billy’s periodic radio pleas for reassurance gave way to a far more measured voice on Roger’s headset.

“Almighty, this is Omaha,” said the Citation pilot. “Suspect plane turning three-one-zero towards Bimini. Appears to be heading stateside.”

“Roger Omaha. Per Rampart, Cobra One and Cobra Two are staged in Opa Locka and West Palm awaiting dispatch.”

Roger was puzzled by Almighty’s involvement. Usually, the regional El Paso Intelligence Center (EPIC) handled drug, human, and weapon smuggling interdiction across the southern border. Maybe Almighty had only stumbled across the Queen Air and hoped to get lucky. If that was the case, the operation was not compromised, but Roger still needed to get Billy and his cargo safely on the ground—and with helicopters waiting for them in Florida, that validated Roger’s earlier decision to change his plans.

Right on schedule, Billy dropped down to 50 feet north of Bimini and turned west. The Citation followed, reducing its own altitude to maintain radar contact.

Billy soon crossed the US coastline and, as Roger expected, Almighty handed the mission off to EPIC, which dispatched the Opa Locka and West Palm helicopters.

Roger, tracking Billy’s position by the Citation pilot’s frequent situation reports, told him to fly towards Lake Worth, 100 miles north of Homestead.

Roger pumped a fist in his farmhouse redoubt. By ordering Billy to fly low, he’d forced the Citation pilot to burn more far fuel pushing itself through the thicker air so it could keep tracking Billy. His tactics had put the Coast Guard pilot in a box he couldn’t escape.

These authorities were well practiced in coordinating their tactics based on this operational assumption—but Roger’s plan was specifically designed to beat these tactics.

Skydiving and drug smuggling pioneer Roger Nelson lives life out of the box. Fueled by a love for adrenaline and adventure, Roger goes after everything he wants with gusto. But now Roger is ready to retire from smuggling. With a parachute center to run and a family to raise, Roger knows it is time to stop the cat-and-mouse games he has been playing with the authorities for years.

He and his longtime partner, Hanoi, plan one final run to Belize, where they intend to fill their Douglas DC-3 with enough cannabis to set them up for life. But then Hanoi dies in a plane crash in an attempt to make some “legitimate bucks” flying fish in Alaska while they wait for the growing season to end.

Left without a partner or plane, Roger remains determined to return to his family for good. To do so, he decides to stay true to himself and follow through with his retirement run. Roger must rely on a colorful cast of characters and the most unlikely airplane for a gig ever—Sugar Alpha, the legendary DC-3 with the secret fuel tanks and not-so-secret paint job—to help him complete the most daring run in the history of smuggling.

Roger Nelson started skydiving when he was sixteen. By the time he died at age forty-seven in a skydiving accident, he had amassed more than 10,000 hours as a pilot; 9,000 parachute jumps; 100 hours of freefall time; multiple instructor ratings; national skydiving championships; and skydiving world records.

Melissa Nelson, Roger’s oldest child and only daughter, made her first parachute jump with her father when she was five years old. She earned her pilot’s license in 2012 and currently lives in Moab, Utah, where she runs a retail store for BASE jumpers and lives her own “other life” as a BASE jumper, slackliner, and yoga practitioner.