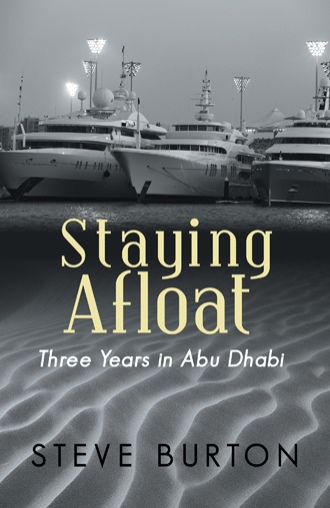 Dateline: Abu Dhabi, June 2007
International flight arrivals to, and departures from, the UAE are typically scheduled for the early hours of the morning. This is not designed to intentionally antagonize passengers, but to cater to the airline’s preference to land and take-off on a runway shorter than fifty kilometers (thirty miles). As explained, an airplane’s wings better meet design criteria after the daytime desert temperatures drop because air molecules become denser so lift becomes greater ... inshallah. If God wills.
The twenty-one hour return journey to Abu Dhabi included seven airline meals all meticulously wrapped in aluminum foil. I have never consumed seven meals on the ground in twenty-one hours. Thank God for French wine. I arrived at the Abu Dhabi International Airport at 0045 only to discover that my new employer had not delivered the work visa to the airport’s Visa Office as had been confirmed prior to departure. I was unable to pass through the passport check counter despite multiple pleas. No one from the company was waiting in the arrival lobby to pick me up. Without a cell phone, called a MO-bile, I convinced the semi-English-speaking clerk at the visa window to place a call to the contact name that had been forwarded to me prior to departure. There was no answer―no visa.
There began a two hour wait on a concrete bench watching hundreds of arrivals stream through the passport counters in the immigration hall. The “contact” answered the fifth call at 0330. He apologized and stated he would arrive at the airport within the hour with the work visa. Another hour on the hard bench. My rear end was numb. The clerk at the visa window alerted me that the document had arrived and an Immigration Officer stamped my passport which sanctioned my stride through the final six meters (nineteen feet) denoting official entrance to the United Arab Emirates.

Home Sweet Home
The smallest villa I could find was located on the leeward side of Abu Dhabi island in a large, walled-in compound predominantly inhabited by Western expats. “Small” was a 465-square-meter (5,000 square foot), two-story, five-bedroom, six-bath, marble-floored behemoth with twelve-foot ceilings and separate housekeeper’s quarters. It was a gargantuan echo chamber. Window coverings and kitchen appliances were not included, although five of the bathrooms contained a bidet, perfect for washing underwear or wringing out a mop. The walled-in, non-landscaped backyard was a cat’s paradise―a big sandbox. Our furniture, in ocean transit from California to Abu Dhabi via a stopover in South Korea, would not begin to furnish a quarter of the villa. Prior to leaving California, I had no idea how much or which of our belongings to ship because a future residence was an unknown. The Company’s furniture allowance was apparently designed to partly alleviate the spartan look of a warehouse.
The villa was brand-spanking new and we were to become its first occupants. The floors, walls, windows, stairs, kitchen, bathrooms and cabinetry were coated with construction and fine desert-sand dust. Two of the toilet bowls offered exercise pool privileges for several physically fit cockroaches. I informed the leasing company that the clean-up crew apparently got lost on its way to the villa.
“No. That’s your responsibility. Just hire a bunch of Indians,” the leasing agent replied, rolling his eyes in recognition of my obvious ignorance to life in his country.
The security guard at the entry gate to our villa compound provided the mobile number of Babu, an Indian who operated a cleaning service. The “service,” comprised of seven sandaled workers, arrived on vintage, single-speed bicycles. One of the laborers had a hose slung over his shoulder like a bandolier, and four others carried long-handled squeegees resembling coat-of-arms flags. A vacuum, broom, rags, and toilet bowl brush to swat cockroaches would, I assumed, certainly follow. I watched in wonderment as the seven exterior doors were opened and the hose hauled upstairs. Seven sets of fluorescent teeth belonging to the dark-skinned, smiling Indians lit up the hallway. That temporarily eased my apprehension until water began to cascade down the marble staircase. In disbelief, I ran upstairs only to gasp as the walls, including electrical switches, windows, countertops, cabinetry, and bathrooms were hosed down as if they were on fire. Sacrificing civility, I waved my arms and let loose with a litany of obscenities. The head hose honcho stated with a reassuring smile, “Do we all time.”
The six squeegee wizards pushed what had become a lake on the marble flooring out the open doorways. Following thirty long minutes of visual torture, the cleaning crew bobbed their heads back and forth with appreciative smiles indicating the job was completed to their satisfaction. I was prepared to strangle someone. Should I dare reach for a light switch and chance electrocution? That would not bode well for my wife to discover my stiff body lying on the marble floor with hair sticking straight out when she arrived in another week. In the exasperating hour that followed the crew’s exit, the water that coated the entire interior of the villa, floor to ceiling, evaporated. Why, of course! All of the doors were open, and it was 41C (106F) outside. What a steal! The entire power wash job cost a mere 100 dirham ($27).
The twenty-foot container, partially filled with personal belongings that we felt were important to ship from California, landed five long weeks after my arrival. Pamela arrived at midnight three days later, not in a container. I picked her up at the airport in the recently purchased Toyota Prado and escorted her to our new home away from home. It was the first time she set eyes on the villa. I had placed the few pieces of furniture, three throw rugs, four towels, and hanging clothes where I hoped they would be acceptable. Sadly, a 220-volt villain had cremated the 110-volt CD player. Her jubilant smile eased my anxiety after she completed a tour of the vast premises and located the air-conditioning thermostats. I handed her the dozen yellow roses that had hidden in the refrigerator. “Welcome home.”

If You Got It, Flaunt It
In Abu Dhabi, the words “hundreds of thousands” of dirham had become passé`. The word “thousands” was substituted with “millions” – hundreds of millions – and, ho-hum, “billions” – lots of them. If there was a spending cap, it was an unknown. In 2007 through 2009, the cost of many of the construction projects on which I worked was implausibly higher than a business financial plan could justify. The global supply of human resource talent was stretched and its demand high. Master planners, consultants, architectural firms and contractors charged outrageous profits knowing that their availability, expertise and promise to perform within sometimes unattainable deadlines were their ace cards. Conceptual iconic structures were launched off drawing boards with lightning speed. Project approvals were made with equal rapidity and without an accountant’s review of economic viability. The process of competitive bidding (or tendering in everywhere-but-the-United States-speak) a project often produced numbers that turned out to be more cosmetic than realistic. A plan to service and maintain finished projects was absent. If, or when, a business plan was requested midway through construction, it would more than likely not pencil out.

When author Steve Burton heard the plan for transforming a relatively untouched bird sanctuary in the Middle Eastern emirate of Abu Dhabi into a complex, global entertainment and premier yachting destination within thirty months, he thought the idea was impossible. The Rulers believed otherwise. It will be done. Burton was tasked with performing at the highest level and not sweating the small stuff—like money. ‘No’ was removed from his vocabulary. Those were the rules. Deadlines were another one. It was no small endeavor.

Recognized as one of today’s premier marina development specialists, Burton was hired by Abu Dhabi’s flagship real estate development company in 2007. In Staying Afloat he narrates an account of cross-cultural encounters, stratospheric expectations, unimaginable obstacles, and hilarious day-to-day experiences faced as an American expatriate living for three years in one of the wealthiest and most culturally diverse countries on the planet in the midst of the world’s most politically volatile regions.

Staying Afloat conveys a unique blend of cultural insight, candor, and wit while communicating that an open mind, a keen sense of humor, and a supreme level of patience and determination are indispensable for living and working in a foreign country.

STEVE BURTON a marina development consultant, cultural adviser, and author, earned a bachelor of arts at the University of California at Davis and a master of arts at San Francisco State University. He worked twenty years in real estate development and construction and eleven years in the maritime industry. Burton and his wife currently live in the San Francisco Bay Area.