Thoughts of a Scientist, Citizen, and Grandpa on Climate Change

Bridging the Gap between Scientific and Public Opinion 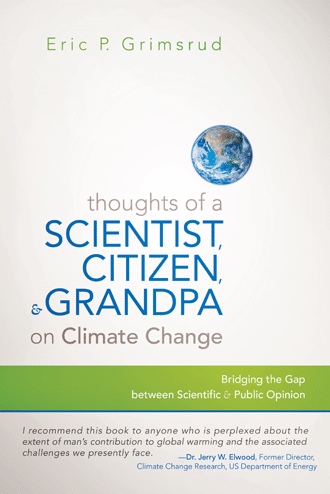 s suggested by the title of this book, I have spent my professional life as a scientist and during much of it have done research in the specific area of atmospheric chemistry. As a result I have acquired a good understanding of the various environmental issues that are directly related to Earth’s atmosphere. I have also learned a lot about the scientific communities of our country and about how they come to their collective views. As a citizen of the US during this same period and perhaps because I was raised in a small town newspaper family, I have also been very interested in the processes by which the general public comes to its collective views, some of which have concerned the same environmental issues I have studied. As also suggested by this book’s title, my wife and I are now grandparents due to the arrival of Charlie and Kate during the last year. Therefore, we are, of course, intensely interested in the well-being of these youngsters as well as that of their future siblings, cousins, friends and descendents. All three of these past and present interests have merged to provide the motivation for this book.

The subject of global warming has been of great interest to both the scientific community and the general public during the last two decades and is certain to become of central importance to our descendents throughout the 21st century. There is presently a strong consensus among the professional scientists involved in this field that global warming is occurring and that much of it is being caused by the activities of man. These scientists have also provided some guidelines as to what should be done in order to avoid the detrimental effects of these changes in our climate. According to most polls taken in the last couple of years, a slim majority of the general public of our country also seems to believe that man-caused global warming is occurring.

At the same time, however, the public’s perceived importance of the issue of global warming has not yet prompted them and their elected representatives to take an appropriate level of action. Of the large number of problems that face us today only a small minority of the general public considers global warming to be among our most pressing. According to a recent poll taken in November, 2008, by Canwest News Service of Canada, only a minority of the citizens of 11 different countries including the USA indicated that they would be willing to either spend extra money or lower their standard of living if that was required in order to address global warming. This stance seems distinctly unwise in view of the real possibility that continued warming could render all of the other endeavors of man pointless in the longer run. Therefore, it is clear that if appropriate levels of corrective actions are to occur in a timely manner, a much greater level of understanding, conviction and determination will be required of the general public and its elected officials.

The considerable gap that still exists between scientific and public opinions on the subject of global warming constitutes, at the very least, an enormous waste of our nation’s extraordinary talent and investment in science. Nevertheless, we will examine in this book whether or not there are valid reasons why this gap exists. Is it possible, for example, that a very visible and skeptical portion of the public knows more and has better judgment than the recognized scientific communities on this issue? Or could it be true, as some have suggested, that the scientific communities are overstating the urgency of the global warming problem for their own ulterior motives? Or is it true, as many Americans seem to think, that the scientific communities have not yet actually made up their minds on whether or not man is contributing significantly to global warming?

There have been many books written on the subject of global warming, to date, and, therefore, one might question why the world needs another. Given the paramount importance of this topic, however, it seems that there is still a need for additional books that examine and discuss this issue from a variety of perspectives using language that suits different levels of experience and knowledge. From my own vantage point as a scientist, citizen, and grandparent, I will use language and arguments in this book that I believe are well-suited to a wide range of individuals within the general public. I believe that this book will be particularly helpful to those who already know quite a bit about the subject of global warming but are still confused as to how all the pieces fit together and are undecided with respect to their own “bottom line” conclusions. While trying to be scientifically correct, my style will be conversational without use of equations and graphs. I will endeavor to provide a background and overview of this topic that will be immediately useful for assessing and assimilating the new information and arguments we are daily exposed to by our public media and in communications with other citizens and our elected representatives. In short, I have attempted here to provide an “easy read” and, hopefully, a “page turner” on a subject that is relatively complex, but of the greatest importance. Each chapter can be read in any order preferred. I will finish this introduction with a few personal comments. When contemplating the serious subject of this book, some might feel guilty about the distinct possibility that they have not done nearly enough during their lifetimes to address the problem of global warming and, in all likelihood, have contributed to it. It might be helpful, therefore, for the author to confess that he is as guilty as most of that offense. While I was directly exposed to this environmental problem during my professional career, I did not do nearly enough to address it in my own personal life until very recently. Only after my retirement from full time employment was I able to sit back, study some more, and then clearly see the great need for far more immediate personal and public action on the specific issue of global warming. Therefore, I am in no position to preach to others about their past deficiencies in this area and will definitely not do that here. My object is simply to share my current thoughts with whomever is willing to listen, in the hopes that we can now begin to get our country to do whatever needs to be done in order to forcefully address the problem of global warming before it’s too late.

Introduction
Chapter 1: Man’s Effects on the Earth’s Atmosphere
Chapter 2: The Ice Ages and Global Warming
Chapter 3: Searching for a Flaw in the Theory of Anthropogenic Global Warming
Chapter 4: Are Scientists Really Divided on Anthropogenic Global Warming?
Chapter 5: Lessons of the Chlorofluorocarbon/Stratospheric Ozone Controversy
Chapter 6: Musings of Carl Sagan on the Survival of Intelligent Forms of Life
Chapter 7: Churchillian Leadership Needed for the Next Decade
Chapter 8: Getting Past the Forces of Denial
Chapter 9: So What’s Ahead for Us?
Definition of Terms and Acronyms
Additional Reading

Global warming has been a subject of great interest to both the scientific community and the general public during the last two decades. The consensus among scientists is that global warming is caused by man’s activities. At the same time, however, the public’s perceived importance of the global warming issue has not yet prompted them or their elected representatives to take an appropriate level of action.

In Thoughts of a Scientist, Citizen, and Grandpa on Climate Change, author Dr. Eric P. Grimsrud discusses this disparity of thought and examines whether there are valid reasons for this gap. He provides a basic scientific understanding of the global warming issue and talks about the substantial economic and political impacts. He also presents a brief review of the most current literature providing evidence for anthropogenic global warming (AGW) and uses a question-and-answer format to dispel the arguments against global warming.

From his vantage point of a scientist by trade, a citizen, and a grandfather, Grimsrud takes a stand on this issue that is certain to become of central importance to our descendents throughout the twenty-first century.

Eric P. Grimsrud graduated from St. Olaf College in Northfield, Minnesota, and the University of Wisconsin–Madison, receiving a PhD in chemistry. He was a professor of chemistry at Montana State University–Bozeman, for twenty-nine years. Grimsrud lives near Kalispell, Montana, with his wife, Kathy, and their Labrador, Svart som Bek.