Me, Mike, and the Agency 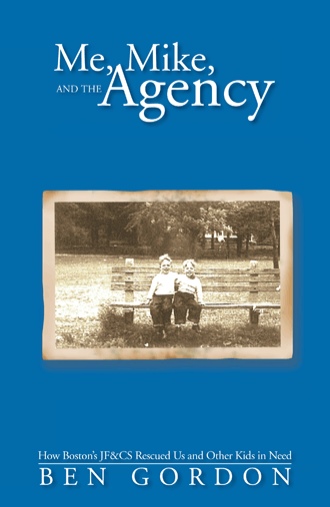 The terms “group home” and “foster care” are often fearsome labels, Dickensian in character, associated as they frequently are with unthinkable historic and modern outrages. But for author Ben Gordon and his brother Mike, their relationship with Jewish Family and Children’s Service of Boston was anything but fearsome.

In this memoir, Gordon narrates his experiences beginning in 1950 when he was nine years old and his brother Mike was eight. After being taken from a dysfunctional home, the two brothers resided in three group homes and two foster homes during a span of twelve years. With details culled from detailed agency records, Gordon tells their story.

Me, Mike, and the Agency relates the Gordon family’s difficulties and the manner in which the agency was, or was not, able to satisfy the boys’ needs. It captures and conveys Gordon’s emotional responses to his situation, and it considers agency policies and practice as they affected Gordon, Mike, and other children whose lives were profoundly shaped by the Jewish Family and Children’s Service of Boston.

Ben Gordon earned a doctorate in American studies and is retired from the classroom where he taught English and American history to adolescents. Gordon and his wife, Suzanne, raised two of their own children and live in suburban Connecticut.