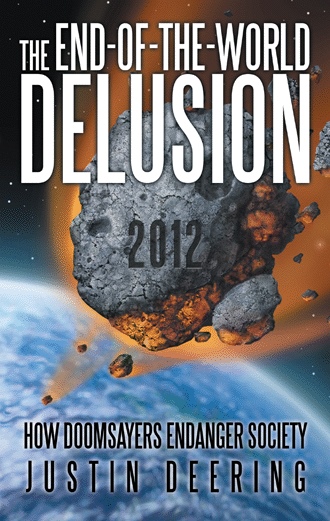 “The End-of-the-World Delusion is a well-written, thoroughly researched, and very readable book. Deering’s lively narrative makes complex and complicated topics accessible to the average reader. He certainly pulled me into his book despite my cynical view of the topic. Deering offers the reader riveting histories of end-of-the world beliefs and covers an extraordinary array of ground in this well-researched book, discussing everything from the Mayan end-of-times predictions, Christian rapture beliefs, pandemics, economic doomsday scenarios, and other apocalyptic predictions.”

—Robert Watson, PhD, author/editor of thirty-four books, including The Presidents’ Wives and America’s War on Terror

People from many different corners of civilization seem to be saying the same thing: the end is near. In The End-of-the-World Delusion, author Justin Deering explores such scenarios, discussing why they are not likely to occur or have any visible impact on this planet within our lifetime.

Providing a thorough analysis, Deering chronicles the numerous instances of such predictions throughout history, examines frequent religious and cultural sources of these end-of-world claims, analyzes the sociological and psychological dynamics and dangers, and outlines other forms of end-times beliefs, ranging from religious to pop culture in nature. The End-of-the-World Delusion provides concrete information that helps evaluate these dubious assertions, relates how such beliefs have harmed individuals and society, and talks about why people are inclined to nurture such beliefs in the first place.

Setting the record straight by detailing the history of failed doomsdays, Deering shows that nothing can be gained by worrying about the end of time, and that we must learn a lesson from the past, live in the present, and plan for the future.

Justin Deering graduated from Lynn University with a degree in business, and is a member of the honor society, Sigma Beta Delta. He worked his way through college as a tutor and has experience in conducting research and presenting it in a logical manner. Deering and his wife, Megan, live in Florida.