A Piazza for Sant'Antonio 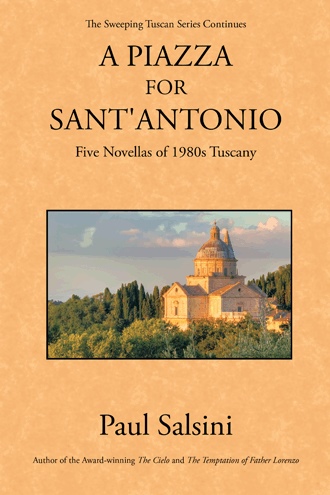 AS SOON AS HE UNTIED the string on the package and saw the cover of the new Scandalo italiano, Mario Leoni knew that the magazine had done it again. Every month, the tabloid used big bold type on its cover to proclaim some terrible new scandal. “The Worst Beaches in Italy!” “Restorante Ripoffs!” “Sex Fiends Are Looking for You!”

“I don’t know how they can print this rag,” Mario said as he arranged the magazines on the shelves of his bottega. “And I don’t know how people can read this stuff. Still, there’s always a line here when a new one comes out so I guess I have to carry it.”

In its short life, Scandalo italiano had quadrupled its circulation with its sensational stories of politicians’ escapades and photo spreads of naked starlets. Not to mention its front-cover “exposés” and its popular Page Three photo of a seminude “Bimbo of the Month.”

Mario paused to take care of a customer. Old Signora Cardineli, accompanied as always by little Pasquale, was buying another cat toy for Alessia.

“Grazie, Signor Leoni,” Pasquale, polite as always, said as he dangled the toy on his finger.

Smiling to himself, Mario placed a half dozen copies of Scandalo italiano between Panorama and Gente Viaggi, but kept one to look at.

“Well, let’s see what the big exposé is this month. ‘Ten Places to Avoid in Italy!’ That should be interesting. It’s on page fourteen.” He flipped through the pages, pausing only a second to see who this month’s “bimbo” was.

He scanned through the article, discovering that the places were in alphabetical order. “Hmmm. Never heard of some of these. Maybe they made them up. They make everything up. Wait! What the hell?”

He held the magazine closer. “Good God!” he whispered, hoping that none of his customers could hear or see him. “This is terrible. How could they do this?”

Mario plucked the other copies of Scandalo italiano from the shelf, kicked them under the counter and ran across the street to Manconi’s meat market with the single copy under his jacket. 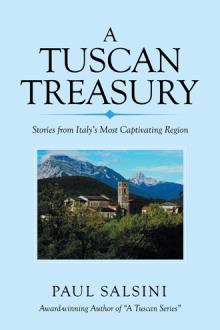 A New Decade, and New Stories

IN PAUL SALSINI’S FIRST NOVEL of this series, The Cielo: A Novel of Wartime Tuscany (first place winner, Council for Wisconsin Writers and Midwest Independent Publishers Association), terrified villagers were trapped in a farmhouse during World War II. In the second, Sparrow’s Revenge: A Novel of Postwar Tuscany, a partisan hunted down the collaborator of a horrific massacre. In the third, Dino’s Story: A Novel of 1960s Tuscany, a boy came of age during the devastating flood of Florence in 1966. Then the characters entered a new decade in The Temptation of Father Lorenzo: Ten Stories of 1970s Tuscany (first place winner, Midwest Independent Publishers Association).

NOW THESE BELOVED CHARACTERS, along with a few new friends and relatives, return in A Piazza for Sant’Antonio, Five Novellas of 1980s Tuscany.

IN THE FIRST STORY, Donna writes a cookbook that makes her famous and threatens her marriage. In another, little Pasquale, in trying to save a cat, teaches the people of his village understanding. When Sant’Antonio is ridiculed because it lacks a piazza, a mysterious man who lives in an abandoned monastery comes to the rescue. Meanwhile, when Dino seeks his roots, he discovers a heroic grandfather, a loving uncle and a doomed village that may be inhabited by ghosts. And in Florence, Father Lorenzo tries to cope with the hysteria brought about by a serial killer of young lovers.

THE SON OF ITALIAN IMMIGRANTS, Paul Salsini received the 2011 Sons of Italy Leonardo da Vinci Award for Excellence in Literature. He is a veteran journalist who teaches writing courses at Marquette University. He and his wife, Barbara, have three children and four grandchildren, and live in Milwaukee with their cat, Bella.