Hello! My Name Is Public School, and I Have an Image Problem 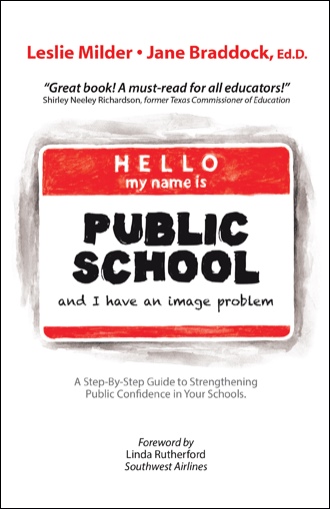 We are blessed beyond measure to live in a land where people are innocent until proven guilty. Well, most people anyway. Seems the malcontents, conspiracy theorists, and the alarmist media have created a shortage in public confidence. With the stroke of a pen or through the lens of a television camera, public school educators are labeled lying, cheating, thieving pedophiles. From school teachers and administrators to school bus drivers and coaches, educators of all walks of life are guilty of something in the eyes of the public. Even when proven innocent there is still lingering suspicion that they got away with it, whatever “it” may be.

The first step in any recovery process is to recognize that we have a problem. In fact, that’s half the battle, many experts say. We cannot address a problem until we have identified that problem, and our public schools have a massive problem. If you believe everything you hear and read about our public schools, you might be thinking they have more than just one problem. Arguments have been made by very intelligent critics, reformers, politicians, and media types that our schools are actually riddled with problems and failing our students. Hollywood is now weighing in with documentaries featuring the plight of our students. Waiting for Superman and The War on Kids are just two of them. Oprah Winfrey has even jumped on the bandwagon that proclaims our public schools as abject failures. And if Oprah says it, it must be true, right? These self-proclaimed experts, reformers, and non-fiction storytellers are even suggesting that our schools are responsible for America’s decline on the world stage.

That brings us back to Step 1 of our recovery plan. Though our public schools have many challenges, we are convinced that most of them are inspired by a single, monumental, colossal, over-arching, yet simple problem – a poor image.

You’ve all read the headlines and heard the rhetoric:

These statements and the mean-spirited, disrespectful debate that surrounds our public schools are all part of the greatest smear campaign in American history. We are by no means conspiracy theorists. We believe Lee Harvey Oswald acted alone. We believe most people, who we call the silent majority in America, are well-intentioned and kind-hearted. It’s the vocal minority, many with their own agendas, who’ve hijacked the debate about public education. Since we started Friends of Texas Public Schools in 2004 we have had quite the education on this subject. Early on we were asked by a journalist if we believed there was an organized effort to undermine public confidence in our schools and the answer at that time was absolutely not. Critics were simply misinformed, so we thought. Our answer today, after many encounters with these critics and reformers, is absolutely yes. Smearing our public schools undermines public confidence in our schools, which makes privatization of our public schools so much more attractive. If our public schools are failing then we should redirect our energies and resources (billions of dollars) toward private options where many in this vocal minority can get a piece of this very large money pie. Also, it’s easy to lay the blame for our social problems in America at the doorsteps of our public schools. The government should be addressing many of our societal problems, not the schools. But since they haven’t addressed them, they’d rather pass that blame onto our schools than take responsibility themselves. When the Russians launched Sputnik, for example, there was widespread panic that America was falling behind. Easy scapegoat for our government was our schools. We simply weren’t preparing students to innovate and compete. Hence, the birth of the crisis in education, first pointed out just 10 years after Sputnik by New York Times education writer Fred Hechinger. “Almost 10 years ago, when the first Soviet Sputnik went into orbit, the schools were blamed for America’s lag in space. Last week, in the Senate, the schools were blamed for the ghetto riots. In each case, the politicians’ motives were suspect. Their reflex reaction, when faced with a national crisis, is to assign guilt to persons with the least power to hit back. The schools, which are nonpolitical but dependent on political purse strings, fill the bill of emergency whipping boy.”2

Our public schools and those who’ve dedicated their lives to serving in them have an unprecedented image problem. Decades of often-times unwarranted criticism, flawed reports and international comparisons have left Americans with the underlying belief that our public schools are not performing well. It has demoralized this profession and left educators feeling unappreciated, which we believe, ironically, has actually slowed the train of progress that our critics and reformers are so hell bent on advancing down the tracks via the laser-like focus on high-stakes testing, which, by the way, does not inspire learning. We wonder how much faster that train would move down the tracks if those working in our schools felt respect and appreciation for their efforts? How much faster would the train be moving if it was fueled with a sense of optimism and hope rather the pessimism and defeatism? If they had the freedoms from reform-driven testing to anticipate and adapt to every child’s learning journey? Hmm…

This underlying belief of poor performance held by many Americans translates into a myth of widespread failure that has provided politicians and reformers the leverage needed to “fix” many of the manufactured problems in our public schools, which has led to a sea of policy and mandates that is drowning educators and making them appear inefficient and as though they cannot stay afloat. The truth is, by all accounts and measurements, our public schools as a whole are one of the most efficient human enterprises in human history. They achieve more with less with each passing year while politicians have the honor of claiming they have not raised taxes and are cutting wasteful spending.

So much energy is focused on what’s wrong with our public schools and how to fix them that we often lose sight of the extraordinary work occurring in our schools every day, thanks to millions of caring, dedicated professional educators who work hard to ensure every student reaches their potential. In Hello! My Name is Public School and I Have an Image Problem, authors and teachers Leslie Milder and Jane Braddock provide a solution for educators who wish to strengthen public confidence in their public schools. They share commonsense techniques on how schools and their employees can establish themselves as ambassadors who convey a positive message. This book enunciates a step-by-step approach to challenging the unjust criticism and accusations of failure by directing the energies of those who work in our schools to step up as ambassadors for America’s public schools and the children they serve. The authors underscore the power of professional unity and its profoundly positive impact on the profession, and why a culture of brotherhood is an essential element of any successful organization. The forces that weaken public trust and confidence in public education are discussed at length, as well as strategies for restoring public pride, hope, optimism, and confidence in our public schools and in those who dedicate their lives to educating our youth.