Finding Meaning in the Place We Live 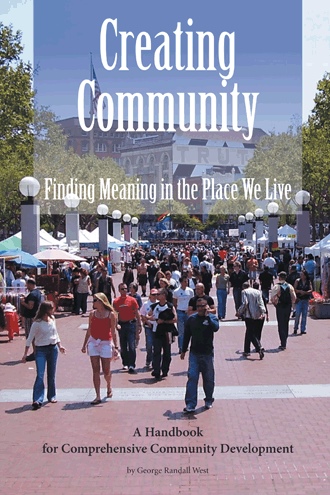 A. Community Storying is ...

B. The Function of Story

1. Birthing 2. Appreciation and affirmation 3. Consensus 4. Honor the past 5. Attack the victim image 6. History-long and worldwide 7. Symbol

When three brick masons were asked, “What are you doing?”, the first one replied, “As you can see, I am laying bricks.” The second answered, “I am earning ten dollars an hour.” The third responded, “I am building a house for the Johnson family.” Each man told a true story. Which man has the more significant and satisfying work? Among the workers on an assembly line making seatbelts, there were some just getting through the day and some earning a living; but one told himself that he was saving lives. The story we tell ourselves about our action defines our self-understanding of what we are doing with the expenditure of our lives.

Hitler’s story proclaimed that the Aryan race was the superior race on the planet and that ended in tragedy for the world and for himself. The fathers of the American Revolution penned a story that announced that all men are created equal with the inalienable right to life, liberty and the pursuit of happiness, and the right to self-government. That story also got them in trouble; but it created a better future than the superior race story. Different stories lead to different actions. We choose our story; and our story creates our future.

Imagine that you are the CEO of a business that lost a lot of money due to mistakes made by a team of four people. You have decided to close that operation but keep one person to fill out a team on a different operation. In an exit interview you ask each why such a mistake was made. The first says, “I am not sure why I did what I did; I guess my colleagues gave me incorrect information.” The second says, “I had no other choice; the circumstances required the decisions we made.” The third says, “My spouse is always putting pressure on me to earn more money; and it caused me to take unnecessary risks.” The last says, “I made a bad call. I am fully responsible. I intend to learn from the mistake.” Which one of the four stories would you keep to place in the new team? We are the story we tell about out actions. Our stories illuminate who we have chosen to be; and then the stories assist in creating who we become.

Edison’s experiments to invent the electric light were many, and at one moment his assistant proclaimed in frustration that they had failed for ump- teen times. Edison’s response was, “No, we have not failed; we now know umpteen different ways that it does not work.” Same events, different story, different perspective, different motivation.

In one urban community there was a seventeen-storey building referred to by all as ‘the old folks home.’ This should have been a rich resource for com- munity formation because there were a lot of retired human beings with time on their hands. But very little interest was shown for working in the community. Looking beneath the inertia, the operating story went some- thing like, “We have been put aside by society to wait for death to take us. We are unwanted and useless to the rest of society.” A new story was suggested, “Elders of society preserve the wisdom of the past that we all need to be effective and creative in solving the issues of the present and future. They are the depository of society’s wisdom.” When the new story took hold, the ‘old folks’ became ‘the elders’ and began to move. Some were instrumental in forming the community security watch in the somewhat dangerous neigh- borhood where the building was located. Others became teachers in the ethnic heritage course for the local preschool and in schools in neighboring communities. Some joined in the community planning for the future of the community. They became a vital force in the community.

The stories we tell about ‘who we are’ and ‘what we do’ create and sustain our awareness of the values we hold and how we value ourselves. That awareness shapes our perception of life and ourselves in general. Our perception shapes all of our feeling, thinking, deciding and acting. A community be- comes the story that the residents choose to tell about themselves. It defines the quality of the community and guides its creation, forming the ‘heart’ of the community.

A. COMMUNITY STORYING IS

... appreciating the wonder and glory that is one’s life and one’s community ... telling the deep, poetic truth about life and the community where one resides ... illuminating the significance of the community to itself and to the world ... artfully embodying one’s self-understanding about life, the values, concerns, hopes, dreams aspirations and intents of a person or a community ... proclaiming the gifts that the community brings to the civilizing process of the planet ... delineating the common values and assumptions that guide community consensus ... bringing self-consciousness to ultimate concerns out of which a community can operate and derive its basic self-understanding ... disclosing a community’s posture toward life ... enabling people to become self-consciously ‘a people’ with a historical awareness ... defining a unique identity for the community ... revealing the meaning of the relationships that make up the community. ... inventing a common purpose for being ... turning matter into spirit.

A vital community always births a unique and meaningful identity. This primarily involves telling a story about what is important and uniquely meaningful about one’s particular community—its gifts, its value, its contribution to the creation of civilization. It is creating a sacred history, a history that honors the expended lives that created the community.

B. THE FUNCTION OF STORY

Story illuminates a reason for being. It defines the common purpose of a community that makes the events of our lives a meaningful journey together and imparts a fullness of life that comes from living in a community infused with meaning and purpose. A journey of meaning deepens the relationships between people, transmuting the stress that arises in living together into significant struggle. It makes living and working in the community meaningful and fulfilling.

The common story animates the community by embodying the ideals, values and beliefs, goals, desires and intentions into a lively, artful story, giving life and vitality to the common self-understanding. It energizes a community. The story enables the community to be true to itself, to live up to its story. A good story releases a flood of motivation and a sense of direction and purpose.

A common story forms a consensus about the defining principles of the community that guides the decisions and actions. In times of stress the story calls us back to the fundamental values upon which the relationships are built and points us toward the future envisioned in the story. The story enables self-conscious awareness of who we wish to be and helps us to choose to be it.

Creating Community: Finding Meaning in the Place We Live.

"This is the book I wish I had when I walked into the west side, inner city of Chicago for my first experience in an intentional effort to create community." — George West"

This is the book we ALL need as community development practitioners. Those on the journey of creating community will find the reflections, stories, and advice extremely valuable. It can be used as an instructional guide, or as a mirror to deepen your own insights and intuitions. Just as this book suggests, development HAS to be bottom up to be most effective. All the people MUST be involved. All the problems DO have to be addressed. Negative operating images that block an individual's or community's self-esteem HAVE to be overcome. George West has outlined great principles, and even better, the practical ways of implementing them shine through in this gem of a book.

The Art of Focused Conversation by R. Brian Stanfield

The Art of Focused Conversation for Schools by Jo Nelson

The Courage To Lead by R. Brian Stanfield

George West lived and worked with the Institute of Cultural Affairs in communities in the inner city of Chicago and in rural villages in Venezuela and Guatemala, helping to establish community development projects in 24 time zones around the world. He was on a team to set up the International Exposition of Rural Development in India in 1984, where community practitioners from sixty nations shared approaches that work. George holds degrees in sociology and theology and an honorary doctorate in public service. He now lives on the pacific coast of Mexico as part of a nine-family experiment in living lightly on the land using solar energy, catching rain water and growing a food forest for local sustainability. He shops in a nearby village riding his four wheel motorbike.