The Place of Knowing 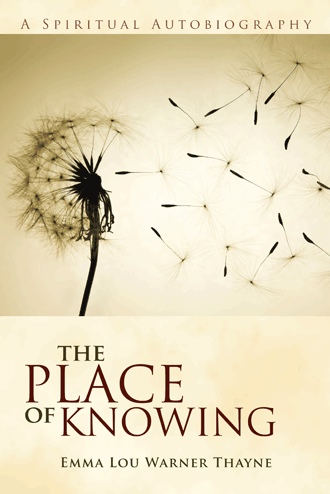 An intriguing spiritual memoir from an unusual woman.

Centered on Thayne’s near-death experience following a car accident when she was in her 60s, this autobiography
contains thematic chapters that explore her changing beliefs about mortality through meditations on family, language and
other daily concepts. As a Mormon grandmother, parts of Thayne’s life—her long marriage, religious devotion and large
family—are seemingly typical for someone of her generation. However, Thayne is also a poet and writer, weaving many
of her poems and other writings into the body of this work. Often, Thayne describes the two roles of homemaker and
author as being at odds with one another, at least within her own mind. In addition to her active, fulfilling involvement in
the Mormon Church, she characterizes her writing life as almost a personal struggle. In a major theme of the book,
Thayne seeks to resolve the internal conflict she feels when torn between her vocation and her concerns about meeting
outside expectations. Interestingly, she addresses this internal conflict by looking both into her Mormon heritage and out
toward other spiritual traditions and lifestyles. Discussing her parents and grandparents, Thayne reveals their warmth and
the absence of doctrinaire beliefs in her childhood home. Her description of “everyday Mormonism” could be compared
to the “women’s Islam” for Muslim writers like Fatima Mernissi and Leila Ahmed. However, in her search for
enlightenment, Thayne isn’t content merely focusing on previous generations of her own family. Instead, she visits
healers, helps bring to light the work of artists with AIDS and recognizes many influences from outside her own
community. As a result, she’s a complex, evolving narrator, grappling slowly with her own expectations and the
challenges of life. Her meditative, fluid narrative might not satisfy readers looking for an eventful, action-oriented story,
but readers interested in the optimistic pursuit of spiritual development shouldn’t miss this one.

Gentle, inclusive ruminations sure to strike a chord.

Emma Lou Warner Thayne is a much-honored and anthologized writer of thirteen books of poetry, essays, and fiction, as well as the hymn, “Where Can I Turn for Peace?” She lives in Salt Lake City, where she has been a pioneer for women in business, education, and the arts.