Why Can’t They See Me? 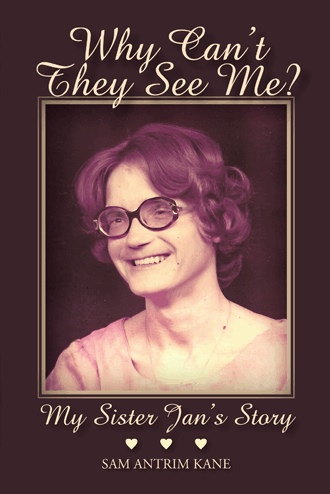 Baby Jan seemed in good health. She took a breath and cried as soon as she was delivered. But she didn’t nurse very well that week in the hospital and lost weight from 6# 6 to 5# 9 oz before going home. Even after going home she would not nurse. One night Mom gave her a bottle and she took it. That did it Mom decided to put her on the bottle instead of nursing her. That was probably the only bottle she ever took without having to be coaxed and encouraged to eat. Jan could not lift and control her head until she was ten months old. Shortly after learning to control her head she learned to sit up. At fourteen months of age mom and dad were sensing changes in Jan. She was being clumsy and rubbing her eyes a lot. She developed something on the cornea of her left eye, which looked like mucus, but when mom tried to clean it off it did not move. She was referred to Iowa University Hospital in Iowa City, Iowa where she was diagnosed as having no blink reflex or tears, which dried her eyes out and she developed an ulcer on the cornea of her left eye. The ophthalmologist did surgery to remove the ulcer, and partially sewed her eye shut so it would not dry out causing the ulcer to get worse. He put an eye patch over her eye for protection. They kept her in the hospital for a week and referred her to the Pediatric department for neurological exams. They learned she did not have ability to chew. She would wallow her food around in her mouth until it was soft enough to swallow. She was diagnosed as having Rielly-Dey Syndrome (RDS). This was a disease that infants were born with and most children with Rielly-Dey did not live very long as it affects all organs; lungs, kidneys, bladder, colon, vision, liver, etc. The doctors did not think Jan would live to be a teenager. Jan’s vision was affected to that of being legally blind although mom and dad were never told this until she was 18 years old. She made no tears until age three, and then they were not of sufficient quantity. In 1970 a doctor at Mercy Hospital in San Diego, California, the world renown on RDS did tests and determined Jan did not have the true Rielly-Dey syndrome. He said physical indications reveal she has Rielly-Dey, the lack of pain sensation, thin tight lips, unable to hold her head up at the usual age, no sucking instinct, etc. But the tests, 72 hour urine and blood test were slightly indicative but not at the level for a true diagnosis. Jan always achieved whatever Linda and I did, even though it seemed Jan was accident prone due to her vision, poor balance and coordination. She had many falls and accidents, but she kept on doing what we did.

AuthorSam Antrim Kane was born the middle of two sisters. He has a sweet loving wife, five children and five grandchildren. In 2004 the family lost uncles and aunts to cancer, cousins, nephews, and nieces to drunk driving and suicide. Sam started writing a “Family Ministries” letter to help families realize they are not alone. He felt the family should have been there to help comfort and support those that were hurting. God continues to inspire him to write these letters each month and mail them out to over 100 family and friends.

After his sister Jan died he began writing this book about her and all the struggles, hardships, and bullying that she went through. Everyone no matter who you are just wants to be seen. There is lots of deceptions people use just to be seen such as education, drugs, alcohol, and money.

Sam Antrim Kane was the middle child in his family, with an older sister and a younger sister. In 2004, after a series of family tragedies, Sam started writing a “Family Ministries” letter to help others realize they are not alone. God continues to inspire him to write these letters each month and mail them to over one hundred family and friends. Sam is blessed with a loving wife, five children, and five grandchildren.