One Widow’s Story about Living beyond Grief 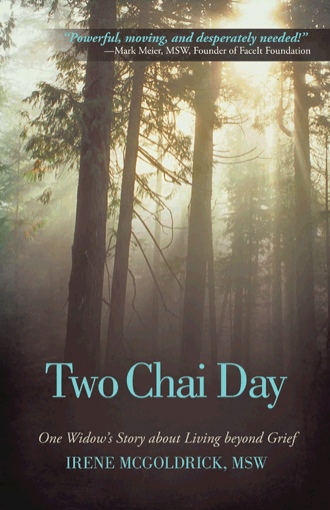 Arthur and I were in the car waiting for Henry to get out of his kindergarten class. The minivans and SUVs were lined up obediently. Henry was ushered out of the brick building, his eyes toward the ground he nodded almost imperceptibly to the teacher as she complimented him on his hard work for the day. He got in the car, placed his canvas school bag on the seat next to him, buckled himself up and leaned over to his brother. “Arthur, when are you going to start using the toilet?” he asked. “When my daddy gets back.” Arthur answered. “Arthur, Daddy’s dead. It makes us all sad. And I still cry about it sometimes, but he is on Dog Mountain now. And also in the dining room ― in that thing on the shelf ― you know. So he isn’t coming back, Arthur. But you still have to use the toilet.” Arthur answered simply, “I know, Henry.” I glanced in the rear view mirror and saw two blonde heads leaning towards each other. Both sets of blue eyes gazed out their own window. Henry sounded so serious and thoughtful, as if he had been thinking about the conversation for days and had chosen his words carefully, just as his dad once had. At the time Henry shared this straightforward bit of advice with his younger brother, he was six years old. Arthur was three and their dad had been dead almost three years. Their dad, my husband, died early in the morning on March 29, 2004. This is our story.

“Told in a raw, non-sentimental voice that is both believable and authentic. This book oﬀers a ray of hope that although grief has many faces and moods, a journey through it does not necessarily mean a life sentence of sadness.”
—Abigail Carter, author of The Alchemy of Loss

Irene McGoldrick had a premonition in late 2002. Just out of the shower, she stood on the second ﬂoor landing of her home and watched her husband of nine years whisper good night to her toddler son. “Remember this moment, remember right now.” The haunting words seeped into her consciousness like a slow, rolling fog—“this won’t last.”

Irene and Bob were living an ordinary life a few months later when a cancer diagnosis shook their world to its core. Through poignant anecdotes that detail the young family’s journey through Bob’s illness—one that takes them to both extreme and alternative measures—Irene weaves an unforgettable narrative inspired by Bob’s journal entries and her own honest storytelling that is heartbreaking, and at times, comical. Eventually forced into widowhood at age thirty-six, Irene shares how she reluctantly embraced single parenthood and began her march through mourning, determined to embrace her grief with intention.

Two Chai Day is a compelling true story about embracing love and loss, realizing there can be laughter in the midst of sadness, and learning to appreciate the ambiguity of life.

Irene McGoldrick became a widow and single parent at thirty-six. She is a social worker, speaker, massage therapist, and essential oil expert who hopes that her story will encourage others to successfully live beyond grief. She lives in Wauwatosa, Wisconsin, with her second husband, two sons, and three stepchildren.