Loneliness in Philosophy, Psychology, and Literature 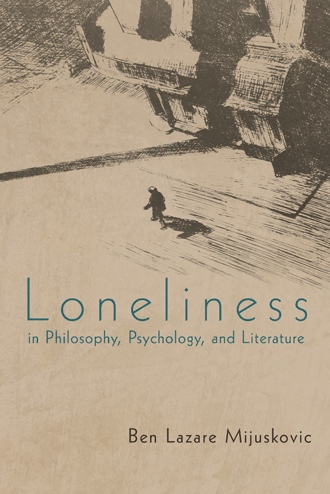 “This book is great for psychology, philosophy, and literature students, professors, and anyone who truly wants to understand the meaning of the three disciplines. Just to let the reader know, I really think everyone should read this book and as you can tell from my detailed review I learned a lot and really did like the book.” - Fran Lewis, Gabina49’s Reviews

“I absolutely loved reading this book, I actually read it twice, and I have cited Mijuskovic’s theory and speculation in at least two research papers regarding the human psyche and social interactions. It’s a curious topic and the text is incredibly fascinating.”- Ashley Lamar, Closed the Cover

“Loneliness in Philosophy, Psychology, and Literature is a deep and extremely thoughtful work with excellent footnotes, references and appendixes. This is not a work for the casual reader and is recommended for college and university library collections. Mijuskovic is a scholar and a serious writer and the book shows his seriousness and depth of knowledge. It is a brilliant work of research and its learned presence will be welcome wherever scholars are present.” - Alice DiNizo, Reader’s Favorite

“This book is great for psychology, philosophy and literature students and professors and anyone who wants to truly understand the meaning of Loneliness and connect them to the three disciplines. Just to let the reader know, I really think everyone should read this book and as you can tell from my detailed review I learned a lot and really did like the book.” (Gabina49’s Blog, 11/6/2012)

“Focusing on the concept of loneliness and how it is reflected throughout our culture and history, touching on what it truly means to be alone, Loneliness is a must for those who want another perspective on the idea of solitude in Philosophy and Literature.” (Midwest Book Review, August, 2012)

“Existential isolation cuts beneath other forms of isolation. No matter how closely we relate to another individual, there remains a final unbridgeable gap. Each of us enters into existence alone  and must depart from it alone. Each individual since the dawn of consciousness created a primary self (transcendental ego) by permitting consciousness to curl back upon itself and to differentiate a self from the remainder of the world. Only after that does the individual, now ‘self-conscious,’ begin to constitute other selves. Beneath this act, Mijuskovic (1979) notes, there is a fundamental loneliness; the individual cannot escape the knowledge that (1) he constitutes others and (2) he can never fully share his consciousness with others.” —Rollo May and Irvin Yalom in Current Psychotherapies, edited by Raymond Corsini

“Loneliness in its existential form was also furnished major momentum by forerunners of existentialism itself, such as Kierkegaard and Nietzsche, themselves two self-confessed utterly lonely individuals. Far more recently and in the United States, William Saddler (1978) and Ben Mijuskovic (1979; 1980) pioneered philosophical studies on, respectively, loneliness and what I reference as aloneliness and both did so from phenomenological and interdisciplinary perspectives as well.” —John G. McGraw in Intimacy and Isolation

“Bracketed with earlier writings, which it incorporates, this study draws together the results of an extensive reconceptualization of human culture and self-image. Mijuskovic’s new root-metaphor hinges on the idea of the person ‘in desperate isolation.’ That is his intuition. For a decade he has been researching and redescribing the position as it appeared to him in philosophy, psychology, and literature. Loneliness is for him a condition to be acknowledged—in art or social science. Escape via friendship or other dimensions is all one can hope for—escape into forgetfulness of the given condition … Recommended for college and university libraries and, perversely but realistically, also for theological libraries with a concern for how the other (intellectual) half lives. Extensive, entertaining footnotes.”  — Choice

“The thesis of Mijuskovic’s study is that the central motive of human conduct is the fear of aloneness. Individuals seek the companionship of others, join in social life, and create cultural works most fundamentally as a flight from the experience of loneliness. He presents an ‘image of man as intrinsically alone and irredeemably lost, man as continually struggling to escape the solipsistic prison of his frightening solitude.’ Mijuskovic attempts to establish a conception of monadic consciousness that will explain and illuminate the sources and manifestations of human loneliness. The book presents the above thesis through discussions of the theme of loneliness in the works of such authors as Descartes, Kant, Husserl, Sartre [in philosophy], Defoe, Dostoyevsky, Conrad [in literature] and Freud and Lang [in psychology]. One of the great tasks facing this new field of study is the exploration of how emotional experience infiltrates and colors creative works in various intellectual domains. Products of literature, psychology, and philosophy may be studied not only in their explicit contexts, but also in terms of how they may embody metaphorical symbols of personal subjectivity. From this perspective, to take just one of several possible examples, Mijuskovic’s discussions allow us to perceive a close kinship between the image of Robinson Crusoe in Daniel Defoe’s classic, R. D. Laing’s conception of the inner true self, and the idea of the transcendental ego in the philosophy of Edmund Husserl. Each of these representations may be viewed as symbolizing an experience of the self’s solitude, arising from the personal world of its creator and taking a form that awakens wide resonance in the community at large. In developing the position that man’s essential (metaphysical) nature is to be alone, Mijuskovic equates the concept of man’s separateness with that of his alienation and solitude. For Mijuskovic, being separate means being alone and alienated; the possibility of a life clearly separate but existing in underived mutuality with other lives seems not to exist in the world he describes. Love, mutuality, and companionship are in his view ‘ontologically secondary’ (and ultimately futile) efforts to escape the fundamental solitude of the human condition. The book may also be read as a fascinating document of loneliness, for no author would focus so single-mindedly on this emotion unless he had himself experienced it at a deep level. If it is assumed that what Mijuskovic claims regarding cultural products in general holds true of his own work in particular, then his book must itself be seen as an example of the fl ight from lonely isolation. How does his intellectual project accomplish this fl ight? I would suggest that by locating loneliness in the heart of universal human nature, he has transformed the feeling of alienated solitude into the most deeply shared of all human experience.” —George E. Atwood in “All Men Are Together in Their Loneliness,”  Contemporary Psychology

Drawing on the fields of psychology, literature, and philosophy, Loneliness in Philosophy, Psychology, and Literature argues that loneliness has been the universal concern of mankind since the Greek myths and dramas, the dialogues of Plato, and the treatises of Aristotle.

Author Ben Lazare Mijuskovic, whose insights are culled from both his theoretical studies and his practical experiences, contends that loneliness has constituted a universal theme of Western thought from the Hellenic age into the contemporary period. In Loneliness in Philosophy, Psychology, and Literature, he shows how man has always felt alone and that the meaning of man is loneliness.

Presenting both a discussion and a philosophical inquiry into the nature of loneliness, Mijuskovic cites examples from more than one hundred writers on loneliness, including Erich Fromm, Frieda Fromm-Reichmann, Clark Moustakas, Rollo May, and James Howard in psychology; Thomas Hardy, Joseph Conrad, James Joyce, Thomas Wolfe and William Golding in literature; and Descartes, Kant, Kierkegaard, Nietzsche, and Sartre in philosophy.

Insightful and comprehensive, Loneliness in Philosophy, Psychology, and Literature demonstrates that loneliness is the basic nature of humans and is an unavoidable condition that all must face.

Ben Lazare Mijuskovic offers in his book a very different approach to loneliness. According to him, far from being an occasional or temporary phenomenon, loneliness—or better the fear of loneliness—is the strongest motivational drive in human beings. He argues that “following the replenishment of air, water, nourishment, and sleep, the most insistent and immediate necessity is man desire to escape his loneliness,” to avoid the feeling of existential, human isolation” (p xxx). The Leibnizian image of the monad—as a self-enclosed “windowless” being—gives an acute portrait of this oppressive prison. To support this thesis, Mijuskovic uses an interdisciplinary approach--philosophy, psychology, and literature—through which the “picture of man as continually fighting to escape the quasi-solipsistic prison of his frightening solitude” reverberates.

Besides insisting on the primacy of our human concern to struggle with the spectre of loneliness, Mijuskovic has sought to account for the reasons why this is the case. The core of his argumentation relies on a theory of consciousness. In Western thought three dominant models can be distinguished: (a) the self-consciousness or reflexive model; (b) the empirical or behavioral model; and (c) the intentional or phenomenological model. According to the last two models, it is difficult, if not inconceivable, to understand how loneliness is even possible. Only the theory that attributes a reflexive nature to the powers of the mind can adequately explain loneliness. The very constitution of our consciousness determines our confinement. “When a human being successfully ‘reflects’ on his self, reflexively captures his own intrinsically unique situation, he grasps (self-consciously) the nothingness of his existence as a ‘transcendental condition’—universal, necessary (a priori—structuring his entire being-in-the-world. This originary level of recognition is the ground-source for his sensory-cognitive awareness of loneliness” (p. 13). Silvana Mandolesi

Ben Lazare Mijuskovic earned a master’s degree in comparative literature and a PhD in philosophy; he is a licensed clinical therapist. He currently teaches in the philosophy and humanities departments at California State University, Dominguez Hills. He is also the author of The Achilles of Rationalist Arguments and Contingent Immaterialism, as well as numerous scholarly articles.