The Truth About Air America and the CIA 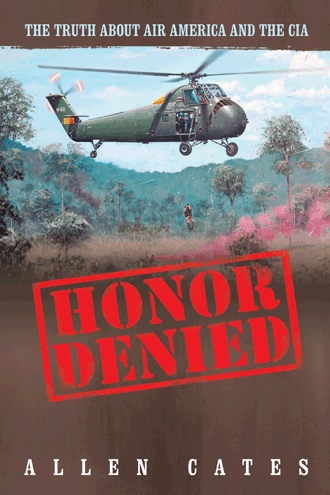 Air America flight crews, hired as civilians, but castigated as mercenaries, malcontents, and psychopaths, operated military aircraft and performed yeoman service for twenty-five years until the war in Southeast Asia ended on a rooftop in downtown Saigon. They have never been recognized for their sacrifices.

Author and former Air America pilot Allen Cates cuts through the myths and subterfuge surrounding this elite stealth Air Force used by the United States to fight a secret war in Honor Denied. The culmination of Cates’s years as a pilot and his in-depth research into Air America’s murky past, this intense study follows his escape from rural, small-town America to the US Marines, as well as his time as an officer and pilot flying combat operations in Vietnam and rescue missions for Air America.

Peppering the narrative with vivid personal details, Cates describes the background and purpose of this unique organization and then discloses the startling casualties—both those killed in action and those wounded and injured with permanent disability. He shines the light on their cause, long hidden from the general public, and reveals how these brave men and women were denied recognition and benefits by those who knew the truth, including the US President, secretaries of state and defense, and even the director of the CIA.

Proud, yet never boastful, Honor Denied tells a story that needs to be told—and heard.

Allen Cates is a certified project manager professional and former Air America pilot. He conducted research on the history of Air America for five years and has written several articles on the subject. This is his first book based on that research.