Essays on Life, Love, and Why Growing Up Is So Hard to Do 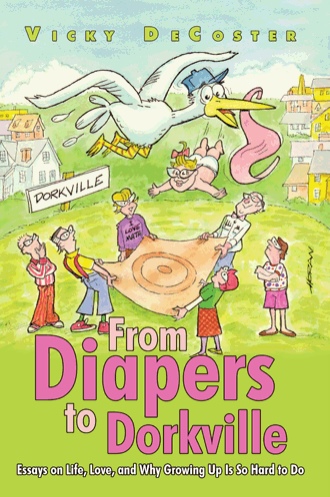 The annual Presidential Fitness Test at my elementary school was always preceded with a feeling of dread that completely overtook my spindly little body. The pressure to perform athletic feats I was clearly incapable of completing was tremendous. Skinny and weak, I was barely able to pass the jump roping and squat thrust portions of gym class, let alone do fifty sit-ups followed by thirty push-ups proceeded by ten chin-ups. I obviously had talents in other areas that required a high level of skill and athletic ability. Unfortunately, my gym teacher, whom I’ll call “Mr. Buff,” had no idea that I was the only one at my lunch table who could eat a peanut butter sandwich in three bites and not require the principal to perform the Heimlich maneuver. Now that took talent. On the morning of the Presidential Fitness Test, I ate a bowl of Wheaties for breakfast with the hope that I would suddenly turn into one of the Olympic athletes featured on the box. In a courageous attempt to prove my athletic strength, I even tried to beat up my little sister after breakfast. No such luck. She flipped me on my back in a move unknown to anyone other than professional wrestlers and quickly defeated me with the scissor hold. There was no question in my mind—I was doomed to fail. A few hours later, I lay on the hard gym floor. My lips moved in silent prayer while another student held my feet. Mr. Buff blew his whistle. I quickly glanced around. All my classmates were doing sit-ups like they were in Marine boot camp. The boy who held my feet yelled, “Come on, whassa matter?” If only he knew. Still, I crossed my arms over my chest, counted to three, and gave it my best shot. My face turned red, my cheeks puffed up with air, my neck veins popped out, and I managed to sit up … once. The whistle blew again. Everyone flipped over like pancakes and began doing push-ups. I made it halfway down before my arms started shaking uncontrollably. Three seconds later, I face-planted on a floor that smelled like a cross between dirty gym socks and rubber tires. The whistle blew one final time. Now, I knew deep inside that I wasn’t the best at sit-ups and push-ups, but if there was one thing I was sure of back then, it was that I was horrible at chin-ups. Mr. Buff motioned me under the bar. “Jump up,” he instructed. I jumped up and hung on for dear life. “Pull yourself up and put your chin on the bar!” he shouted from below. Easy for him to say. He had arms like Popeye. I had arms like Twiggy. I hung and I hung and I hung some more without doing a thing until it was time to hand out the medals. Mr. Buff helped me down. “Maybe next year, kid,” he said with unrealistic optimism as he handed me my cardboard “Participant Medal.” As I watched all the other kids receive their shiny gold “Presidential Medals,” I felt crushed, defeated, and not strong at all. It was just a few years later that I learned it is not nearly as important how strong you are on the outside as it is to be strong on the inside. As I endured everyday challenges that tested not only my inner-strength but also my endurance, I came to fully relate with Eleanor Roosevelt who once said, “A woman is like a tea bag. You never know how strong she is until she gets in hot water.” I never could do a chin-up, but that’s okay. In the end, I learned that it’s more important to hang on for dear life and enjoy the ride. 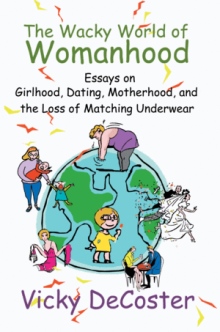 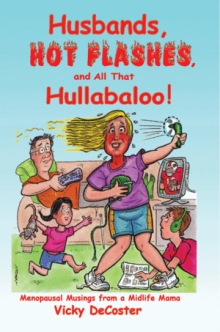 HUSBANDS, HOT FLASHES, AND ALL THAT HULLABALOO!
Vicky DeCoster
$15.95

We've all had one, whether we like it or not. No, it's not a bad date, a pimple that will not go away, or an annoying mother-in-law. It's a childhood. Who hasn't hung helplessly from the chin-up bar in grade school during the annual Presidential Fitness Test or magically transformed into a forensic pathologist during a frog dissection in seventh grade biology class or, worse yet, endured an uncomfortable birds and bees lesson from their parents? In her third book in the Wacky Womanhood series, Vicky DeCoster shares her latest compilation of hilarious essays that look back to a simpler time when trying new things was a way of life; bullies ruled like kings; and parents reveled in torturing tiny versions of themselves. As DeCoster recalls her side-splitting childhood, she also shares inspirational life lessons learned along the way, encouraging others to look at their own youth in a completely different way. From Diapers to Dorkville offers a refreshingly wicked glimpse into one girl's true adventures and shares how she somehow survived long enough to sashay her way straight into the wacky world of womanhood. ForeWord Clarion Book Review

Award-winning humor writer Vicky DeCoster is the author of Husbands, Hot Flashes, and All That Hullabaloo! and The Wacky World of Womanhood. Her work has been published in over sixty magazines, books, and on several websites including thespiritedwoman.com, where she regularly blogs. She lives in Nebraska with her family.