Make the Noise Go Away

The Power of an Effective Second-in-Command 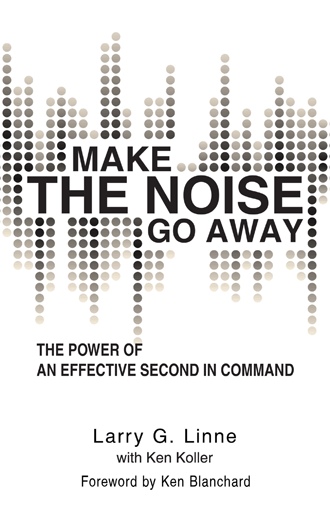 “How about right after the first year I’d been at Golden. It was in January and you had just returned from another one of those classes where you brought back a ton of new ideas. You know, the electrical contractors conference where everyone in the company used to be terrified knowing you were there. They just knew you would come back with tons of ideas we would never be able to implement.” Jim didn’t seem amused but he knew exactly what Brett was talking about. Brett continued. “So, you called me into your office where you had compiled what appeared to be a tower of paper. You informed me that we were going to sort through the two-foot stack of ideas to choose which ones I would implement. That’s when I had an idea. I distracted you to go get your organizer so we could start. While you were gone, I took three pieces of paper and wrote one word in large print on each of them: “NOW,” “NO” and “LATER.” They were side by side on the table when you came back into the room. I informed you that we would go through your stack of great ideas and place them in three piles according to the three different priorities.” “The criteria used to determine which pile the idea went into was based on the following: if the item met our immediate needs, followed our strategic direction, and would give us an acceptable renturn on investment, we would place it in the “NOW” file. I would be responsible for making sure the items in this pile were immediately moved forward into action items. If the item was a great idea but should be executed at a later date, we placed it in the “LATER” file. I would place those items in a file to review at our annual strategic planning session. If the item did not meet our needs, was outside of our company direction, or would not give us an acceptable ROI, it would go in the “NO” file. That file would be placed in the trash before we left the conference room. Of course, you had to lighten up things and be cute, even though you knew the idea was a brilliant way to get things off your plate and out of that cabinet behind your desk. You directed me to retrieve some markers from the other room. Nice distraction, by the way. … so that we could write on the papers. When I returned, you had placed all three pages upside down in one pile and had written, “YES SIR! RIGHT AWAY SIR” on the top page. Then added, ‘this is how I would like to proceed with the project.’” “Any of this ring a bell?” Jim was laughing out loud at this point. “I had forgotten all about that little incident. I’m a pretty funny guy aren’t I? “Yes, just hilarious”, Brett responded back with all the sarcasm he could muster. “But, despite your being so funny, we uncovered why most of your ideas never got off the ground. You lacked follow-through and follow-up. You thought that if you had ideas and shared them with others in the organization, then those ideas would somehow get executed. Reality was, you had great ideas, communicated them and nothing happened. More importantly, you thought they were being implemented but they weren’t.” “The other issue that I saw when I first came here was the randomness of what was being implemented. We were taking on ideas as they came to us versus being purposeful and consistent with our strategic plan. When we developed a clear vision and were strategic about how we would get there, we were able to filter new ideas against these plans.” Jim leaped out of his chair with disgust.

Many entrepreneurs embrace the challenge of being their own boss; they desire freedom—both financial and temporal. But, often, the business consumes both time and money and ends up owning the owner. In Make the Noise Go Away, author Larry G. Linne discusses thirteen principles to help business owners reclaim their freedom.

Written in parable style, Make the Noise Go Away follows business owner Jim Clancy and second-in-command Brett Giles at Golden Electric Supply. During a weekend retreat at a quiet mountain cabin, the two executives discuss the principles and strategies that make Jim’s noise—all the worries and concerns about his business—go away and allow Brett’s job to be more enjoyable and successful. They talk about important skills and concepts such as maintaining upward communication, setting priorities, practicing effective problem solving, and introducing new ideas.

Targeted to both first- and second-in-commands, Make the Noise Go Away provides insights on decision-making skills, methods to protect and nurture great CEO ideas, and strategies for managing the perception of the business by important third parties. With concrete takeaways and tools for implementation, this guide helps clear the way for productivity and success for today’s business executives and their seconds-in-command.

Larry G. Linne has a diverse background that ranges from professional athlete to current partner and CEO of Sitkins Group, Inc. A consultant, coach, and keynote speaker, Linne is the CEO of Intellectual Innovations LLC. He lives in Fort Collins, Colorado, with his wife, Deborah, and their five daughters.

Ken Koller attended The Johns Hopkins University in Baltimore, Maryland, where he obtained his certificate in business management in 1970 and a bachelor of science degree in 1973. His most recent experiences as both first in command and second in command have provided great insight into how these important relationships are established and refined to achieve improved performance and organizational success. Ken continues his business consulting practice as principal of Koller Associates.