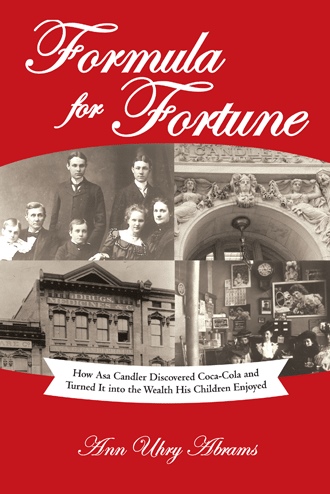 Asa Candler rose from a rural background to reap a fortune. His windfall came from purchasing the Coca-Cola formula in 1888 and establishing the company that became a national phenomenon in less than a decade. In Formula for Fortune, author Ann Uhry Abrams narrates the life and times of Candler—from his ancestral background to the death of the last of his five children.

Formula for Fortune not only shows how he turned his entrepreneurial genius into an empire, but also relates his status in Atlanta, Georgia, as a prominent banker, realtor, philanthropist, civil servant, and mayor.

Painting a lively portrait of the past, this biography tells a fascinating American story that covers a century of American and Southern life as seen through the eyes of a middle-class family elevated to prominence by their patriarch’s incredible success. It not only provides a peek into the horse-and-buggy days of one of the nation’s major corporations, but also follows Coca-Cola’s fascinating transformation from patent-medicine to international phenomenon. Family dynamics weave through this drama of love, disappointments, and disaster played out against the background of four wars, a race riot, technological revolutions, and numerous courtroom dramas.

Ann Uhry Abrams authored three previous books. She earned a BA and MA in history from Georgia State University and a doctorate from Emory University. Abrams has taught at colleges and universities and has served as a curator. She lectures about local history in the Atlanta, Georgia, area.