A History of Grammar Teaching in Canada, New Zealand, and Australia, 1800–2000 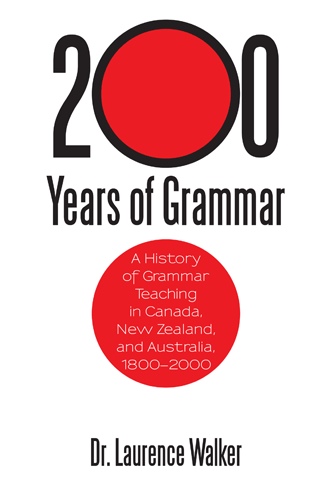 Since 1800, students have spent millions of hours learning English grammar. Students and teachers have toiled at parsing and analysis, dreading the English exam at the end of the year, as debate over the real value of learning grammar has raged. Nowhere have these arguments been as passionate as in the English-speaking colonies of Canada, New Zealand, and Australia.

In 200 Years of Grammar, author Dr. Laurence Walker narrates a detailed history of the origins and evolution of grammar education and its relationship to English usage in Canada, New Zealand, and Australia. Walker presents a discussion of grammar’s educational signiﬁcance and provides a framework for how the context of the politics surrounding grammar teaching aﬀects students and teachers.

Oﬀering many applicable examples, 200 Years of Grammar gives insight into the issues with which English teachers around the world have grappled for years. It provides teachers, students, and those interested in the English language with an engaging history of grammar education from the introduction of state curriculum through to the twenty-ﬁrst century.

Dr. Laurence Walker is a professor emeritus at the University of Lethbridge in Alberta. For over forty years, he has been interested in the education of teachers, and his research has taken him to New Zealand, Australia, and Kosovo. Visit him online at www.canadiangrammar.com.