The Puzzling Story of the Pfanschmidt Murders and of the Surviving Son—Victim or Villain? 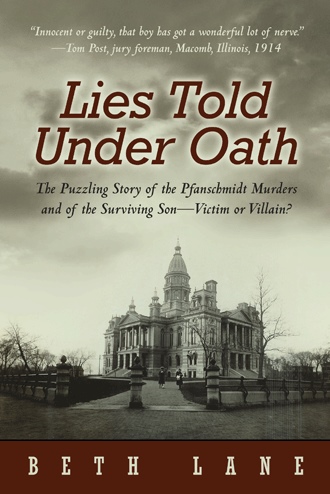 The peaceful Illinois prairie kept deadly secrets that autumn Saturday. A white-frame farmhouse sat silently, concealed by its orchard. Chickens lazily scratched the dirt in the garden, and the leaves of carefully tended fruit trees stirred in an erratic breeze. Horses stomped and whickered in the barn but could not be heard from the nearby road. Neither the lively Pfanschmidt family, who owned and tended the place, nor their boarder, the new schoolteacher, was anywhere to be seen.

It appeared to early morning passersby that the family had gone to the city for the day.

Just a mile down the road, a little rock building known as Hibner School also rested silently, locked and shuttered at the edge of the fields as the buggy of mail carrier William Long clopped by. The stone walls of the one-room school drank in the pale sunshine; the wood stove, cold and still, awaited the teacher’s match come Monday.

Mr. Long thought about the newly hired teacher, Emma Kaempen, and wondered how the plain-faced young city woman would fare in the country. Usually on Saturday mornings, Miss Kaempen arranged to make the hour and a half ride back to her family on the Payson/Quincy stagecoach. Or sometimes she would tie a rag on the mailbox and the neighboring farmer, Mr. Kaufman, would stop for her on his way to deliver his eggs and butter to the Quincy stores. That thirteen-mile journey spanned more than miles; it crossed boundaries of attitude and culture.

At the Pfanschmidt farm on this fall morning there was no flag on the mailbox, so the neighbor went on his way without stopping.

Mailman Long left the newspaper in the box by the road, since no one was waiting to gather it. Neither blonde, pretty Blanche nor her smiling mother, Mathilda, was there. There was no friendly wave from Blanche’s father, Charles, usually hard at work in the fields. Mr. Long didn’t expect to see the only other member of the family, a grown son named Ray, who worked in town.

All day the empty windows of the two-story farm house gazed blankly toward the road. There was, however, an odd odor tossed about by the unpredictable breeze. Woodcutter Roy Peter, passing the farm about 7:00 a.m., thought someone might have disposed of cholera hogs. This dreadful disease had been about the area recently, and the only sure way to stop its spread was to burn the diseased carcasses. Whatever the source, the smell was decidedly unpleasant.

That day, the neighbor’s son, Gus Kaufman, chopped corn and cut weeds up near the Payson Road, just a hundred yards from the Pfanschmidt home. He saw only a quiet, peaceful farm. It was an uneventful day for him, the last such for a long time.

As the light wind changed direction, rippling the corn stalks in the fields, the nose-wrinkling smell appeared and dissipated, never revealing its source. Toward sunset, when the damp air quieted the breeze and made all odors more distinctive, the stench grew stronger. At least that’s how it seemed to neighbor Peter as he made his return trip past the farm that evening.

Later still, about ten o’clock, a little shower settled the dust on the roads before the darkened farmhouse.

In 1912, a prosperous Illinois farm family—Charles; his wife, Mathilda; their fifteen-year-old daughter, Blanche; and boarding schoolteacher Emma Kaempen—were brutally murdered, the crime concealed by arson, and the family’s surviving son, handsome Ray Pfanschmidt, arrested. He was convicted by the press long before trial. In Lies Told Under Oath, author Beth Lane retells the story of the murders, the trial, the verdict, and the aftermath.

Using information culled from actual trial transcripts and newspaper accounts, Lane presents the day-to-day testimony as Ray’s battle for his life surged through three courtrooms—the drama complicated by brilliant attorneys, allegations of perjury, charges of rigged evidence, jailhouse informants, legal loopholes, conflict over the large estate being inherited by the alleged murderer, and appeals to the state supreme court. The remaining family became divided over Ray’s guilt while his fiancée staunchly stood by him.

Lies Told Under Oath provides a fascinating, historical account of the times and the people—when science was in its infancy, telephones meant shared party lines, bloody evidence was contested (or contrived), and automobiles competed with bloodhounds and buggies. It captures the essence of an emotional crime that rocked this small Illinois community.

Beth Lane is a retired businesswoman who grew up near the scene of the murders. The local legends became personal when her great-grandfather’s name was tied to the trial. After years of research, the story is now told. Lane lives in the southwest.

For more information visit her on the web:
www.liestoldunderoath.com or
www.bethlanewrites.com