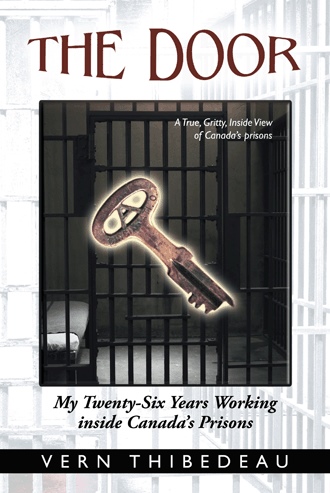 BANG! I knew it was a starter’s pistol and the son of a bitch wasn’t going to pull that crap on me. I had had my right leg braced to jump the two of them and I was all set to take that leap. As soon as he fired, he spun around and pointed that pistol at me, and that’s when I realized it had ejected an empty casing. I knew starting pistols don’t eject casings. In the same split second, I remembered seeing a small hole in the windshield that hadn’t been there earlier. At the same time I looked into that barrel and suddenly it looked ominously huge and my mind screamed, Christ All Mighty I’m going to be dead—that’s no starter’s pistol! I was just letting my leg relax when he screamed, “Sit the fuck down or you’re a dead man!” Believe me, I sat. I still didn’t know if he had shot Arnie or not; thankfully, he hadn’t. But he had fired close enough to cause him to have powder burns on his cheek. So, there we were: a driver, three correctional officers, six or seven convicts, one of which had a handgun, and we didn’t know what else or who else might have been involved. And none of the inmates even had restraint equipment on—not that it would have helped. It didn’t take a lot of brainwork to figure out that we were in a hell of a lot of trouble. For the next few seconds, which seemed like several minutes, I watched the inmates. I wasn’t sure if something else was going to happen or if any of the other cons were involved. At the same time, I tried to watch the traffic. I still expected a car to pull up and one or more inmates to leap out of the van and jump into it. You could say I was a little concerned; actually I was scared witless. If any inmates did jump into another vehicle, they would have to keep us quiet somehow so they could get away. I just couldn’t visualize escapees jumping into a car and merrily waving goodbye as they drove off. They would realize that all we had to do, once they were gone was step out and wave someone down. And I’ve never said inmates are that dumb. Maybe impulsive, macho, greedy, and some full of hate, but not usually that dumb. These thoughts only took a split second to process, but as soon as Hein started waving that pistol around and screaming at the driver to keep going straight up the highway, I knew there was no vehicle coming—at least not yet. And that, I thought, was good for us; at least for now. He ordered the driver to keep going and Arnie to stay in the seat beside the driver. He ordered Ron to stay behind the driver and for me to get my ass up beside Ron. He also advised me to be very very careful and not do anything stupid. Hein stated in no uncertain terms that he had a lot of time left to do and there was no fucking way he was going back in. I can assure you I was very careful moving up to the front! But at the same time I was starting to get very pissed off, and I really wanted to make a grab for that handgun and wrap it around his head. I think I could have managed it, because he wasn’t much bigger than me, but I still didn’t know if he was the only con involved. I also knew that if I did grab it and someone jumped on my back or if anyone got shot, there would be hell to pay. And the way things seemed to work, there would be a lot more hell raised if it was an inmate that was injured or killed. So, I just eased up to the front of the van and plopped down beside Ron. As soon as I sat down, the son of a bitch put the gun up to my head and in a very quiet but deadly voice said; “Don’t do any screwing around Thibedeau or somebody will be fucked and it sure as hell won’t be me!” Once I cooled down a little I thought, Jesus Christ, less than two years in the Service and I’m fucked again! I tried to recall of how much life insurance I had and desperately wished I had boosted it up. I knew that there was a very good chance I wouldn’t be seeing my family again, but then I started to get mad, really pissed off. And that’s not a good thing to do when someone has a gun pointed at your head. I told myself that over and over again, but I still got more pissed by the minute. 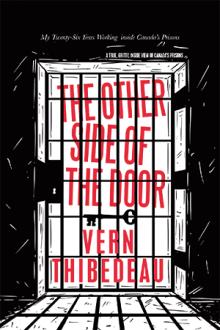 The Other Side of the Door
Vern Thibedeau
$20.99

For Canadian corrections offi cer Vern Thibedeau, it all began at “Disney World”—or at least the penitentiary that ironically carried that nickname.

Within ten months, he is seriously injured. One year later he has a pistol aimed at his head during an incident in which two officers and a civilian are shot. Four years later, an inmate murders a correctional offi cer, who is Vern’s friend, and a food steward.

Over the course of a career spanning twenty six years, Vern was assigned to fi ve different prisons, but his time behind the stark walls of Kingston Penitentiary was his most difficult. During his assignment there, he dealt with some of the most notorious and dangerous inmates in Canada’s history, such as Clifford Olson and others as bad as Paul Bernardo and Russell Williams. He was part of several hostage incidents and was taken hostage himself once.

The stress of his job manifested itself in a variety of physical and emotional injuries, and he found himself forced to take time off to recover. It all culminated during a horrific time when a sex offender is taken to segregation and his victim is approximately the age of Vern’s own daughter. It all struck a little too close for comfort.

Later, Vern worked closely with police while investigating a fellow officer who was also a friend. After retirement, Vern is contacted by the police who request more information regarding the investigation.

These are his true stories of his years working behind the bars.

For twenty-six years, Vern Thibedeau worked in five different facilities within the Canadian corrections system, including Kingston Penitentiary in Ontario. Now retired, he works as an independent security officer. He lives outside of Toronto, Ontario, with his wife.