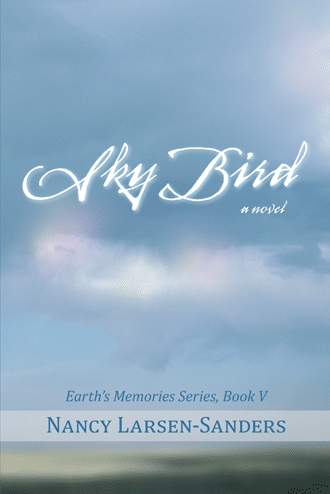 Where a big draw spilled out of Van Ricker’s pasture into her own, Deborah wrinkled her nose at the foul odor that the wind brought to her. Van Ricker had lost a cow as far back as October, and the word was that the cow’s teeth had been ground down to uselessness by dirt in the feed, starving her to death. The stench had been hovering ever since. August had lamented to Deborah, “Tony should have noticed the cow’s condition long before it got so bad. Should’ve put her out of misery long before.” There was a stricken look on the old man’s face. He hated to see any animal suffer. The scree of a hawk turned her eyes upward. The large-winged bird soared in ever-widening circles until it disappeared over the wall of Van Ricker’s canyon. The hawk was undoubtedly headed for the dead cow—even death had its attractions. Moving on, she headed up to the knoll where Marco crouched. She twisted and turned in the saddle, looking for anything out of the ordinary. There was only the dust-ridden sky. That was no longer unusual. She rode to the south end of the pasture and opened a gate that led into her half-section field that had once been a separate, fenced pasture. Dalton Strong had left the fence standing when he broke out the buffalo grass to grow wheat. The fence was well made, three strands of strong barbed wire fastened to yellow rock posts. It was a fine fence, and she wanted to keep it in good condition in case she planted the field back to grass. Marco ran ahead of her, swerving about, his nose to the ground. At a distance, a rabbit sprinted away, raising its own little trail of dust, and Marco watched. The uneven ground was hard riding due to its drill rows, but she was grateful for the ridges. They held stubble from last year’s sedan grass, a drought-resistant fodder crop. Its roots were successfully holding the soil down, although some dust had blown in last night, apparently from Van Ricker’s field to the west; the loose soil had fanned out within the stubble instead of forming drifts. That was good—for her field, not his. She heard Marco growl; he stood a short distance from the southeast corner of the fence, his body rigid, hackles raised. A brown grocery wrapper appeared to be flattened against the corner post and barbed wires, held there by the wind and flapping up and down, its edges stirring the soil drifted against it and creating brief clouds that fogged the air. Packed in and around the post and wires, tumbleweeds and other dried growth provided a base for the drift that was peaked and scalloped like blown snow. Deborah rode her mare closer. A few yards from the fence, what had looked like grocery paper was not. Her heart thudded as she swung down from the saddle to peer more closely. What she saw caused her to thrust her shoulder under the horse’s comforting neck and head, and her hands cupped Lady’s nose and mouth. A person’s arm and shirt were caught in the wires, along with the metal clasp and button of an overall strap. Nothing else could be seen because of the blown dirt—except a foot, twisted unnaturally, the dangling laces of its scuffed shoe blowing in the wind, leaving tracings in the drift much the way a bull snake might do. Gasping from the shock of seeing someone’s feet protruding from a drift of blow dirt and an arm hung up in a guy wire, Deborah reluctantly but hurriedly crawled through the fence. It wasn’t the wind that sent a bitter chill down her back. Here was the source of her anxiety. She squatted and dragged dirt away from a body small enough to be a boy. She dug faster at the drift, hoping yet knowing no one could breathe with his nose and mouth covered by so much soil. He was a young boy she recognized, only nine years old, the same age as David. His skin was colorless and frozen. He was sandy haired and blue eyed with long, blond eyelashes. “Aw, Robby,” Deborah wailed softly. She lost the balance of her squatting position, and sat in the dirt, bending her knees to sit cross-legged. “Robby,” she cried again. She removed her gloves, took off her face mask, and pulled her cap closer about her face, beginning a slight rocking motion of her body. Her fingertips gently brushed the dirt from the child’s face. There were punctures near his left eye, probably caused by the barbs of the fence. Beads of blood, ruby red and glistening, curved from the eyebrow downward, and the trail of blood had frozen before the dust covered the face. “Robby,” and this time she sang a keening chant. Adding sounds and rhythms taught many years ago by Blue Sky, Deborah mourned over the boy. His name was Robert, but no one, including his parents, Wave and Jenny Vogl, called him Robert. He had always seemed younger than he was, and the diminutive version of his name was used. She chanted a song of grief, Hopi words she couldn’t translate, didn’t need to translate, for the rhythms and tones communicated the sadness of the loss of a soul. Tears ran down her face. The dirt covered a good share of his body, and the sleeve of one arm was entangled in the post’s guy wire. His fingers, cold and stiffened, seemed to be reaching out. He wasn’t wearing a coat or face mask, and his shirt collar was hung up in the barbs. Another barb had torn his pant leg.

On a frigid January night in 1937, a fierce windstorm arrives in an already ravaged western Kansas, bringing with it the most tragic of Deborah Nelson’s experiences with the Depression and Dust Bowl on her western Kansas farm.

Deborah has already seen more than her share of hardship in the years since her husband, Christian, disappeared and left her a single mother in charge of their farm. For six years, Deborah and her neighbors, Victor Whitesong and the Goodmans, have valiantly battled relentless windstorms with limited success.

Now, as a new year of drought and dust begins, Deborah rides out to check her fences and finds a neighbor’s child dead in a drift of dirt. Sadly, it is only the beginning of more challenges. Measles hits the community’s children, including Deborah’s son. Desperate for help, Deborah must send her remaining children away. Emotional and health problems worsen in the community. In the meantime, she must deal with Sheriff Stoddel, who hates her because he believes she is Indian. He is convinced she and Victor have killed Christian. The only saving grace is her loving relationship with Victor, as she hopes for rain and prays that a world war is not imminent.

Sky Bird continues the saga of one woman’s struggle to endure adversity and find joy in the uncertainty pervading America in the late 1930s.

Nancy Larsen-Sanders, a former college teacher of composition and literature, creative writing, and English as a second language, also taught secondary learning-disabled students in the Colby schools in northwest Kansas. This is the fifth book in her Earth’s Memories series. Nancy and her husband, John, live near Colby.